Real Locations Used to Create the Strange World of 'Tenet' 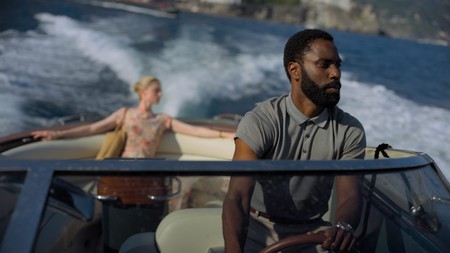 Much of the film 'Tenet', starring John David Washington, takes place on or around open water | © Warner Bros. Entertainment Inc.

Filmmaker Christopher Nolan’s latest offering is a mind-bending science-fiction blockbuster that creates a fantasy world using popular destinations around the world. Find out how the director managed to capture the stunning visuals and locations in the movie Tenet without the aid of computer effects.

The film Tenet (2020) is almost impossible to describe. The concept is all about playing with time, creating a series of events that take place concurrently, with the action going both forwards and backwards in time. There are elements of espionage throughout (we think), and the main character is played by John David Washington, who is known simply as the Protagonist.

One of the most striking things about Tenet is its use of locations. Everything you see on screen was shot for real without the use of in-camera effects, so when a sequence features a plane blowing up as it crashes into the side of a building, that’s exactly what was filmed.

As with his previous films Inception (2010) and Interstellar (2014), Nolan has been incredibly astute with his selection of settings for the movie, finding places that have a distinctive look and a familiar feel, but can also offer a layer of otherworldliness.

“The international component of Tenet is very important because it’s about a threat to the entire world – to existence as a whole – and those stakes are integral to the drama,” Nolan says. “So, I think having that global feel is crucial to the rhythm of the film and the building of scope and scale.”

Here’s a look at where Tenet takes us on its perplexing world tour.

The opening of the film centres around a siege in a Kiev opera house. The Linnahall in Tallinn was used for this sequence, with its brutalist architecture and grand scale perfect for the movie. The building was completed for the 1980 Moscow Olympics, when Estonia was still part of the then Soviet Union. It overlooks the Baltic Sea, but a huge amount of work was required to reconstruct the interiors, which hadn’t been touched for more than a decade. It’s hoped that the updates made by the film crew will help the city preserve the building in years to come.

Another pivotal scene that was filmed in Tallinn is an adrenaline-fuelled heist that turns into a time-bending chase. The Pärnu highway and Laagna Road, busy freeways that run through the centre of the Estonian capital, were taken over by the team, with more than 8km (5mi) and six lanes of tarmac closed off for the shoot.

Also making a cameo appearance are the Kumu Art Museum and the harbour area, which was used as a stepping-off point for the Protagonist. 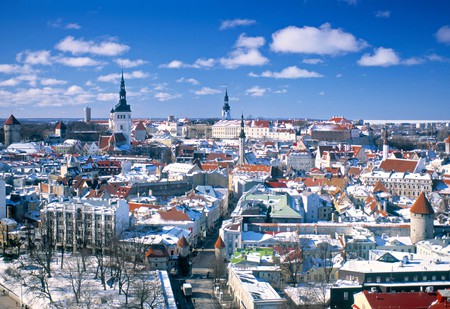 The sea off the Amalfi coast plays host to one of the major scenes in the movie. Menacing Russian billionaire Andrei Sator (Kenneth Branagh) maintains a healthy distance from the rest of society and conducts much of his business from a luxury superyacht moored out at sea.

The Amalfi coast is one of Europe’s most prestigious holiday destinations, with quaint villages dotted along the shore providing incredible backdrops. For Tenet, a crucial scene was filmed in the small town of Ravello, where a restaurant is the setting for the first meeting between Sator and the Protagonist. Most people, however, will struggle to take their eyes off the coastal views in the background.

Some sequences in the film see the yacht head off to Vietnam, but these, too, were filmed off the coast of Italy. A quiet spot, away from the distinctive buildings the area is known for, was found and used as a stand-in.

Next we’re off to Mumbai, where we are introduced to Robert Pattinson’s sarcastically erudite Neil. The character looks perfectly at home hanging around the ruins from a bygone era – dating back to when the British ruled India.

Modern Mumbai, however, is far different to the place often romanticised in old literature, and Nolan was keen to use one of the city’s many skyscrapers. As soon as the Protagonist and Neil team up, they have to pull off a daring infiltration of a high-rise tower in Breach Candy to reach a target they believe has more information.

Mumbai native Dimple Kapadia is a hugely respected Indian actress who thought she had seen it all before, but even she was taken aback by the scale of the production. “I’ve never experienced this kind of a shoot,” she says. “Coming to India and putting everything together on such a massive production was absolutely awesome. It was so organised and so beautifully done that it was like clockwork. Everybody was just gobsmacked at what Chris and his crew accomplished there.”

The production also filmed at the iconic Gateway to India, a stone arch that leads into the Arabian Sea. 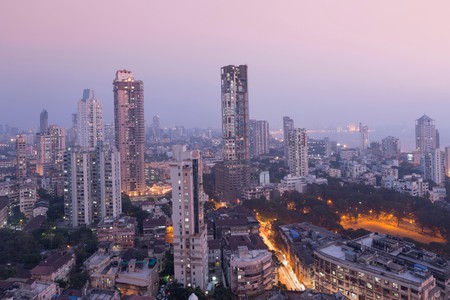 Skyscrapers reach up from the city of Mumbai, which Nolan was keen to feature in his film | | © robertharding / Alamy Stock Photo

Some scenes in Tenet are set in London – notably the one in which the Protagonist meets a British agent (Sir Michael Caine), and the scene at Shipley’s Auction House, where he first makes contact with Sator’s estranged wife (Elizabeth Debicki) – but most of the UK shoot was conducted on the south coast.

As you will have gathered already, a lot of the film takes place on or around open water, and for one such scene involving a thrilling catamaran race, the crew moved from Italy – where the scene is meant to take place – and shot the sequence in Southampton. Production took place just after Cowes Week, the biggest racing regatta in the world.

Oslo’s modernist harbour makes a fitting backdrop in the scene where the Protagonist and Neil discuss the specifics of the high-tech heist they need to undertake to get close to their ultimate target. As the pair wander around the city near Tjuvholmen, they eventually end up on the roof of the Oslo Opera House. The angular façade of the building makes it one of the most famous structures in Norway, and it has become a popular hangout. If you visit, you are welcome to climb up the sides and even take in the view from the top, so you can recreate the scene in the movie to your heart’s content. 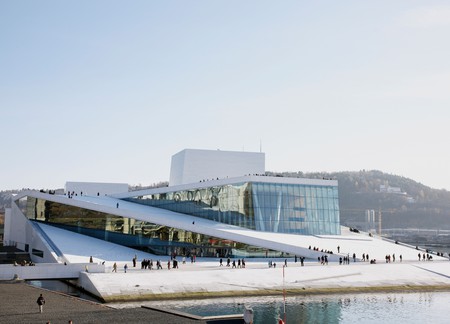 One of the most striking scenes from the film’s early trailers featured vast wind farms in the middle of the sea. One of these huge wind turbines is where the Protagonist has to await further instructions before he can undertake his mission. For the exterior shots, Nolan used Nysted wind farm off the coast of Denmark. The film also required shots at sea on an icebreaker ship, and these were filmed near the town of Rødbyhavn.

Even though the heist that the film centres on is set in Oslo, the trigger point is a plane crash into the side of a secure building. To pull this off, Nolan used an airstrip in Victorville, California. The relatively calm surroundings of the Mojave Desert helped create the required atmosphere for the scene. LAX also stood in for Oslo Airport.

Three other Californian locations were used for the elaborate finale. To create the look of an abandoned Serbian town, the filmmakers decided to use Eagle Mountain, a ghost town in the desert not far from Palm Springs. The old iron-ore mine had just the right aesthetic, and the crew supplemented it with scenes shot at the Warner Bros Studios in LA and a shut-down mall in Hawthorne.