Unique New Year's Eve Traditions From Around the World

While dazzling New Year’s fireworks ignite skies around the world, many unique traditions illuminate little pockets of the globe as well. From smashed plates and scarfed grapes to pink undies and burning effigies, here are some of the weird and wonderful ways people across the planet bring in the new year.

Filipinos gobble grapes… and oranges, and watermelons, and apples and cantaloupe. The custom is to gather 12 different fruits — one for each month of the year — but they have to be round, because that represents wealth and prosperity. It’s all about those cash dollars in the Philippines — locals also wear clothes carrying polkadots and stuff their pockets with round coins to cash in on the ritual.

Throwing paper out the window (Argentina)

The pieces of confetti fluttering through the streets of Buenos Aires around lunchtime on December 31 appears celebratory, but the explanation behind the custom is more practical: Argentines shred all their old documents and papers before the the curtain falls on the year, to symbolise leaving the past behind. It’s hardly the most hazardous thing flying out of windows around the world on New Year’s, though — many other Latin American countries are fond of throwing buckets of water, while South Africans inelegantly deposit their old furniture onto the street from great heights. 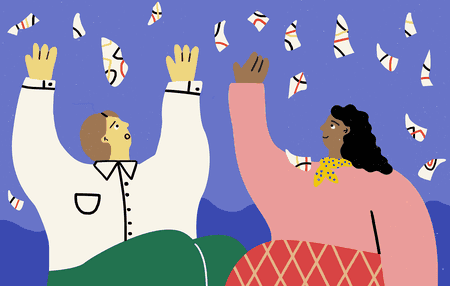 If you want to make a new Danish friend for the new year, smash a plate against their door. The tradition is meant to bring the recipient good luck for the year ahead — the bigger the pile of shattered crockery on your welcome mat, the more good fortune you receive. Danes also jump off chairs to literally leap into the new year (hopefully avoiding any smashed tableware upon landing), and stay glued to their TVs for Queen Margrethe’s annual address plus a screening of black-and-white German comedy Dinner For One (known in Denmark as The 90th Birthday).

What began as an excuse for grape-growers to shed their excess produce a century ago has blossomed into a much-loved Spanish tradition, with Spaniards scarfing down grapes to each stroke of the clock at midnight. Each of las doce uvas de la suerte (the 12 lucky grapes) provides one month of good luck — completing the challenge means a full year of fortune, but fall a couple of munches short and you mightn’t have much to look forward to next November and December. 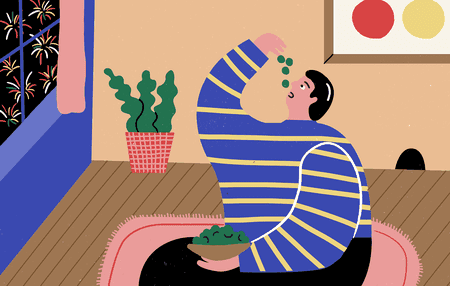 Ecuadorians say ‘adios’ to the old year by incinerating huge effigies, or viejos, representing the old year. Families construct these enormous scarecrows out of paper and old clothes, pop a painted mask on top (anything from beloved cartoon characters to hated politicians), then ignite their creations when the clock strikes 12 to put the previous year to bed. Ecuador also shares a tradition with next-door neighbours Colombia of walking around the block with a suitcase, representing all the travel they’ll enjoy in the new year.

Argentines looking for love also don pink underwear, and they’re not the only ones paying so much attention to their undies on December 31. Red lingerie in Turkey flies off the shelves, Mexicans and Bolivians slip into yellow underpants for luck, red is worn around the Mediterranean to court love, while Brazilians wear white for good fortune, which seems to be tempting fate given how risky that choice of underwear colour is. 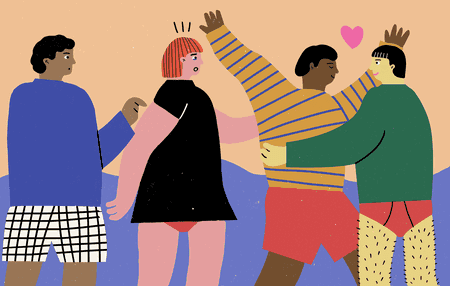 Finns are able to see into the future — and it looks a little something like a melted piece of metal. The Nordic tradition involves melting a small horseshoe (for luck, of course) then tossing the molten metal into a bucket of cold water, where it re-hardens into a warped shape that predicts your fortune for the year ahead. Bubbles? Great, money’s on the horizon. Tin breaks up in the water? Yikes, that’s not good.

Talking to the animals (Romania)

Dr. Dolittle, eat your heart out. Romanian farmers spend their New Year’s trying to communicate with their livestock, earning good luck if they succeed. And the unusual Romanian New Year’s traditions don’t end there — people also throw coins into rivers for luck, and dress up in bear skins then dance and play instruments from door to door, a ritual that’s intended to ward off evil spirits. 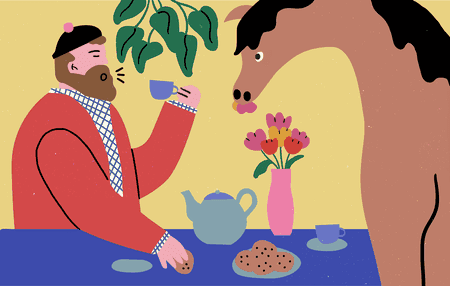 Putting mistletoe under the pillow (Ireland)

Single women in Ireland do a little more to find a hubby than simply slipping into a new pair of knickers. The Irish custom entails placing mistletoe — the wild berry associated with fertility in European mythology, and a kissing magnet over Christmas — under your pillow on New Year’s Eve, then burning it in the fire the next day in the hope of luring love in the next 12 months. Another unique Irish tradition involves hitting the walls and doors of your home with Christmas bread to ward off evil spirits.

We can’t finish an article about New Year’s without mentioning Hogmanay and the strange Scottish customs that accompany it. The legend goes that a strapping man is meant to rock up at your front door at midnight carrying whisky, coal, short bread and a black bun (fruitcake), and the tradition continues today, with the first person to cross the threshold of a home in the new year bearing gifts. There’s also plenty of fire, derived from pagan influences — Edinburgh’s torchlight procession on 30 December fills the streets of the capital with a sea of light, while locals in Stonehaven spend their Hogmanay parading through the streets wielding enormous fireballs.

This article has been updated. It was originally written by Stephanie Carwin and published in December 2015.