The Ultimate Guide to Pancakes From Around the World 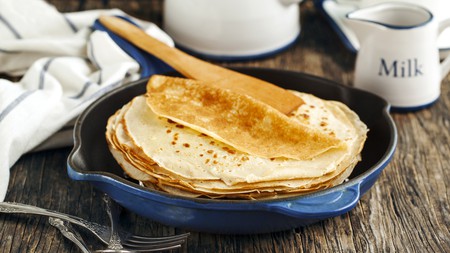 Pancakes of some description have popped up in all forms, all over the world, as an integral part of the global cuisine. To celebrate this most varied of snacks, Culture Trip has compiled a list of pancakes from around the world for you to seek out on your travels.

One of China’s trickiest pastries, cong you bing, or scallion pancake as it’s better known internationally, is an unleavened flatbread made from dough rather than batter, and packed with handfuls of chopped spring onions (scallions). The dough itself is folded over multiple times, much in the same way that croissants develop their layers, to create the signature flakiness associated with the pancake. Cong you bing is further enhanced by the sweet, nutty flavour it gains from being fried in toasted sesame oil. 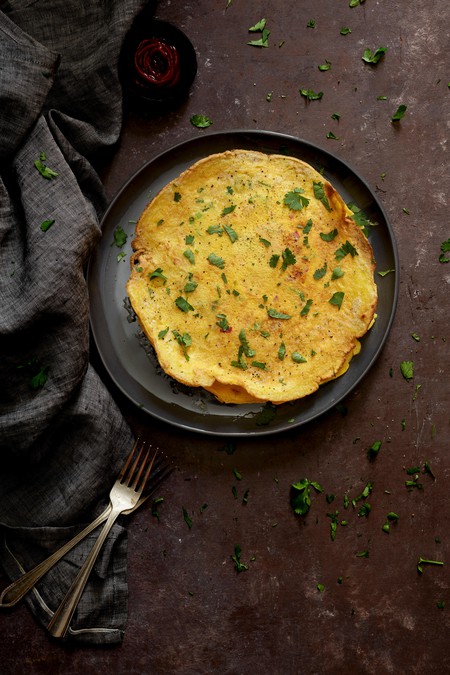 Made from buckwheat flour, which lends this pancake its particular nutty flavour (and its health benefits, in a loose sense), the Breton galette is a versatile platform for all manner of sumptuous French fillings. Very often topped with a fresh egg, cracked directly into its centre as it cooks, as well as chopped ham and cheese, the Breton galette makes for a delightful rustic lunch, especially if the sun is high, the weather is warm, and the local red wine is plentiful and on standby. 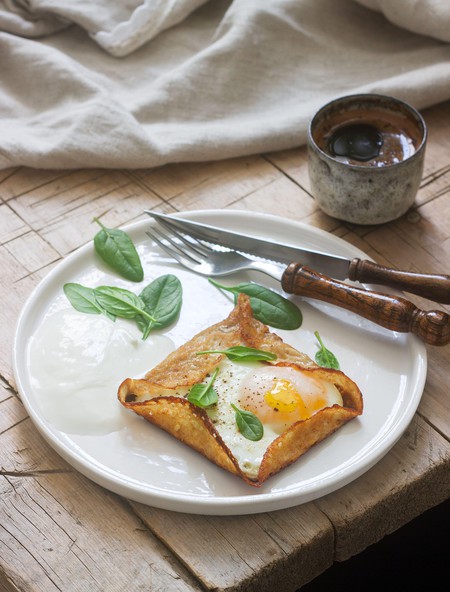 A ubiquitous staple of South Indian and Sri Lankan cuisine, this wispy-thin pancake is made from rice and lentil flour, fermented for days to lend it a crispness and tang. Typically served rolled up and stuffed with everything from paneer curries to dals, and as an accompaniment to chutneys, dosas are quick, convenient, and – great for South India’s vegetarian population – free from meat or fish. 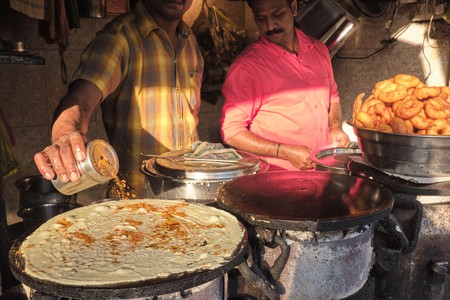 Made much in the same way as the famous latkes of Jewish cuisine, the raggmunk is a pancake made from raw grated potato, cooked in little discs with plenty of butter and eggs to bind, fry and flavour them. Frequently served with pork and lingonberries, raggmunk are especially popular in the winter as a hearty and fortifying dish which helps stave off the chills of the bleak Scandinavian December. 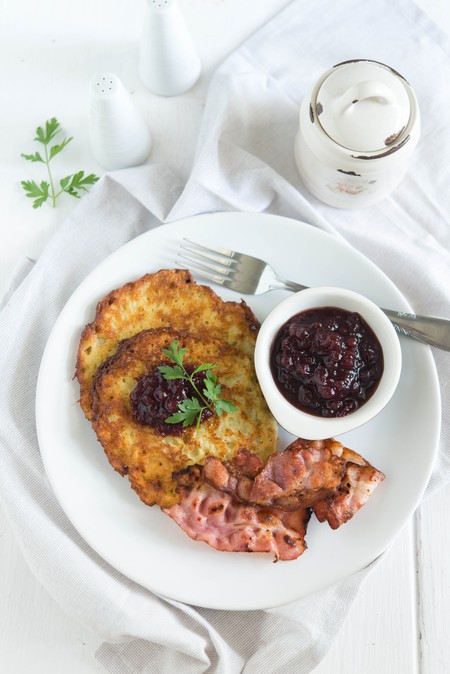 These thin, buttery pancakes are made from semolina, which is worked into a dough, stretched until thin, and then usually fried in lashings of clarified butter. They are occasionally stuffed with fillings, can be baked rather than fried and – unusually for pancakes – can be served in squares rather than rounds. Msemen are an essential part of the Moroccan breakfast, alongside cups of sweet mint tea. 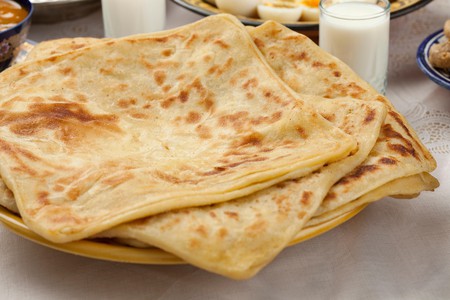 An essential banchan (side dish) order at any Korean barbecue, kimchijeon is as it sounds – a pancake made from chopped kimchi, flour, eggs and the spicy brine which the kimchi has fermented in. Bright red, spicy and crispy, it’s a favourite across Korea – a quintessential Seoul street food snack, usually served with spoonfuls of ground pork or soy-ginger dipping sauce. 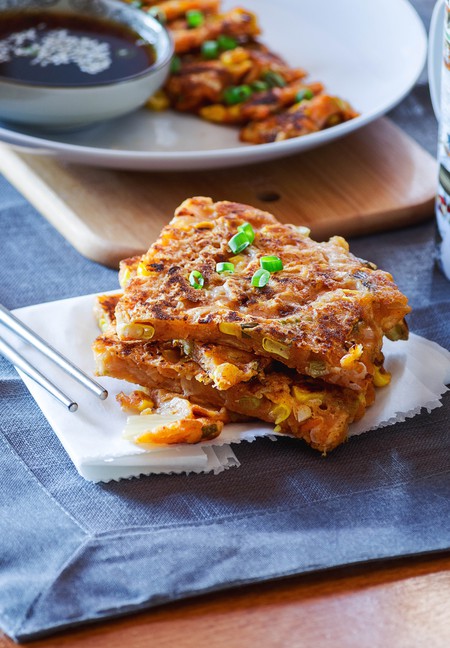 Tangy and crispy, kimchijeon can be found everywhere in Seoul | © CreatiVegan.net / Getty Images

Cooked almost like the classic Yorkshire Pudding so often found at the sides of the traditional English roast dinner, the Dutch baby is a large, sweet pancake baked in a cast iron pan in the oven. Large and puffy, the thick batter wrinkles as it cooks, collapsing at the centre to produce ample space for fillings. Most opt for lemon juice and sugar, but the Dutch baby can be piled high with fruit, syrup or anything you could think to adorn it with – get creative. 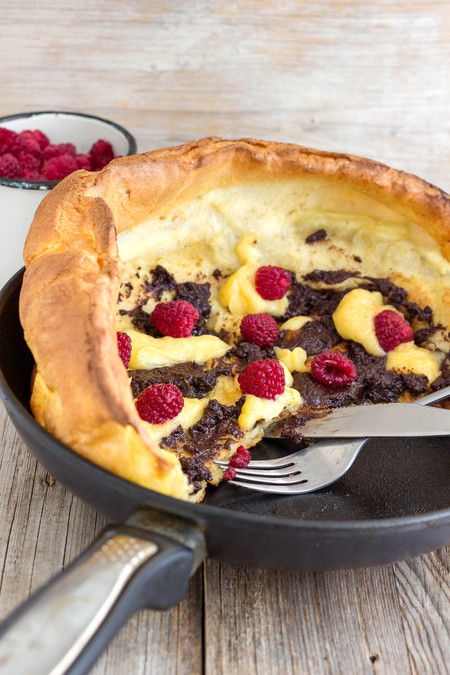 Translating from Malay as ‘net bread’, roti jala are made by drizzling a wheat flour batter onto a hot pan in a circular motion, so that each string of batter sets separately, creating a lacy net or web of batter. Delicate and crispy, and best served immediately after cooking to prevent them going floppy, roti jala are typically eaten with curry. They are not often served at the street stall, but instead at social gatherings, owing to the fuss it takes to perfectly prepare them. 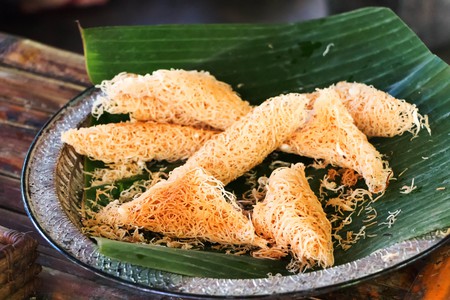 Roti jala are difficult to make, but a delight to eat | © photograph by dorisj / Getty Images

Nothing conveys elegance and sophistication quite like the blini: the miniature Russian pancake that can only ever be eaten with some combination of sour cream, caviar, smoked salmon or dill. Made from wheat or buckwheat flour, blinis are notoriously difficult to master, with their shrunken form and temperamental batter making them a challenge to produce with consistency. 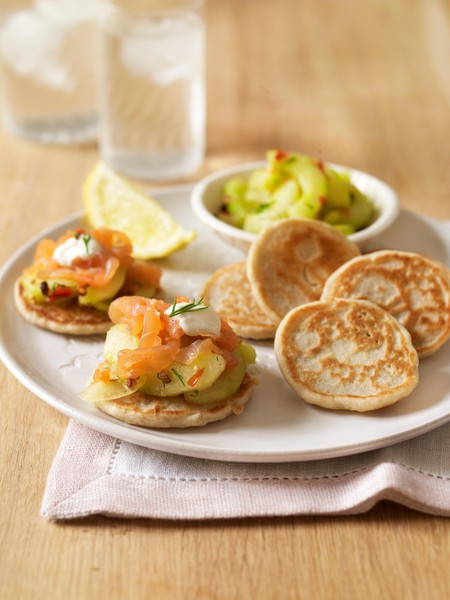 A favourite of classy drinks receptions everywhere, the blini is perhaps the most elegant form of the pancake | © Dorling Kindersley ltd / Alamy Stock Photo

Made from teff flour (a grain not unlike quinoa), and fermented until pronouncedly sour, the spongy texture of injera is unlike any other pancake you could find. A cornerstone of Ethiopian and Eritrean cuisine, injera serves as both the plate and the utensils for most stews and dishes. Lentils, vegetables and slow-cooked meats are heaped onto trays of the stuff, and diners are encouraged to simply rip up scraps and pinch mouthfuls away from the mounds on top of the pancake. 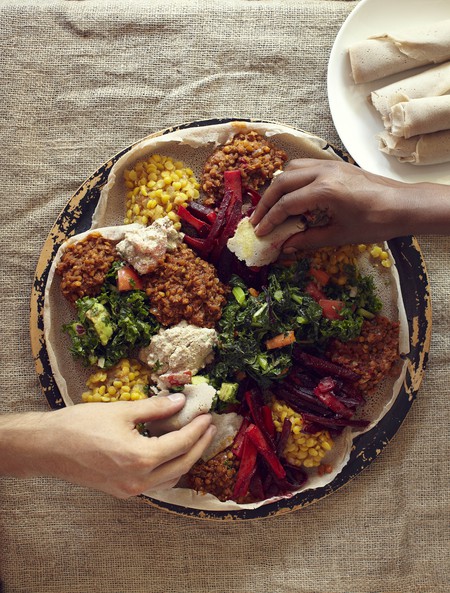 Æbleskiver are bite-sized little puffs of pancakes, cooked in a special stovetop pan with multiple spherical indentations that cause the pancakes to rise into a fat ball shape. Their name literally translates as ‘apple slices’ in Danish – not for their flavour, but for their shape, which mimics the wonky roundedness of a newly picked apple. Airy and light, they’re traditionally served with jam for dipping, and are sprinkled with powdered sugar. 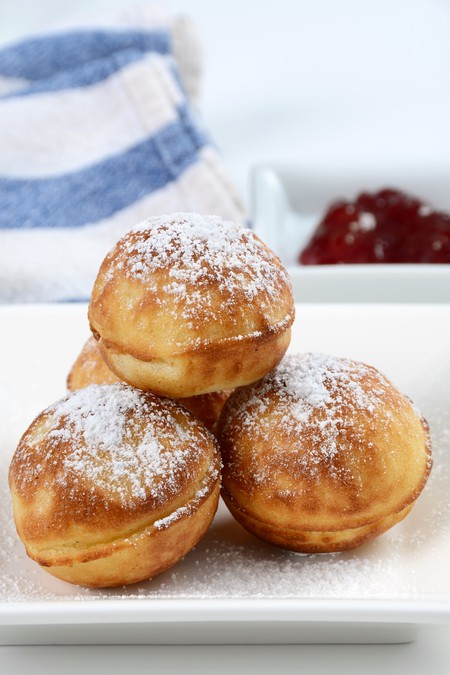 There’s nothing like a punnet of freshly fried Æbleskiver, dusted with sugar | © ClarkandCompany / Getty Images

Made from chickpea flour, water and olive oil, and coveted all along the French Riviera, farinata is the perfect snack. Known as socca in Nice, panisse in Marseille, and countless other things across Italy, farinata is baked in wood-fired ovens in gigantic cast iron tins, and then slashed into slices and scooped up into napkins for passers-by. It can be layered between bread to be eaten as a sandwich or topped with fresh rosemary and pepper and enjoyed as is – the people of Nice strongly believe that it can only be enjoyed at its best with a cold bottle of rosé nearby. 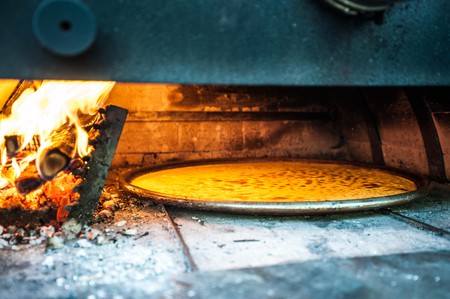 Named from the Vietnamese for ‘sizzling pancake’ – on account of the aggressive sizzling it does when it hits the pan – bánh xèo is a classic street dish in Southeast Asia. Made from rice flour, water and turmeric (which gives it its distinctive yellow tone), bánh xèo is often served packed with vegetables, herbs and meat, yielding a fresh, sour and savoury bite that once you try, you’ll find it hard not to become addicted to. 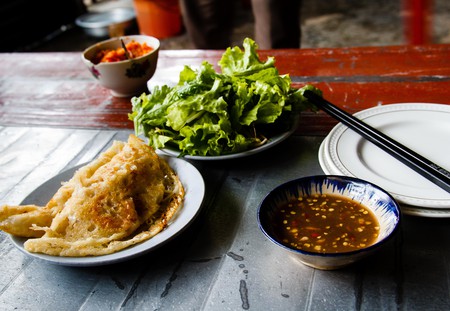 Herby and sour, bánh xèo is a pancake like no other | © Dang Thach Hoang / Alamy Stock Photo

As pivotal to Venezuelan and Colombian cuisine as the tortilla is to Mexican cuisine, arepas are a starchy pancake made from maize flour, more similar to an English muffin than a crêpe. As a result of their additional thickness, arepas are often sliced through the middle and stuffed with all manner of fillings: from shredded meats and chilli sauce, to spoonfuls of refried beans, to heaps of cuajada – a fresh cheese made with ewe’s milk – and avocado. Arepas are served across the northern region of South America. 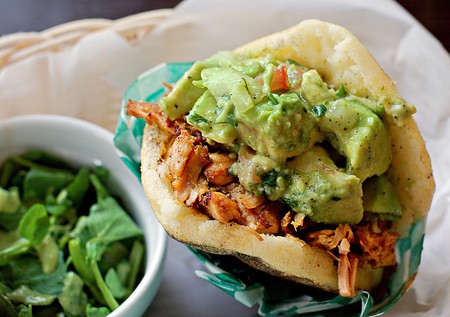