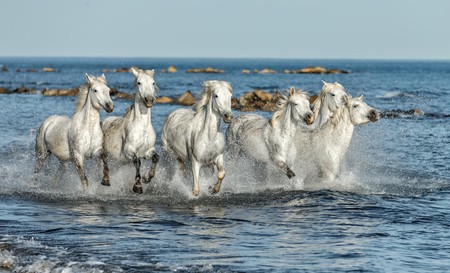 From towering fjords, to crystalline lakes and wild waves, Europe offers an abundance of wild exploration. Whether you’re seeking a break from the smog, desirous of adventure and thrills, or just in need of some holiday inspiration, here are 12 wild destinations that excite and intrigue.

In North East Poland, near the borders of Russia and Lithuania, lie the breathtaking Masurian Lakes. A perfect place to satisfy your water sport urges as well as historical curiosity. Take a kayak trip, a stroll amongst bisons through the Białowieża forest, and a tour of Hitler’s wartime headquarters, the Wolf’s Lair. 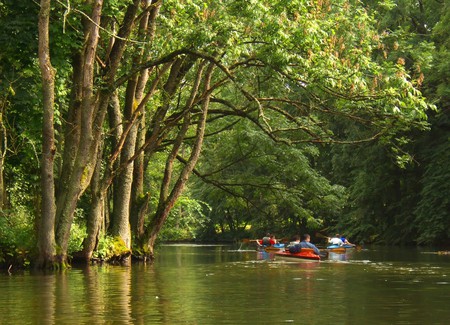 When visiting the Western Fjords, it is impossible not to feel that you have traveled back to the beginning of time. The air is crisper, the colours sharper, and the landscape feels untainted. In May, spring brings renewed life and in the winter, the stark contrast of white snow and nearly black waters elicits awe and admiration. Climb to the highest peak or canoe between the magnificent fjord walls at this spectacular, wild destination. 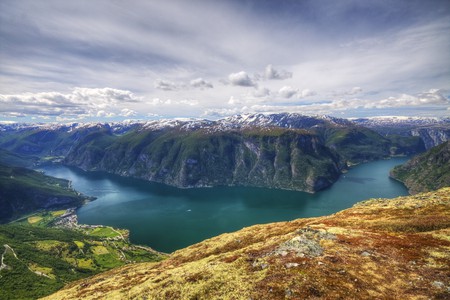 A walk through Dartmoor is stillness. When the light is right, there is an other-worldliness haunting the land that speaks bounds. Granite structures called tors jut out of the landscape, providing refuge for wildlife and climbing opportunities for visitors. It is easy to stumble upon a forgotten archaeological site, as the land is riddled with antiquities and prehistoric living spaces. Set off at sunrise, climb a tor, and as the sun rises read ‘The Bed of Tulips’, if you’re lucky you’ll see the pixies. 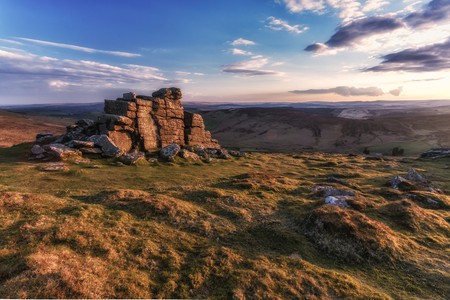 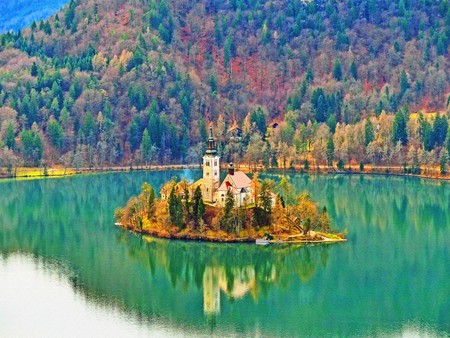 No one should leave the Black Forest without having savoured its namesake, Black Forest gateau. But even if you’re not into kirsch (the Black Forest is the only place in the world to find perfect cherries), the Black Forest offers an array of fascinating activities. From mysterious hiking trails to the curious Swabian-Alemannic carnival, this area of Germany conceals as much as it reveals, as the scenery is imbued with a sense of mystery. It is no wonder that myths and legends abound. If you desire a truly enlightening trip, be sure to read about the dwarves who lurk in the lakes and look out for the two monks from St. Blasien. 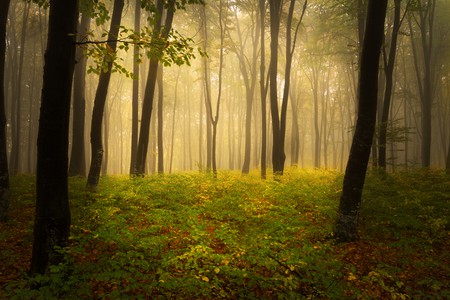 At the edge of Europe lies Connemara, a landscape that seems to stretch into infinity. Golden beaches, the rugged Twelve Bens Mountains, and the Roundstone Bog all come together in a composition so breathtaking you will wish you were a painter. With quaint villages dotted along this breathtaking landscape, enjoy the wild airs of Connemara by day and a warming pint of Guinness by night. 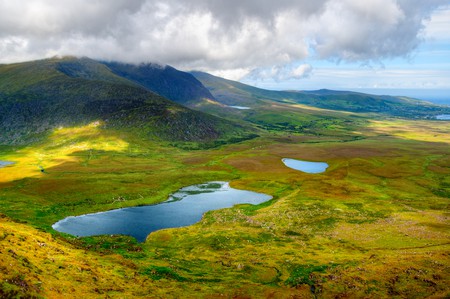 When you visit Kirkjufell Mountain on the north coast of Iceland, you encounter the universe. Sitting at 1500 feet above sea level, the combination of the Northern Lights and wondrous waterfalls is indescribable. The site can only speak for itself. 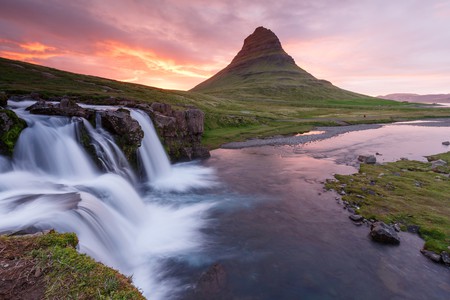 Scotland’s Argyll Coast is a secret waiting to be discovered. Walking along the coast and exploring the villages, the legends come alive and kings and queens seem to be just around the corner. Off the mainland, there are a number of inhabited and habited islands, all of which are saturated in beauty and history. Grab a boat and wile away your days on the open waters, observing the islands from afar. Alternatively, you can sail to Fingal’s Cave on the island of Staffa, or explore the distilleries on Islay. The Argyll Coast truly delivers. 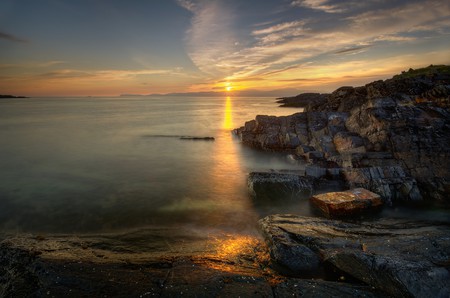 The All Wales Coast Path runs 1,400km, and is full of picturesque scenery. Whether looking for adventure or escape, the coastline will provide. One of the most striking parts of the coast path is through Pembrokeshire, also known as the ‘Land of Mystery and Enchantment’. With Neolithic tombs, Celtic chapels, and glutinous seals, this part of the Welsh coast breathes an eclecticism that is hard to match anywhere else. 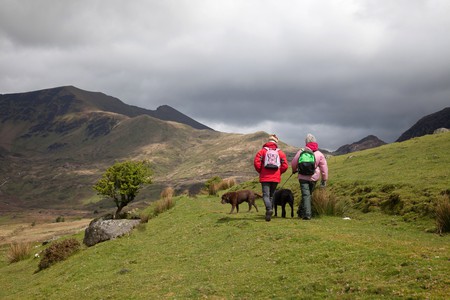 El Torcal Park Nature Reserve feels like an alien landscape. Its bizarre limestone rock formations seem to be a game was played and left unfinished. Clambering over the rocks, the setting sun seems like it might be replaced by two moons. Keep an eye out for the Montpelier Snake and Eyed Lizard, and if you’re lucky you might spot an Andalusian mountain goat, watching you silently from above. If you’re feeling adventurous, trying visiting at night, armed with a torch and a colorful imagination. 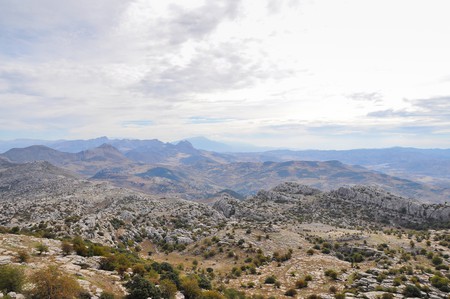 The Plitvice Lakes National Park awaits in central Croatia, near the border of Bosnia and Herzegovina. The area is comprised of 16 lakes that cascade into one another, creating waterfalls and bubbling streams of bold turquoise waters. A series of wooden walkways make it possible to wander through this blissful beauty as though part of the scenery. Feel the warm spray against your skin and marvel at the views. 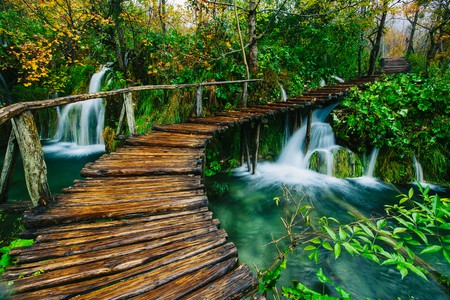 Lying between Arles, the Mediterranean Sea, and the Rhone River delta, the Camargue is a wetland of striking wildlife, a landscape that stretches endlessly into the distance. Camargue horses epitomize the wild abandon of this area living as they do in partial freedom. They are one of the oldest breeds in the world and studies show that they are closely related to prehistoric horses whose remains have been found in France. In an area inhabited by horses and their cowboys, flamingoes give an extra flavour that makes Camargue one of wild Europe’s most intriguing destinations. 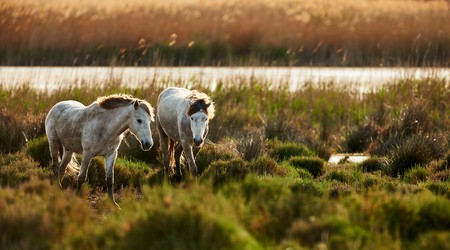