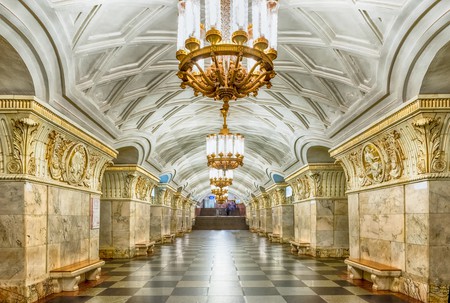 Forget the rats, the debauchery, garbage, and filth because these ravishing subway stations go against every negative underground horror story imaginable. Beautiful, vibrant and architecturally stunning, the hidden fortresses below are without doubt the most incredible concrete abysses you will ever see – we promise, they’re totes amazeballs.

This exposed rock organic beauty looks more like a giant cave than it does a subway station. You’ll also find a few old demolished buildings and relics scattered throughout.

Nearby attractions: Museum of Anna Akhmatova and the Silver and Avtovo Circus.

The original site dates all the way back to high Victoriana of the late 1800s, but an £80m redevelopment in 1999 saw the station dramatically depended and redesigned in an awesome cyberpunk aesthetic. Totally worth it in our eyes.

Nearby attractions: The Palace of Westminster, Westminster Abbey and London Eye.

Skip the train and just go here to see the most sleek flower mosaics in the entire world. There’s thousands of them and they are all made out of colorful pieces of glass.

Nearby attractions: Casa Loma and The Royal Museum of Ontario.

Whilst Santiago’s subway system is very young, Mario Toral’s incredible murals tells the history of the nation in such an epic style that it’s too good to miss.

Exceptionally gorgeous blue chandeliers hang over the elaborately decorated concourse featuring images of pearl divers swimming through underwater paradises. So Dubai, if you ask us.

Nearby attractions: BurJurman Shopping Mall and the Dubai Museum.

This show-stopping subway station looks as though it should be in a Disney movie…Probably Frozen, if you ask us.

Nearby attractions: The Home Gallery and Naples Harbour

Grand, imperial, extravagant, palatial – everything you associate with Russia’s capital. This place is so lavish that it even inspired the great novelist Fyodor Dostoevsky (read Crime and Punishment and you’ll see what we mean).

The tiles say it all really. Go see it now.

Nearby attractions: The Great Citadel and Danube River.

Probably the finest example of subway chic you will ever see. That is all.

Nearby attractions: Brooklyn Bridge and One World Trade Center.

100 meters below ground, the amazing Pyongyang Metro system is one of the deepest commuter systems in the world. It’s also one of the opulent and most secret – too pretty to be hidden if you ask us.

Have you spotted anymore beautiful subway stations around the world? Share them with us on our @culturetrip Instagram page!