The Female Gaze: The Contemporary Artists Who Took Back Female Identity in Art 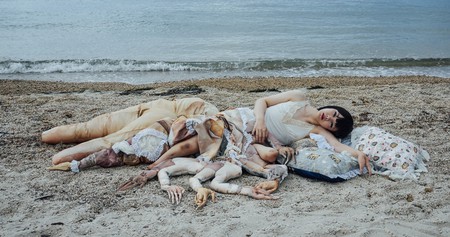 For centuries, the depiction and role of women in art was determined by men. These boundary-breaking female artists seek to redress this imbalance, surpassing the male-dominated barrier to reframe the representation of the female figure in art.

From a young age, Cindy Sherman loved playing dress-up, and that hasn’t changed in her 40 years as a photographer. In her portraits, she takes on the guises of hundreds of characters including the artist, the clown, the doe-eyed ingénue, the girl next door and the ageing socialite. Although she always uses herself as the model, at no point is her work self-reflective. Since making her Untitled Film Still series in 1977, Sherman has enjoyed a celebrated career. In 2011 she became the highest-selling female photographer when her work sold for $3.9 million, cementing the importance of her beguiling, if at times disturbing, photographs that lay bare the construction of personas, critiquing the artifice of female identity and societal stereotypes as well as our insatiable narcissism. 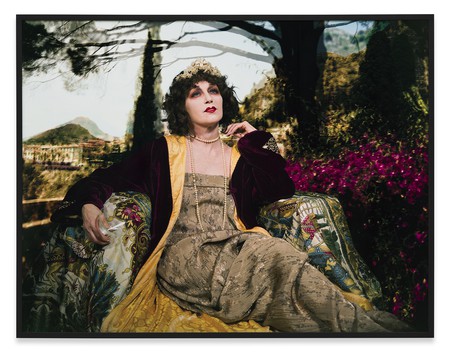 Mickalene Thomas’s rhinestone-encrusted paintings and collages question how female identity, especially that of black women, has been portrayed throughout art history. With vivid colours and patterns inspired by her vibrant childhood homes, Thomas’s work is electric and arresting. She rose to prominence for her work which appropriates iconic and provocative art-historical works by male artists like Courbet, Manet and Picasso, replacing the white female nude with black, African women. In doing so, Thomas reclaims ownership over the portrayal of feminine sexuality, celebrates female beauty and power and reflects on the importance of the female figure in contemporary art. 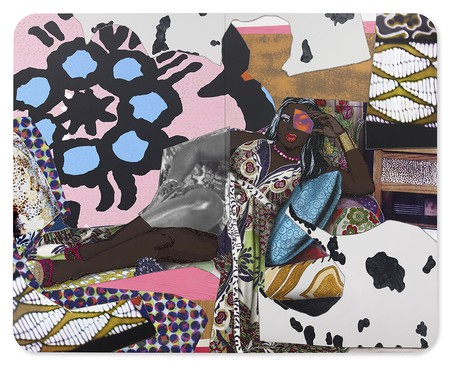 The experience of being a woman, particularly that of being a female artist in a male-dominated field, is a major subject of Judy Chicago’s work. Though probably best known for her large-scale banquet installation The Dinner Party (1974-79), which commemorates 39 important women in history, the influential artist has created an important body of work in the past four decades, including designs of female anatomy spray-painted on car bonnets, Bigamy Hood (1965/2011), and Birth Project (1980-85), which involved Chicago working with over 150 needleworkers to realise a positive portrayal of childbirth. Always challenging the status quo, Chicago’s work continues to celebrate women’s freedom of expression and respond to the lack of acknowledgement of women in our cultural history.

Where to see Judy Chicago’s work: National Museum of Women in the Arts, Washington DC, USA 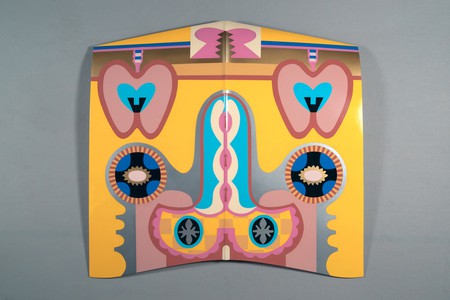 Although Francesca Woodman died exceptionally young, at 22, and never got to experience the international acclaim she garners today, the American photographer amassed a powerful body of work in her short career. What started as an exploration of her self-image in her early teens, when her father gave her a Yashica TLR camera at 13, transformed into an 800-image-strong photographic archive that probes the depths of the female psyche. In dilapidated, abandoned interiors, either in Rhode Island or Rome, Woodman positions herself in acts of uncertainty, making the private moment a public spectacle, to ultimately question the act of looking. 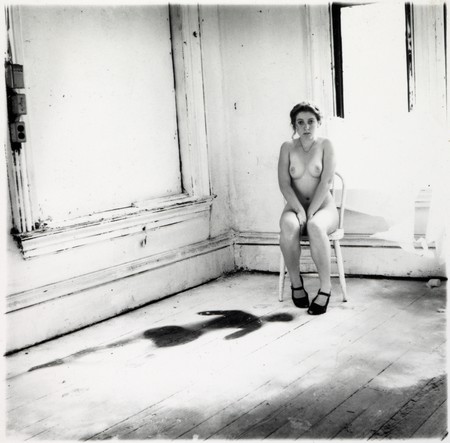 Emerging from the Young British Artists movement (YBAs) in the early ’90s after Charles Saatchi bought her entire Glasgow School of Art degree show, Saville is known for large-scale paintings that offer vivacious explorations of the naked female form, cellulite and all. Like many of the other artists in this article, Saville uses herself as subject, contorting her physical form and using impasto brushstrokes to critique society’s indoctrinated view towards the body. Drawing attention to all aspects of corporal existence, whether plastic-surgery reconstruction or the beauty of imperfections, Saville’s work is refreshingly raw and unapologetic in its complete frankness about the complexities and fragility of human flesh. 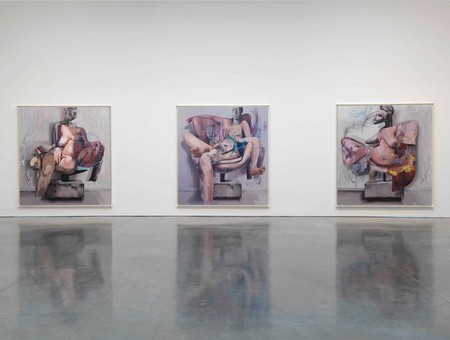 Born in Nairobi, Wangechi Mutu has lived in New York since graduating from Yale’s sculpture MFA program in 2000. Working across a variety of media, Mutu addresses the objectification of black women, our communal idea of beauty and the postcolonial depiction of her Kenyan homeland. Her collages in particular depict otherworldly female characters existing in organic, ethereal landscapes. By using the very material – pornographic imagery – that dehumanises women, Mutu creates empowered cyborgs that confront Western misrepresentation of the female body. 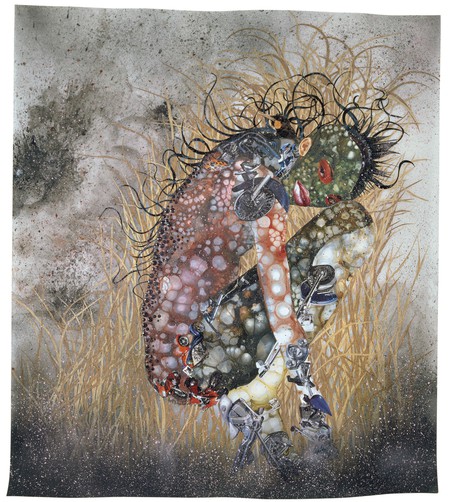 Wangechi Mutu, Hide 'n' Seek, Kill or Speak, 2004 | The Studio Museum in Harlem; Museum Purchase made possible by a gift from Jeanne Greenberg Rohatyn 2004.13.3 © Wangechi Mutu Courtesy of the artist and American Federation of Arts

The young British artist started taking photographs of herself in her grandmother’s house, unbeknownst to her relative. Taking the opportunity to explore the female self through a fictional character called Joyce when her grandmother was out, Calypso set a strong foundation to a practice which has candidly put the female figure in the fore of uncanny scenarios. Having won a number of art awards, the Londoner has also explored other creative fields and in 2018 produced Burberry’s Christmas campaign. Often she’ll create immersive installations in which her photographs can be viewed, placing the viewer directly within the environments where her defiant women exist. 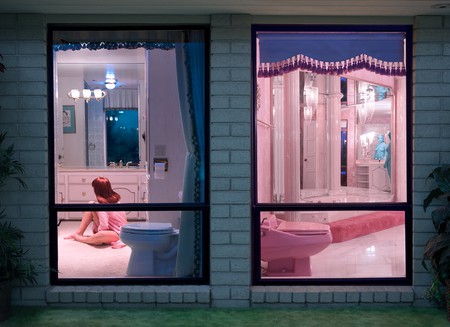 Juno Calypso, How Much Life Is Enough?, 2018 | Courtesy of the artist and TJ Boulting

The Viennese artist was a key figure of the Austrian feminist avant-garde movement in the 1970s and instrumental in the formation of the female artists’ group Die Damen (The Ladies) in 1988. Reacting to the repression of women and their prescribed roles, Jürgenssen was not afraid to subvert social stereotypes. Her work explored bodily existence and tackled social clichés of women existing solely within the limits of domesticity as well as being portrayed as objects in art. In one of her famous performative works, Housewives’ Kitchen Apron (1975), Jürgenssen wore a sculpture of an apron that doubled as an oven, morphing the artist into a domestic appliance. 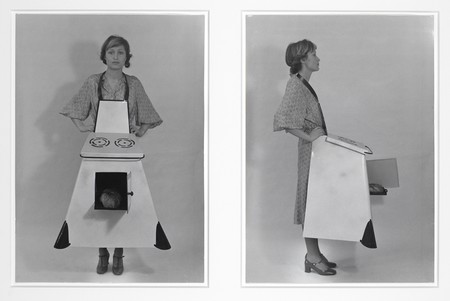 Rising to prominence in the post-punk scene of Manchester, UK, Linder’s work merges the worlds of men’s DIY and porn magazines with that of women’s fashion bibles. She’s known as the mastermind behind the Buzzcocks’ famous cover sleeve for their single ‘Orgasm Addict’, which features a naked woman with toothy smiling mouths for nipples and an iron for a head. Her feminist photomontages draw on Dadaist and Surrealist influences as well as the punk aesthetic. But her dynamic work isn’t always so overtly provocative. She recently unveiled a public commission for London Underground that celebrates the many roles women play in and around Southwark’s history. 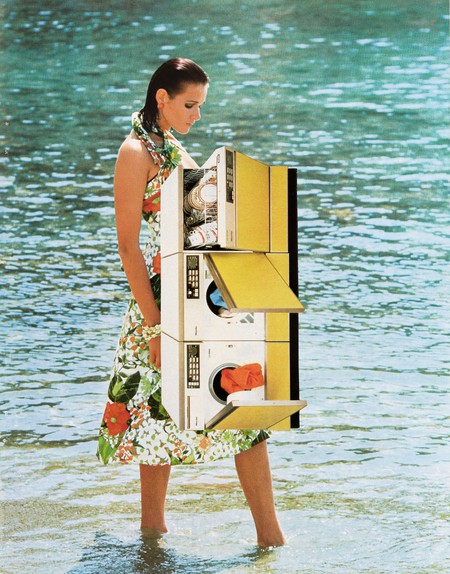 Born with tibial hemimelia – a deformity of the bones – the young Japanese artist uses her photography and sculptural installations to confront our notions of traditional beauty. Her disability, for which she was bullied and which led to both her legs being amputated below the knee at nine, is now the source of inspiration for her celebrated work which has brought her international acclaim. Just like Saville’s, Katayama’s work celebrates physical imperfections, which she feels are more representative of beauty than society’s version of the perfect body. 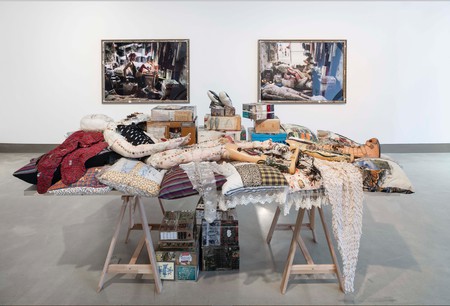