The Creepy Origin of the Word 'Nightmare' 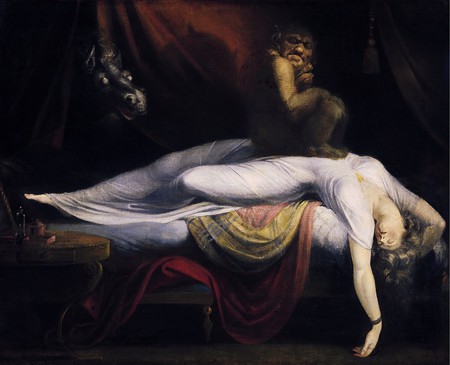 From teeth falling out to being late, or even being naked in a public place, a particularly vivid dream can wake us from a deep sleep. We’re all familiar with the uneasy, restless or downright terrifying feelings brought on by nightmares but the creepy origin of the word itself is less well known. To uncover its roots, journey back to a time when the intricacies of the human mind were strange and mysterious – and more easily explained by evil spirits and mystical beings.

Although, to modern ears in particular, nightmare might sound like something to do with a scary horse, the word actually has a different origin. According to the Oxford English Dictionary, nightmare derives from the Middle English (from the period 1150 to 1500) word ‘mare’, which meant a ‘female evil spirit thought to lie upon and suffocate sleepers’. This had developed from mære in Old English (the earliest historical form of the English language, brought to Britain by the Anglo-Saxons in around the 5th century) – so it’s clear concerns about anything that interrupts a good night’s sleep have been around for a long time.

Other cultures too had their own versions of the English ‘mare’, with many describing evil spirits, demons or goblin-like creatures which would ride on people’s chests while they slept, bringing on bad dreams. 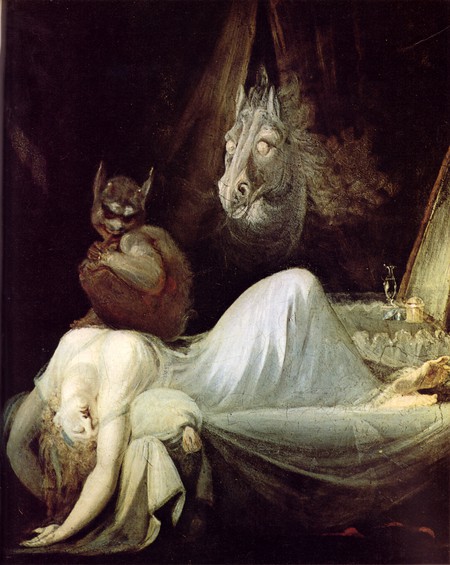 In Scandinavian culture, the mare features in Ynglinga saga, a legendary Old Norse saga from the 13th century. In it, Swedish king Vanlandi is killed by a mare which was conjured up by a Finnish sorceress after the king abandoned his wife. Shortly after falling asleep, Vanlandi calls out that a ‘nightmare rode him‘. It ‘trod on his legs so they nearly broke’ and then ‘pressed down on his head so that he died’.

In German fables, there are many creatures said to invade peaceful sleep. The alp, trud, mare, and mart are all malevolent nocturnal spirits associated with nightmares and along with them come a number of myths about how best to prevent them from entering the home. Plugging up the keyhole, getting in bed backwards, putting something steel in the bed, or placing a pair of shoes with the toes facing the door, are all said to ward off mares and therefore protect against bad dreams.

Some folk stories also have the supernatural creature riding a horse or even shapeshifting and taking on the form of animals. The prefix ‘night’ was later added emphasize that these demons visited at night, and over the centuries the term became generalized to refer to any frightening dream.