The 30 World Music Acts You Should See This Summer 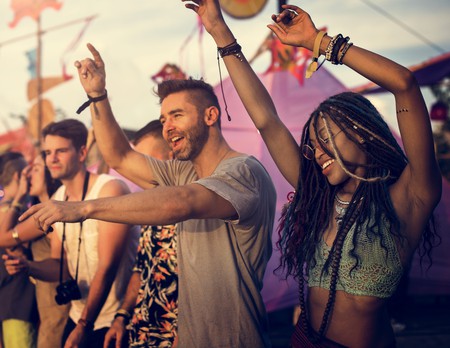 Whether it’s Womad’s multicultural mashups or the Africa Express sets that are so boisterous, Damon Albarn has to be carried off the Roskilde stage at 4am, world music is an indispensable part of the European summer festival calendar. From immersing yourself in Ibibio Sound Machine’s sweltering afro-funk, to shimmying along to Syrian wedding singers, here are the most essential acts to catch this summer.

The Syrian wedding singer with over 500 albums to his name has become an improbable cult star in Europe thanks to his synapse-shredding Arabic dabke tunes. Brace yourself: some of his songs can last up to an hour.

Where? Expedition Festival in the Netherlands

In 2012, Islamist jihadists banned all music in northern Mali. Even playing music on your phone could result in a public whipping. Determined to keep their music alive, a group of friends formed Songhoy Blues, whose critically-revered ‘desert R&B’ is set to liven up a number of festivals this summer.

She didn’t record her debut album until she was 73, but this Brazilian diva – who spent her life working as a history professor and singing to river dolphins in her Amazon hometown – is making up for lost time by bringing her carimbó-influenced ballads to Gilles Peterson’s Worldwide Festival.

Expect intoxicating afrobeat electro-funk from this eight-piece British-Nigerian outfit, whose frontwoman Eno Williams has been known to perform with a stuffed bird on her shoulder.

There’s a bit of a buzz surrounding this Estonian fiddler, thanks to her eerie blend of Baltic folk and a motorik beat. Her spine-chilling songs about dancing devils and nightmares have a David Lynch quality and probably shouldn’t be experienced in a spooky forest setting, unless you fancy scaring yourself senseless.

This young Zimbabwean six-piece combo have garnered all manner of ‘Sub-Saharan Africa’s hottest new band’ plaudits. They started off busking for tourists near their Victoria Falls home, and now bring their Tonga-language music to bigger audiences.

Where? Open Eye in Switzerland

Blending Middle Eastern folk with jazz and Judeo-Spanish songs, the Israeli double-bassist brings his daydreamy shtick to a host of al fresco events.

The 80-year-old samba superstar performed to billions at last year’s Rio Olympics opening ceremony, but her colourful wigs and finger-clicking conceal a tragic past. She grew up in the tough Rio favelas, was widowed with five children by the age of 21, while her mother was killed in a car accident by her drink-driving footballer husband Garrincha. Yet, she’s still churned out six decades worth of scintillating music.

Her last album Woman At The End of the World touched upon gritty social issues (domestic violence, crack-addicted transsexuals), with her live set fusing postpunk guitars and bossa rhythms, topped off with that husky diva voice.

Where? Roskilde in Denmark

Balkan gypsy brass band who developed their style by performing at weddings. The focal-point of their festival calendar is July’s Electric Castle, set in the grounds of a 16th-century castle in their native Romania. Their blitzkrieg of brass might be too much on a hangover though…

The son of Fela Kuti (afrobeat pioneer and famed polygamist – he had over two dozen wives at one point), Seun drew a mammoth crowd for his 2014 Glastonbury performance. The highlight of his summer itinerary? A joint performance at Womad with vibes legend Roy Ayers (who toured with Fela in 1979) and Egypt 80 (his father’s former band).

Hypnotic Sudanese groove-pop from clever NYC-based singer, who’s got a background in ethnomusicology.

If Despacito has whetted your reggaeton appetite, try sampling this recently-gone-solo Puerto Rican rapper, founder of the seminal Calle 13.

Where? Roskilde, Weekend Beach in Malaga

Looking to get a festival party started? The cheery ‘psychedelic cumbia’ of this Colombian troupe has picked up fans such as Will Smith (he recently came out of musical retirement to rap on one of their remixes).

The drummer who provided the rhythmic backbone for Fela Kuti’s blistering sound in the 1970s has collaborated with Damon Albarn and Flea from Red Hot Chili Peppers in recent years. Now in his late 70s, Allen, who in his prime could pound the skins for six hours, shows equal resilience today.

Where? Dekmantel in the Netherlands

With war decimating their homeland, a cluster of Syrian musicians play this year’s Womad festival. The Orchestra of Syrian Musicians are previous Glastonbury openers and have recorded with Damon Albarn’s Africa Express (him, again!), while there’s also kanun (it’s a bit like a zither) player Maya Youssef and the mesmerising Whirling Dervishes of Damascus, who are so spinny they could induce migraines.

The Malian singer is a UN ambassador, has a Chinese car named after her and is an ardent campaigner for women’s rights in her homeland. The ‘songbird of Wassoulou’ also has a spectacularly sonorous voice set to enchant festival sites.

Where? Womad, Øyafestivalen in Norway

Dozens of albinos have been murdered in Tanzania in the last couple of decades, with many killed for their body parts, which are used by witch doctors in black magic rituals. This 18-strong collective (ranging in age from 24 to 57) will make its festival debut at Womad. It also marks the first time many of them have left Tanzania.

The Belgium-based Congolese rapper blends the soukous of his homeland with hip-hop and soul. He’s also the best dressed man on this year’s festival circuit thanks to his signature sapeur look (think bow-ties, bowler hats and cerise tailored suits). Expect that dandy-fied look to last around five minutes in the muddy climes of a European festival.

Stentorian Afro-Cuban singer whose live shows are peppered with rousing blasts of scat improvisation, rumba inflections and chants inspired by her Santería faith.

This French chanteuse scored a number one in her homeland last year with ‘Come’. Having spent her childhood traipsing across the globe, album Zanaka is a winning mélange of Congolese rumba, Middle Eastern rhythms and Euro electropop.

22. Janka Nabay and the Bubu Gang

A big star in Sierra Leone during the 1990s, the civil war saw him end up working in a fried chicken restaurant in the US. With his career rekindled by David Byrne’s Luaka Bop label, Nabay takes his synth-led take on traditional bubu music to a host of European festivals.

Where? Roskilde, OFF in Poland

Breathtaking Cuban pianist whose last album ABUC (that’s ‘Cuba’ backwards, get it?) swerves from big-band to Latino rap to duets with his mother.

These Senegalese legends might have been going since the 1970s but their heady stew of African and Latin influences still sounds as fresh as ever.

Where? Down the Rabbit Hole in Netherlands, Womad

Africa’s most famous vocal singing group have recorded with everybody from Paul Simon (they did many of the haunting harmonies on Graceland) to David Guetta. Having scored a hit single soundtracking a baked beans advert in the 1990s, they’re popular in the UK and Ireland, where they tour this summer.

Where? Supersonic in Birmingham

The blind Malian duo are superstars on the world music scene ever since they teamed up with Manu Chao for their European breakthrough Dimanche à Bamako in 2004. There’s a reason why the likes of Coldplay and U2 have hired them as support acts – the pair are a cracking live proposition.

Where? End of the Road in Salisbury, Pyrène Festival

The mystical dub reggae superstar who produced Bob Marley, and has worked with The Clash and Beastie Boys, turned 81 recently and is still as reassuringly eccentric as ever – he genuinely believes his studio is a spaceship where he receives music from fellow aliens.

Where? Beat-Herder in Lancashire, England

This band of Mexican musicians reworking the Morrissey/Smiths canon in a mariachi/cumbia style were seemingly made for festivals. Heaven knows they’re mariachi now?