So, in a bizarre turn of events, Google has sort of turned into TripAdvisor. How so? Well, you can literally start reviewing whole continents on the search engine now. And as you can imagine, the results are pretty hilarious. A one star review for North America because its name lacks originality? Oh, the internet…

Since the smartphone hit stores years ago, apps like Google Maps have completely revolutionised the way people travel. As long as you’ve paid your mobile bill, the internet can get you from A to B like nobody’s business. Bars, clubs, hotels, restaurants – you name it, it’s been mapped. But what happens when you say goodbye hyperlocal and hello massive continent? Hilarious reviews of whole continents, that’s what. And yes, that means you can literally review the 17.2 million squares miles of Asia, even if you’ve never been. Dangereux.

Here are some of the most entertaining reviews of all seven continents that will leave you in stitches. 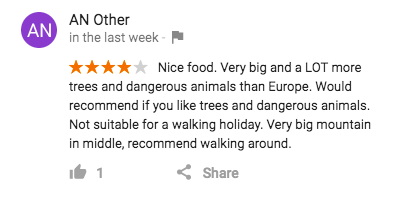 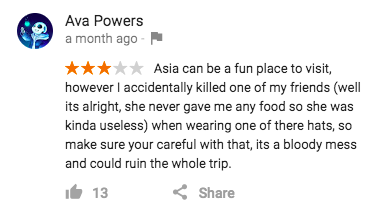 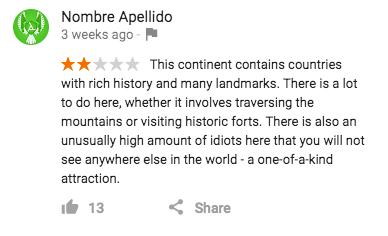 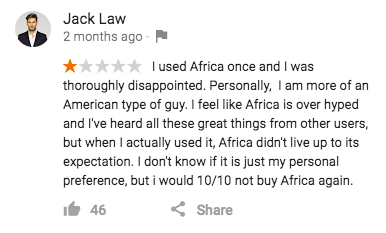 It was too far away from where I live and the people there didn’t speak English. Well they did, but not all the time. Also the food was good but there weren’t any hot dogs. Only go if you’re prepared to spend a lot of money and smell like smoke. (2 stars)

Scarlett S. noted that Oceania is home ‘to many an animal that can kill you’ – she even went on to say that it was quite ‘bitey’. And if you think Antarctica escaped a mention, you’re wrong (this is the world of the internet after all). Harvey W described the rocky ice continent as a ‘bit nippy’.

Oh the joys of humanity.

Want more laughs? These maps show Europe according to Europeans!