Slavs and Tatars: Politics, Aesthetics and Friendship in Eurasia

The enigmatic and charismatic art collective Slavs and Tatars push the boundaries of language, culture, space and time. Their charismatic work, which dives deep into the soul of Central Asia and Caucasus, is like a comparative study of all that connects and separates the countries in the region. Spanning installation, books and mixed media, their work surpasses the aesthetic and fascinates with its multifaceted approach to heritage. 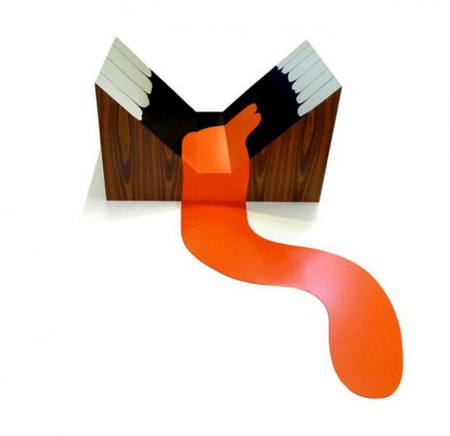 Their exhibition list reads like a patchwork mosaic of geographical paradox: Russia, Poland, Georgia and Serbia stand side-by-side with such giants as Paris, London, New York. There is no single, preferred destination, there is no stability or domestic cosiness: the work of Slavs and Tatars crosses the world in its entirety, drawing thick lines on the East-West map. 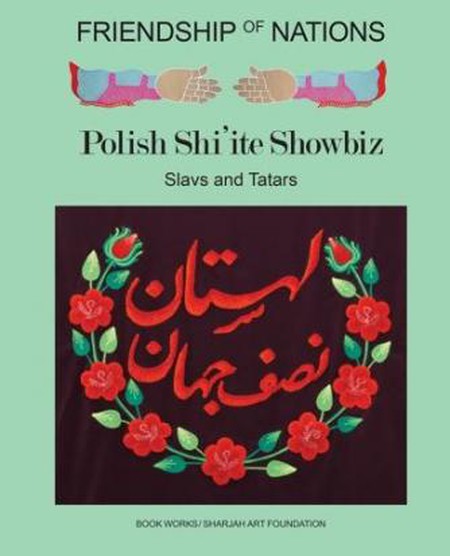 The art collective is a somewhat secretive entity. To the public, they describe themselves as ‘a faction of polemics and intimacies devoted to an area east of the former Berlin Wall and west of the Great Wall of China known as Eurasia’, which says it all and explains nothing. But that’s just it: the ambiguity of their self-perception, and the anonymity of its artists, allows Slavs and Tatars to forego the bonds of medium, style and matter in their systematic dive-and-reveal approach to the cultural wholeness, complexity and nuance in the greater region of Central Asia and Caucasus.

And they do this in the most comprehensive, awe-inspiring way possible. Hymns of No Resistance, their 2009 performance at the Kaai Theatre in Brussels, was a reinterpretation of the popular from the perspective of the pressing: She’s a Maniac turns into She’s Armenian under the notes of a Kurdish music ensemble, and a political polemic rushes through the lyrics, accompanied by the light-hearted tune of Western pop songs. Beyonsense, staged at the MoMA NY in 2012, rose as an exploration of the mystical and the ambiguous, inspired by the Russian word zaum, but travelling across a number of languages and cultures via text, oriental carpets and sense-bombarding installations. Friendship of Nations: Polish Shi’ite Showbiz conjured up, as if by a very real magic, a universe of craft and poetry, vibrant embroidery, banners and books, that examined and created links between Poland and Iran, the space between the Iran Revolution and Poland’s Solidarnosc movement, two defining moments separated by just one year. The show travelled from Sharjah to Gent, Gdansk, Prague and LA.

These are just a few select examples. What all these projects show, both individually and as a collective accomplishment, is a profound common foundation, often scarred by cultural misinterpretation, which runs through the region of Central Asia to the Caucasus, from Poland all the way to the eastern tip of Kazakhstan. But even this seems too limiting a description, as Slavs and Tatars’ projects have previously dealt with the USA’s perception of Iran, and frequently focus on linguistic diasporas, and how language travels across the world.

Space is their domain, as is time: in spirit, the collective’s working Zeitgeist spans millennia as they dig up the past and translate it into the modern context, or indeed bring the modern to related, past incarnations.

But they actually started in 2006, as a reading group for a small circle of friends and acquaintances. Having spent much of their infancy trawling through dusty tomes and translating them in all their obscurity, Slavs and Tatars are still influenced by these first book-based projects. This shines through many aspects of their work, such as reopening lost archives, or language, linguistics and the metamorphosis of communication. But, perhaps because of their roots in literature, they are first and foremost storytellers, explaining in an interview that ‘our job is to tell stories through other stories’.

One of these re-told stories is their most successful publication so far, Molla Nasreddin: The Magazine that Would’ve, Could’ve, Should’ve, Slavs and Tatars explored the Molla Nasreddin, an early 20th century Azeri periodical that was written in Azeri Turkish, rather than Russian – a risky move, considering the Russian occupation of the region – and that satirised the region’s political and social realities. Republishing the magazine was a risky move for Slavs and Tatars as well, but they pulled it off with flair and grace, and that sense of humour and playfulness that is so strongly instilled at the core of their presentation. Although the publication presents an object of the past, this object is in no way reinvented, because it is not anachronistic; it is an object whose boldness makes it contemporary, but also unacceptable in contemporary terms. These tensions are all brought to the fore in the beautiful colour book, complete with illustrations and captions. 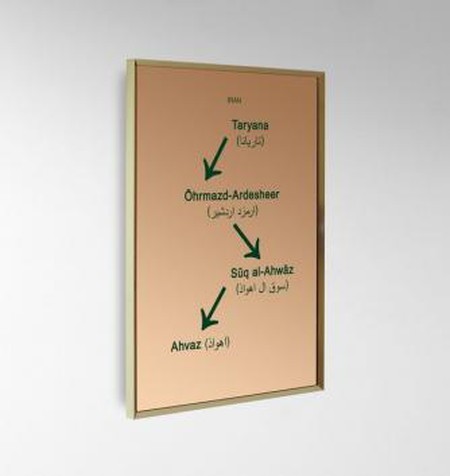 Slavs and Tatars, Love Me, Love Me Not (Iran Ahvaz), 2014, copper mirror, reverse-glass acrylic paint, 85x60cm | © Image courtesy of The Third Line and the artists

Molla Nasreddin: The Magazine that Would’ve, Could’ve, Should’ve is a good indicator of how Slavs and Tatars interact with language and literature. Their work sprints in a direction opposite to art for art’s sake: ‘we are not interested in art as an end in itself,’ they say. ‘It has to speak to the larger issues facing us.’ The language and the stories are employed for a purpose that is at the same time political and polemical, tangible and mystical.

At Language Arts, their first solo show in the Middle East, hosted by The Third Line, Slavs and Tatars lay out their language-based work in a supreme showcase of parody, insightful critique, abstraction and cross-linguistic celebration. A copper mirror shows the evolution of an Arabic word; a linen banner presents the three-way superposed transliteration of a phrase, in Polish, Russian and Arabic; characters from various alphabets are fixed together, and apart, in surprising scenarios. All in all, the works presented at the exhibition point out the idiosyncrasies of language, its role as the point of reference for religion and society, as well as confounded – and defined – identities that language gives rise to. 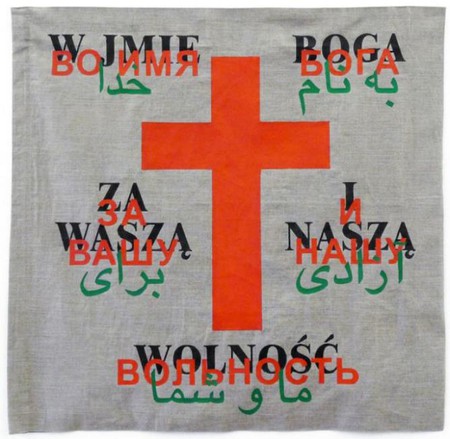 Just a few blocks away from The Third Line, ArtDubai is also preoccupied with the work of the collective. This year’s Marker series will focus on art from the Caucasus and Central Asia, which Slavs and Tatars have been invited to curate, bringing to Dubai five galleries from Azerbaijan, Georgia, Kazakhstan, Kyrgyzstan and Russia. The fruit of these artistic collaborations consists of a series of paintings, a ‘regime of portraiture’ as ArtDubai calls it, that traces decades of figuration and configuration by artists from the five Central Asian countries. The whole project bears the form of a chaikhaneh, a ‘Eurasian tea salon’ that offers room for dialogue and meditation in the frenzied setting of an international art fair. Though the entire set-up is groundbreaking in a number of ways, an important aspect is the promotion of art from countries such as Kyrgyzstan or Azerbaijan, where the art and culture infrastructure is failing, or too weak to allow artists to flourish.

And this process of discovery and flourishing is what sets Slavs and Tatars apart: they breathe life into objects, cultural ties and nuances that might have vanished otherwise, and they do it with just the right amount of humour and imagination. 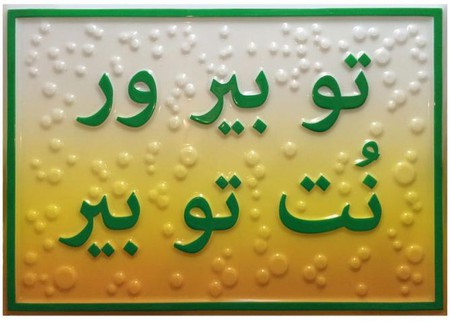 Slavs and Tatars, To Beer Or Not To Beer, 2014, Vacuum formed plastic and Acrylic Paint, 64 x 91 cm | © Image courtesy of The Third Line and the artists