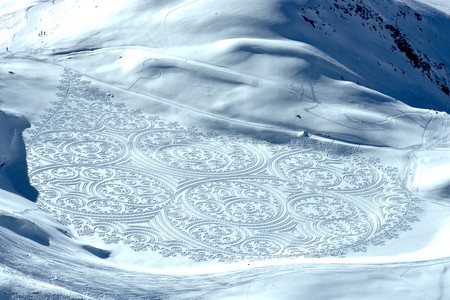 More than a decade ago, British map-maker Simon Beck began creating large-scale geometric patterns on the Alps’ pristine pistes. Each mathematically symmetrical artwork is carefully plotted on paper, then executed over the course of 12 hours and 20 miles, as Beck physically sketches and shades the piece using his own footsteps. The next day, thanks to the elements or human interference, his work will be wiped away. We caught up with the world’s most famous snow artist to find out more about the physical and metal feats required to create such visually mesmerizing work.

Esme Benjamin: Your art reminds me of a mandala — the symbol from Indian religions, representing the universe. What inspired you to create these geometric patterns?

Simon Beck: All the early sketches were of the type I used to draw as a child. These are kind of engraved in my psyche. The points of a regular polygon are plotted, linked with straight lines which divide the interior of the polygon into segments, and are then shaded alternately.

It took a while for me to realize I was onto a big thing and early drawings were chosen to minimize the time spent on the measuring process (because it’s boring and all too similar to my other job, map-making). But as I progressed and wanted to make drawings I hadn’t made before, they became more complex. 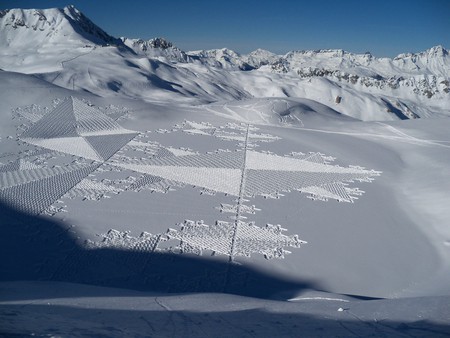 EB: How do you take your creations from page to snow drift with such accuracy?

SB: The key is to take great care during the first stage, which is the accurate measuring. This is done using (as necessary) a prismatic compass, and a rope or pace counting for distance measurement. I have transferred skills from my map-making experience, a method of working that prevents small errors adding up to a noticeably degraded end result. 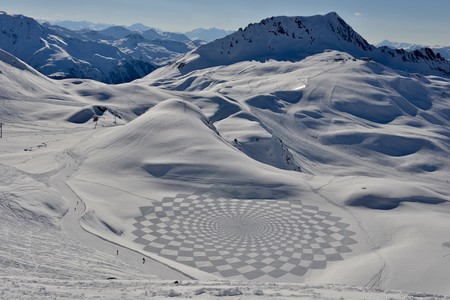 EB: Walking on snow or sand is hard enough, but you’re running in the stuff — sometimes a marathon’s distance. Do you do any sort of fitness training to prepare, or is creating the art your main form of exercise?

SB: There has been some exaggeration [in the press] here. I doubt whether I have exceeded 20 miles (0.8 marathons) in one day; moving at an average speed of 2mph during 10 hours out of a 12 hour period would be a fair estimate. Not much running either. A certain amount of jogging at times, but I am not superman!
To answer the question, I like hiking in the mountains during the summer, and jogging in the Quantock Hills when I am living with my parents in Southern England. During the winter the drawing is my main exercise. 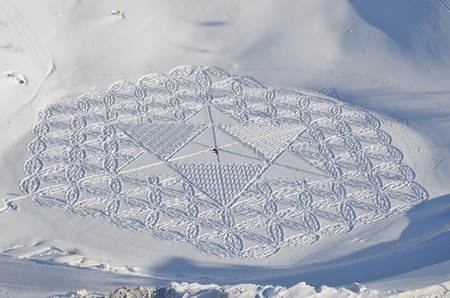 EB: The pieces can take you an entire day to create. How do you keep your energy up?

SB: I start the day with a huge plate of porridge with some bananas at the same time, which keeps me going for about five hours (which includes the measuring stage, about two hours), then I drink sweet fluids and eat chocolate biscuits when I feel hungry. 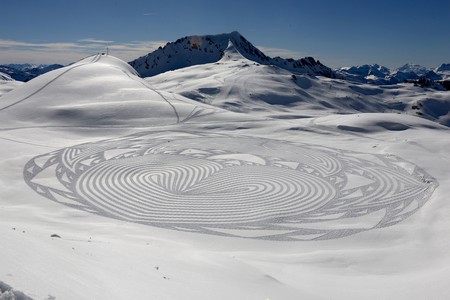 EB: Many creative people talk about flow — the meditative experience of being so immersed in an activity that you lose track of time. How do you feel when you create your work?

SB: The first two stages (measuring and drawing lines) are careful procedures that require focus and concentration, just like any other technical job. Mistakes cannot be undone but sometimes an error is simply ignored. Other times the drawing has to be modified as a result. After that I can listen to music and relax for the final stage, which is the shading and the re-walking of the lines (the shading can spread snow and some of the lines have to be re-walked). 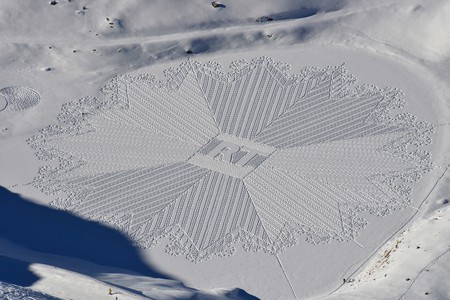 The shading is the part I enjoy, as I can relax and listen to nice music, and this is when the drawing takes shape. Usually I start at the edge and work towards the centre as the largest areas to shade are usually round the edge and it is psychologically easier to get these done first.

Usually it gets dark shortly after the shading starts, so work carries on with a head lamp. About two hours after nightfall the piste basher will come round and light up the drawing and I see the half completed result for the first time, which is a very rewarding moment. 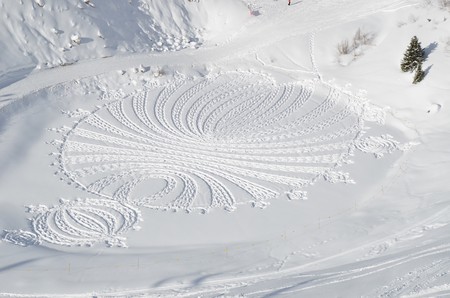 EB: Your pieces are all created in and from nature, and are essentially impermanent. How do you feel about that?

SB: The important thing is to get the photos. I plan drawing for the day before one that is forecast to be sunny. Once I have the pictures, the best thing is another big dump of snow so I can make a new drawing.

What is rather sad is when there are weeks of dry weather, and the drawing gradually fades and gets tracked and starts to look like a bit of graffiti. But the worst is when it gets tracked before the photos are taken, or when the expected sunny day turns out to be cloudy — not being able to get photos is the most common reason for a failed drawing, although it still serves as a rehearsal for the second attempt.

With sand drawings the incoming tide will usually start to wash away the drawing within minutes of taking the photos. 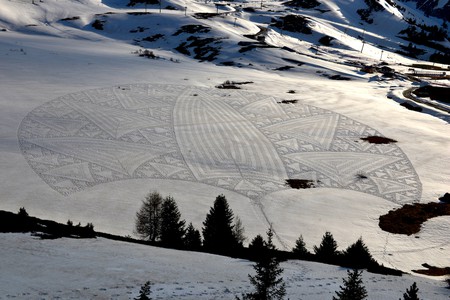 Snow art by Simon Beck
Give us feedback