See the Mediterranean Through the Eyes of an Explorer 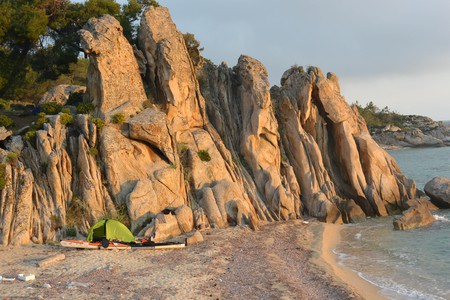 When Australian explorer Huw Kingston kissed his family goodbye in New South Wales, it would be the last time he’d see them for a year, 363 days to be precise. Kingston was about to embark on the challenge of a lifetime, one which would push his body to its limits on a pan-Mediterranean journey using manpower alone. 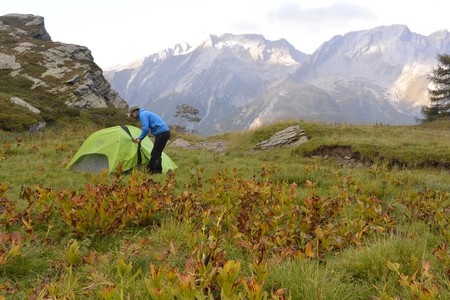 Over the next 12 months Kingston hiked, rowed, cycled and kayaked 15,000km through 17 countries, a feat which would earn him the Australian Geographic Society’s Spirit of Adventure Award. His efforts also raised AUD$100,000 for Save The Children Australia, making him the charity’s largest individual fundraiser. 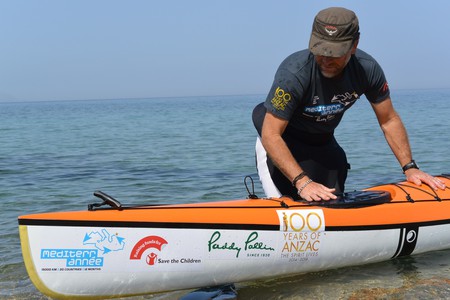 Huw’s new book Mediterranean – A Year Around a Calm and Troubled Sea is the story of this once-in-a-lifetime adventure. It’s a tale of troublesome officials, debilitating parasites and lucky escapes, but also an ode to the wonders of the Mediterranean and its people. Culture Trip caught up with the explorer to find out more about his incredible journey and how to plan the perfect voyage. 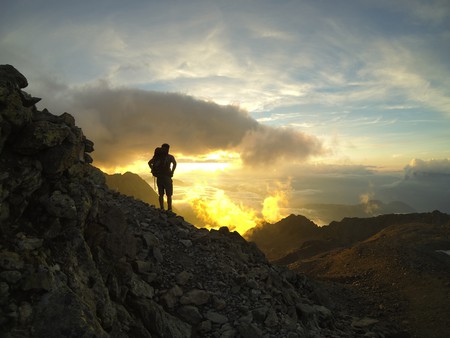 Culture Trip: Family clearly means a lot to you. What do they make of your adventures and how hard was it being away from them for so long?

Huw Kingston: My beautiful wife Wendy has supported me over many long journeys of three to four months – but this, a whole year, was guaranteed to be so much harder. Paradoxically, and perhaps in a selfish way, the love we have gives me the strength to complete such journeys. I was also leaving behind five gorgeous grandkids too, all under 10 at the time. It was hard to not see them for over a year, to not watch them change and grow.
The realisation that this journey was my choice, my dream, not something forced upon families split by closed borders, conflicts or tragedies, made the separation a little easier. I also probably shouldn’t have left my wife in the middle of massive renovations to our house! 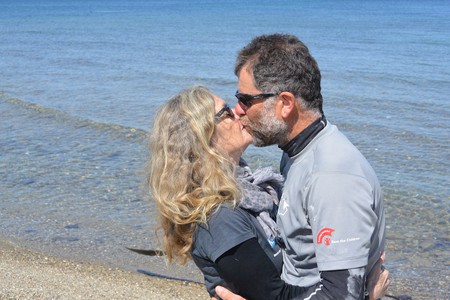 CT: When you go on these amazing expeditions are you trying to prove something to yourself, your family, the world? Do you feel that even after all this you still have things to prove?
HK: I like that question! Perhaps because the answer is not simple. When I was younger I think I wanted to push myself and try to understand what I wanted to do with a seemingly endless horizon of life ahead. Now, older, there is a new fear – a fear as to whether my creaking and abused joints could still propel me around for long periods without squealing ‘stop’.

In my mid-twenties, after being told by orthopaedic specialists to give up outdoor activities due to spinal issues, I made the decision to ignore their advice. It was the best decision I ever made. I remember that conscious decision to keep going until I could no longer. The ‘no longer’ has always hung over me; scared me, propelled me to get to the start line when my back would be in agony. I needed to prove I could bury the problem once I began a long journey. 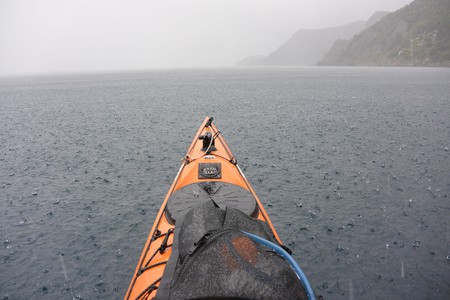 CT: The sea plays such an important role in the book, both practically and metaphorically. What was it like spending so much time on the water?

HK: The sea scares me and I have never felt really at one with it. Although I feel tiny in the mountains I’m comfortable when the weather closes in, indeed often even more comfortable. But on the sea I am always on edge; always wondering when it will get up to challenge me.

I wouldn’t necessarily say I was fascinated by the sea other than the fascination that came from choosing to make the Mediterranean my roadway and my home for a year. It was natural that it would dominate my journey for it was the glue that held my year together. Of course it was as much about the people and places along its shores as the water itself. 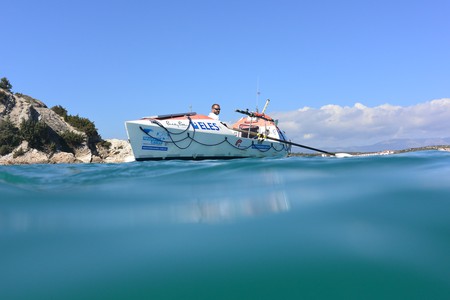 CT: What were some of the big challenges you faced on this journey? Were there ever times when you thought you wouldn’t finish?

HK: Arrests by the Turkish navy, fights in Tunisia, knee problems in Croatia, geopolitics in Gibraltar and so much more challenged me along the way. When I started planning my journey in 2012, there was some optimism that the Arab Spring might make it easier to travel through countries such as Libya and Syria. The reality of course is that things became much, much worse.

The weather always threw up its challenges right to the end. After Marin (a Slovenian adventurer who sometimes travelled with Huw) and I somehow outran a winter storm to land on the Greek Peloponnese we were pinned down for weeks and I saw my goal of completing the journey in one year ebb away. That led to a very difficult decision for me that you will read about in the book. Right to the end bad weather and bureaucracy had me on tenterhooks as to whether I would get to Gallipoli and, even if I did, if I would be allowed to land. 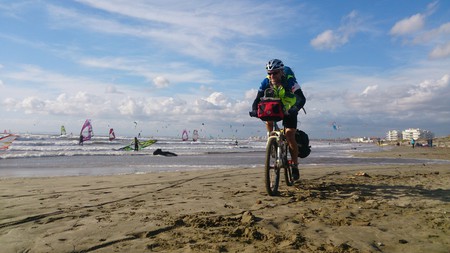 CT: Were you surprised by any destinations in particular?

HK: Albania had, for over 40 years until 1992, closed its borders. Ruled with an iron fist by Enver Hoxha, it slowly retreated from the world, alienating firstly its Russian allies then its Chinese friends. The country neither welcomed nor sought contact with the outside world.

Now the country is open again, visitors are welcome and the economy is finding its way on the international stage after some desperate teething troubles. It wasn’t that my 10 days kayaking Albania’s coastline so much surprised me because I really didn’t know what to expect from the country. However I did find an immensely hospitable country with fine food, great coffee and some of the biggest sea caves I’d ever kayaked inside. 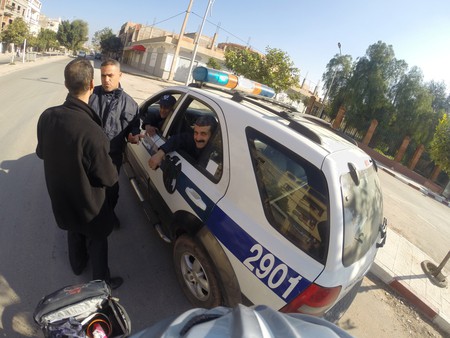 CT: This journey had the added significance of the Anzac Centenary, raising money for charity and environmental awareness. Do you feel like you accomplished what you intended to?

HK: What really gave my idea of a Mediterranean circumnavigation the catalyst it needed was the realisation that the Anzac Centenary was occurring on 25th April 2015, a huge day for Australia. So a commemoration of the horrors of that terrible war played a part in my journey, and being at Gallipoli to start and finish was a powerful experience.

It was the impact of war and conflict on the most innocent of victims – children, that had me wanting to do something for them. In Save the Children I got to work with a wonderful charity and we agreed that my fundraising should be specifically for children affected by the Syrian crisis, children of one of the 22 countries that share a border with the Mediterranean Sea. 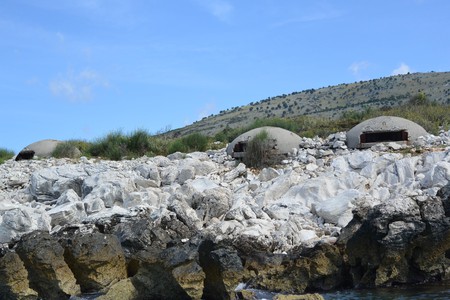 I don’t think anyone who has seen beautiful places and arrived at them under their own steam, can fail to be concerned by what is going on in this world. Humanity seems almost too adaptable, so that as the planet collapses around us, the rivers choke and die and the rubbish piles up around us, we just get on as if all is normal. This is despite the fact that to a very large extent the solution is in our individual hands.

In the Mediterranean Sea, it is utterly out of control and the plastic bottle is the number one culprit. I didn’t actually set out on that particular journey to raise environmental awareness of this or any other problem but just seeing it day after day reaffirmed my commitment to reduce plastic usage. 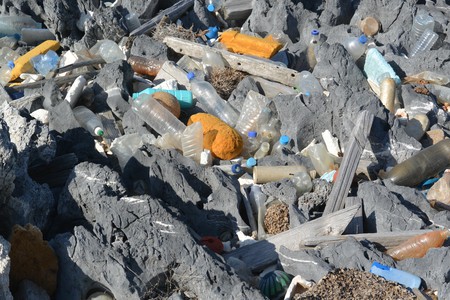 CT: Something I always ask any explorer I meet. What are your top five tips for planning the perfect voyage?

HK: Perfect has connotations of everything going according to plan. A successful journey has you reach your destination after overcoming some challenges and curve balls along the way. But some tips for planning a long journey:

– Get yourself to the start line and begin. Everything else will flow from there.

– Set your goal but don’t be blinkered to other options as you go along.

– Take the best equipment you can afford but don’t take too much of it.

– Accept that things will go wrong but that when they do even better options may well present themselves or offer an even better adventure.

– Get yourself to the start line and begin. Everything else will flow from there… 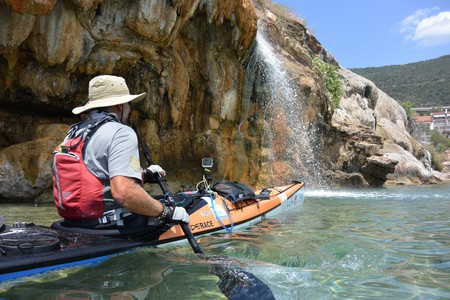 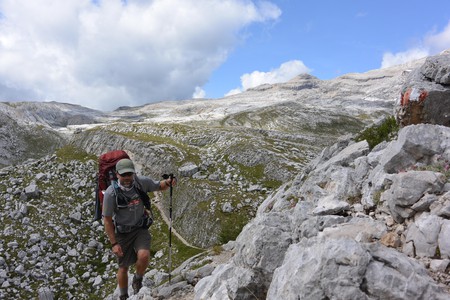 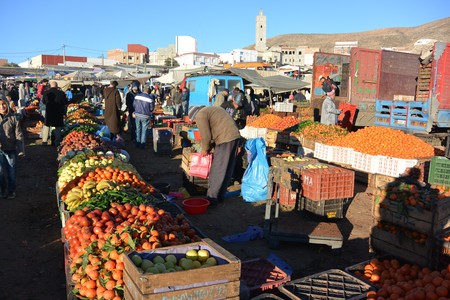 Huw Kingston’s book Mediterranean – a year around a charmed and troubled sea is available from www.whittlespublishing.com/Mediterranean. Huw will be in Europe this May/June doing a series of talks, including around regional UK with the Royal Geographical Society. Details can be found here.