Kitsch-Fest or Nation-Building Tool: What Does Eurovision Mean for Eastern Europe? 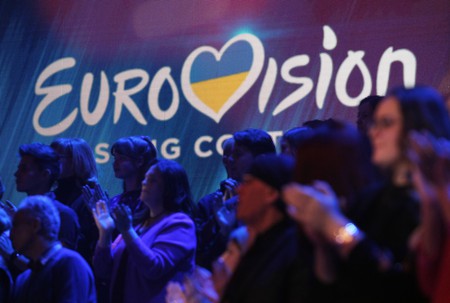 Love it or loathe it, Eurovision will shortly be back on our screens. With politics and issues about identity often taking centre stage, the song contest is about far more than sequins and key changes, and this is never truer than when we’re talking about post-socialist Eastern Europe.

Ukraine’s withdrawal from this year’s Eurovision Song Contest – in part over its representative, Maruv, performing in Russia – serves as a timely reminder that, when it comes to Eastern Europe, the show has as much to say about geopolitics, identity and cultural diplomacy as it does music. 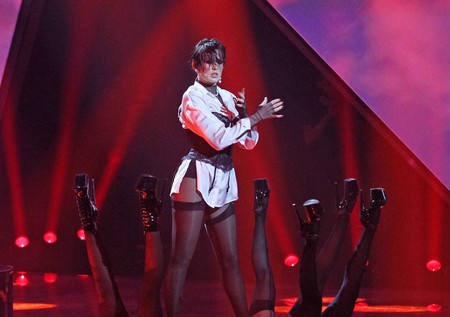 “Most people say they don’t even watch the show,” say Zala and Gašper, who will represent Slovenia in this year’s contest, “yet everyone is talking about it”.

The young, XX-esque duo will present their indie-electro track ‘Sebi’ (‘Oneself’) at Eurovision in Tel Aviv on 14 May (and again on 18 May, if they make it to the Grand Final). Their lo-fi vibe is not what most people have come to expect from Eurovision, which is known, particularly in Western Europe, as an annual kitsch-fest. With lyrics about being true to yourself, Zala and Gašper’s chilled, low-key song is hardly controversial. But its message of self-affirmation, sung in Slovene, speaks to Eurovision’s often overlooked significance as a platform for image-building and the symbolic construction of the nation in the eyes of a global audience.

In terms of its format, Eurovision is nearly unique. In no other contest do nations, represented by a singing ambassador, perform for each other or judge each other. Through voting, kinship, tension or aggression can be expressed. Despite the wholesome, inclusive Eurovision themes of recent years – Dare to Dream (2019), All Aboard (2018), Celebrate Diversity (2017) – the phenomenon of ‘loyal voting’ and its antithesis (a pointed lack of votes) do little to strengthen a sense of European unity. This phenomenon is particularly marked in the context of post-socialist Eastern Europe. The long-time UK commentator the late Sir Terry Wogan was known for his quick-witted interjections during the voting process, casting Moscow’s enduring power as the key to Eastern European voting patterns. “Ukraine wants to be absolutely sure that the electricity and the oil flow through,” Wogan quipped as Ukraine handed Russia 12 points in the 2008 contest. In 2013, Azerbaijan’s failure to give Russia any points caused a diplomatic incident, with Russian Foreign Minister Sergei Lavrov even weighing in and demanding an explanation for this apparent snub. 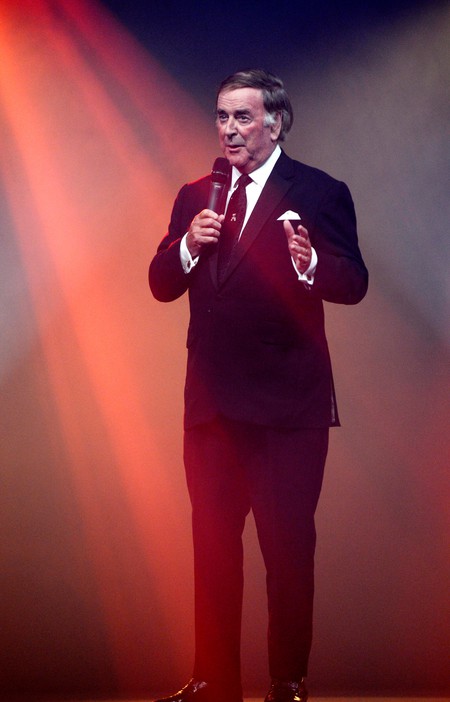 Paranoia on Russia’s part is perhaps understandable when we bear in mind the disqualified 2009 Georgian entry ‘We Don’t Wanna Put In’ – a less-than-subtle swipe at Russian President Vladimir Putin – and Ukrainian drag queen Verka Serduchka’s 2007 entry ‘Dancing Lasha Tumbai’, which sparked controversy by virtue of its remarkable phonetic resemblance to the words ‘Russia goodbye’. Coincidental or not, these instances raise the question of how the young, independent states of the former Eastern Bloc should seek to present themselves on the Eurovision stage in relation to their neighbours and former compatriots. 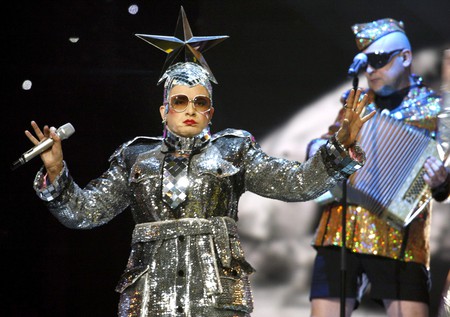 Strategies range from blatant patriotism – as in the understated 2011 Belarusian anthem ‘I Love Belarus’ – to the use of national languages and narratives about national identity. At the more subtle end of the scale, consider Belarus’s young 2017 entrants Naviband, who brought the Belarusian language to Eurovision for the first time in the contest’s history and describe the sensation of singing in their own language as offering “strength and emotional lift”.

While it is common for artists to sing in a language other than their national tongue (notably in English), this linguistic first is particularly salient given the repression of Belarusian under Soviet rule. The arrival of Belarusian onto the Eurovision stage is indicative of a wider trend; once the purview of villagers and the political opposition, Belarusian is no longer on the back foot. 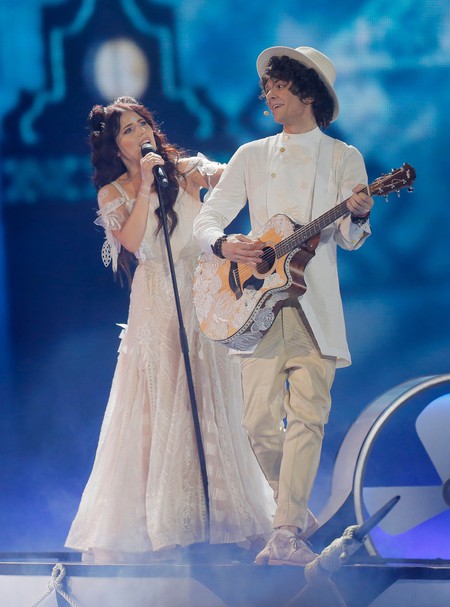 Then we have the singing grandmas. Winning second place for their catchy disco track ‘Party for Everybody’, Russia’s 2012 representatives Buranovskiye Babushki conformed to the visual stereotype of Russian babushki or ‘old women’ (notwithstanding the fact that they actually sang in the regional Udmurt language, not Russian) and stand accused by Eurovision academics Karen Fricker and Milija Gluhović of “exploiting a ‘folk’ vision of Russianness familiar to the Western gaze”. Similarly, Ukraine’s winning 2004 performance by Ruslana played on the ancient Carpathian Hutsul culture, featuring the traditional trembita horn and drums, but performed under the banner of Ukraine and appeared to represent Ukraine as a whole. 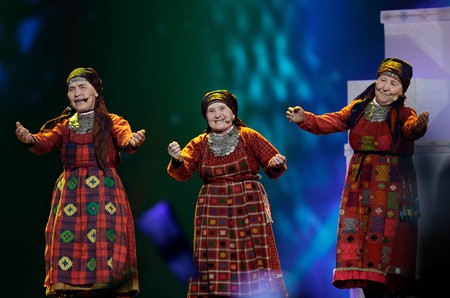 Another strategy is to cast the nation specifically in response to a shared regional heritage. We might note, for example, Poland’s 2014 entry ‘My Słowianie’ (‘We Are Slavs’) featuring dancers in traditional Polish costumes; Romania’s catchy 2009 track ‘The Balkan Girls’ (who allegedly “like to party like nobody”); and Serbia’s 2010 contribution ‘Ovo Je Balkan’ (‘This Is the Balkans’).

The 2016 Ukrainian winner Jamala’s song ‘1944’ takes Soviet history as its subject, referring directly to the forced deportation of Tatars from Crimea in that year by Joseph Stalin (Jamala is herself of Crimean Tatar descent, and sang part of the song in the Crimean Tatar language). While the lyrics did not touch on Ukrainian-Russian tensions surrounding Crimea, and were judged as not contravening Eurovision rules, the song sparked accusations of political subtext. When asked about her decision to sing ‘1944’, Jamala highlighted the significance of the song’s language and subject matter for Ukraine and for her personally. “I wanted to tell the story of my people and my family. Crimean Tatar is one of the languages spoken in Ukraine, and I’m happy it was heard all over the world.” 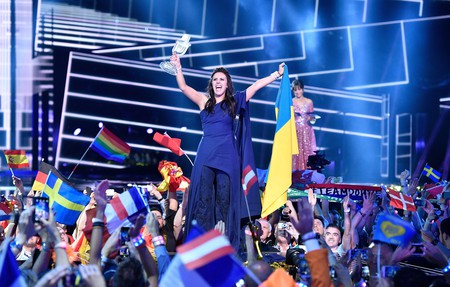 If a contestant’s three minutes of fame serve as a handy platform for national publicity, hosting the contest does this on steroids. When the Azerbaijani capital Baku had its moment in the spotlight in 2012, the authorities pulled out all the stops to host the most expensive Eurovision ever. With spending rising to more than €160 million, and the building of a state-of-the-art venue (the Crystal Hall) causing forcible evictions, being recognised in the eyes of the world as a modern, thriving state was obviously a top priority for the country’s government.

Alongside extravagant spending and attempts to clean up a city’s image in time for the cameras, strategic humour and a dose of self-reflexivity are a common approach. During the 2009 Eurovision Grand Final in Moscow, for example, the hosts of the show themselves made references to national stereotypes, presumably in an attempt to playfully dispel them. Within the first minute of arriving on stage in the final, the male host said to the audience, “They say Russia is very cold and that it’s always snowing. And that’s true, if you’ve learned all you know about Russia from James Bond movies. Well, take my word, right now it’s warm in Moscow and the sun is shining.” Quite how this was possible at 11pm is unclear, but the fact remains that the stereotype was verbalised in order to dismiss it. At other moments, stereotypes were mocked; one host stated that, “one of the most common mistakes about Russia is that bears can walk in our streets”, just as someone dressed in a bear costume lumbered past behind them.

When speaking with Culture Trip about his experience winning Eurovision in 2011, Eldar Gasimov (half of Azerbaijani duo Ell & Nikki) recounts a tremendous welcome upon returning to Baku. “The journey started with the airport… There were about 3,000 people. Then a wonderful reception at the presidential palace. I turned to Nikki and said, ‘We’re rock stars now.’ This whole year… was an unforgettable journey for our country. I still meet people who remember it and say they want to relive those moments again,” he says, looking back on the period following Azerbaijan’s victory. 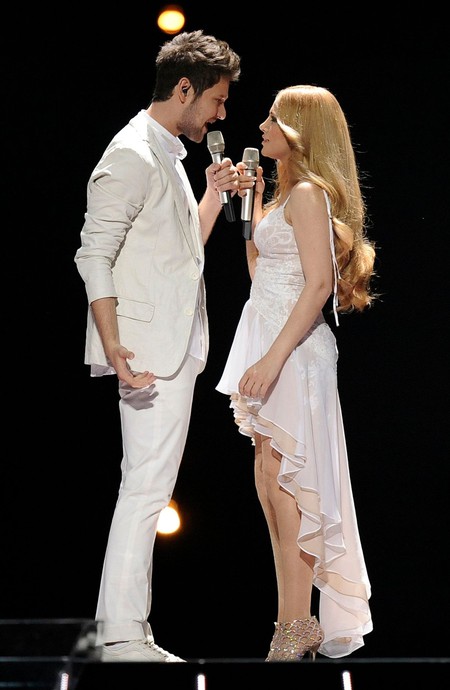 Without attempting to downplay the controversies surrounding Baku’s approach to hosting, Eldar’s words encapsulate the challenges inherent in representing a country whose culture was long subsumed under a broader label, and the pressure that comes with Eurovision. “Azerbaijan is… a country that has so much to tell and to show to the world. As the world’s biggest cultural event, Eurovision unites many cultures, mentalities and tastes, and is an amazing platform and opportunity to be heard.”