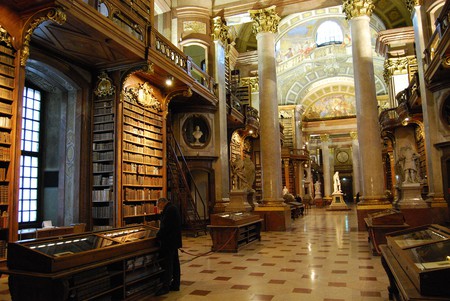 Looking for a place for contemplation and learning? We list 13 of the finest libraries and reading rooms in Europe, from baroque spaces to cutting-edge extensions from contemporary architects.

Located in the stunnning Mafra Palace, this exclusive library is only accessible via appointment. The magnificent tiled floor, made out of grey, rose and white marble, attracts Instagrammers far and wide. 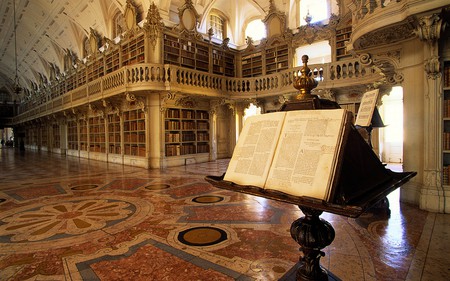 Deep inside All Souls College, Oxford you’ll come across beautiful dark green shelves and towering marble statues. This wonderful modern collection encompasses more than 185,000 books, a third of which were published before the 1800s! 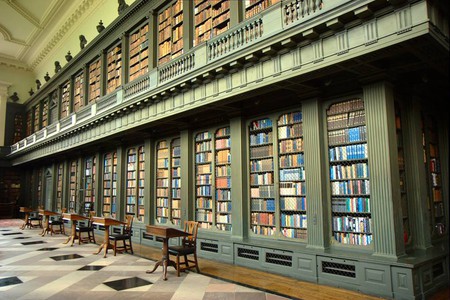 The great crystalline building stands a whopping nine-storeys high overlooking the German city of Stuttgart. Its very on trend cube white interior attracts tourists from all over the globe and has won several architectural awards. 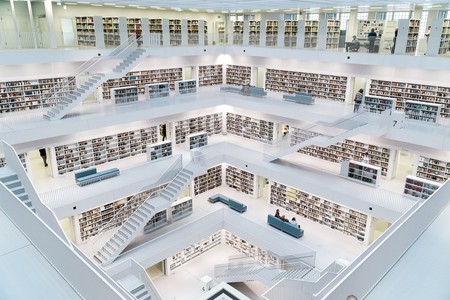 One of the largest monastic libraries in the world, the library at Admont Abbey is a masterpiece of the baroque. Its cavernous ceiling is decorated with frescoes showing the progression of human knowledge up to divine revelation, embodying the ideals of the Enlightenment and how they were structurally expressed. Expansive windows allow the sun to flood the room and make the visitor feel blessed with the light of wisdom. 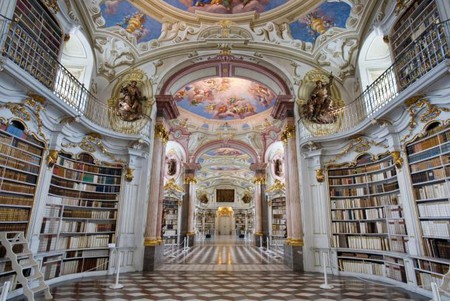 Named for Joao V, Portugal’s ‘Sun King’, the Old Library at Coimbra University exhibits the hallmarks of architecture made for an absolutist ruler. Joao dedicated much of his time to patronising the arts, and the library was built with the wealth that accompanied Portugal’s imperial endeavours. The library only houses books printed in the 19th century and earlier, making it a truly historical collection. 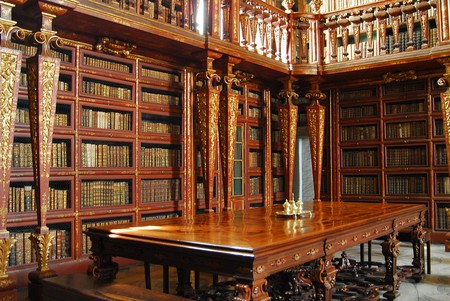 The highlight of this library is the ‘Long Room’, resembling the nave of a large church. The Long Room is punctuated by busts of great philosophers and figures associated with the university, including Aristotle and Edmund Burke. In October 2014, the library bought a significant collection of Samuel Beckett’s letters. 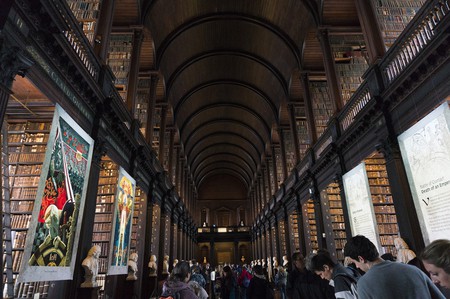 Long Room | © Kate. Get the picture/Flickr

The French National Library is made up of a handful of individual complexes which add up to an embarrassment of riches. A particular highlight is the François-Mitterand library, which was built by Dominique Perrault in 1989 following an international competition. Attempting to embody the very force of modernization, the Francois-Mitterand library asserts the dynamism of learning. 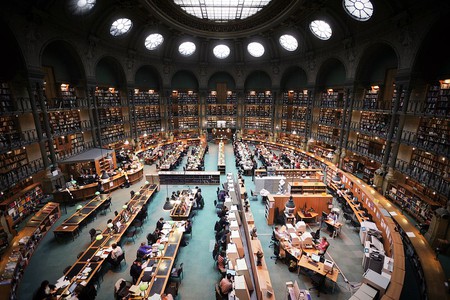 The Austrian National Library is housed in the Hofburg Palace, which was the historic seat of power for the Habsburg family. Decorated in an explosion of Baroque colour, the library is abundant in its decoration, with meters-tall bookshelves and luxurious ornaments. The walls are curvaceous, and the imposing statue of Holy Roman Emperor Charles VI looms large underneath the large ceiling fresco. 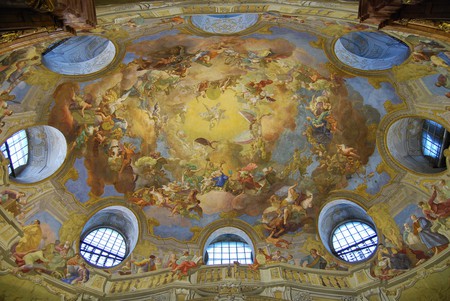 Andrea Palladio decreed that Jacopo Sansovino’s Biblioteca Marciana was the ‘richest and most ornate’ building assembled since antiquity. The obligatory ceiling frescoes and niche paintings are present, some of them painted by classical Venetian artists Titian and Tinteretto. You enter the library by walking up a dramatic marble staircase illuminated by golden decorations above – an appropriate entrance to one of Venice’s finest buildings.

The plaza outside of Biblioteca Marciana | © Benh LIEU SONG/Flickr

The Radcliffe Camera is set in Radcliffe Square, just off Oxford’s High Street. Most of the internal decoration is built with locally sourced stone, which provides the library with a deep echo and sense of space. The library is not permanently open to the public, but special tours run every Sunday and also include some of the other highlights of the Bodleian library complex. 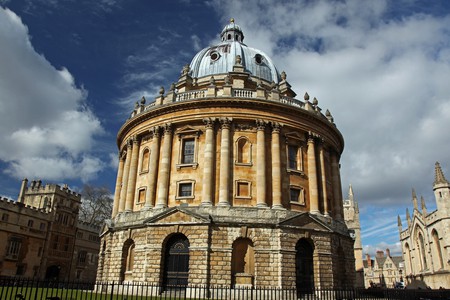 The interior of the Philological Library is impressive, as the design uses curves and clean white lines to give the entire building a kinetic feel, with the bookshelves and reader stations acting like interconnected neurons and axons. The brain metaphor is continued as the room is split into two hemispheres gradually narrowing in size until they reach the closing of the cupola. The building truly feels alive, as it possesses a double ‘skin’ shell on its walls that can close and open in response to Berlin’s varying climate. 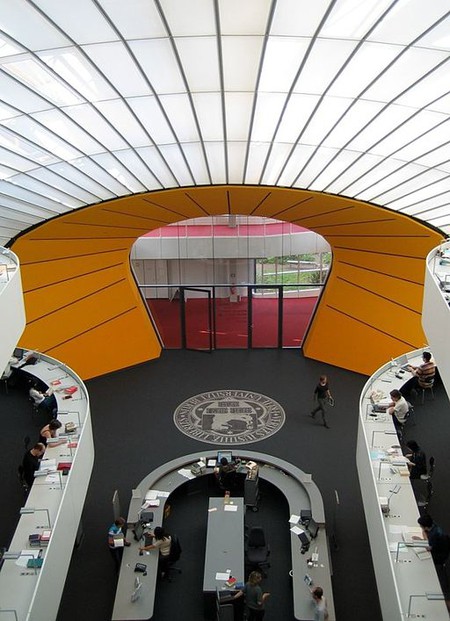 Interior of the Philological Library | © senhormario/Wikimedia

In the Clementinium complex of Prague is the Baroque Library Hall, one of the greatest examples of the titular architectural movement. Baroque takes its name from the Spanish word ‘barroco’, which means a rough or misshapen pearl. Unlike many other libraries, the Klementinium library is truly vivacious and celebrates the vitality of theological learning in the best Counter-Reformation spirit. 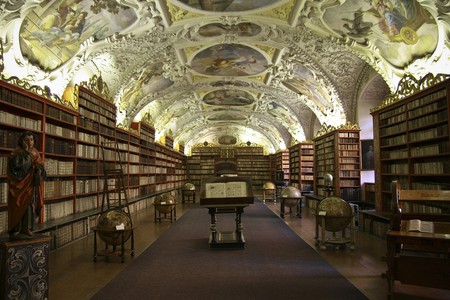 The Black Diamond is a classy yet understated addition to an older building. Jutting onto the waterfront like a ported ship, its huge slanted glass wall provides an immaculate view of the marina to the readers inside. The building is constituted by two halves, united by bridges across a central atrium which double as a symbol of the building’s effective unity between Denmark’s past and present. 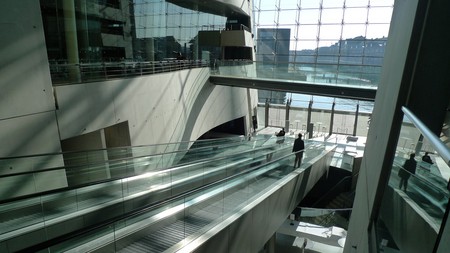 Inside the Black Diamond | © Kristoffer Trolle/Flickr
Give us feedback