8 of the Oldest Buildings in the World 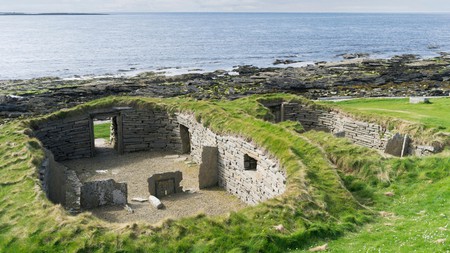 The man-made Knap of Howar on the island of Papa Westray, one of Scotland's Orkney islands, has stood for almost 6,000 years | © Danita Delimont / Alamy Stock Photo

Humans have been flexing their architectural muscles for thousands of years, and the strongest man-made structures have managed to stand upright to this day. From the Knap of Howar in Scotland to the Pyramid of Djoser in Egypt, here are some of the oldest buildings around the world. 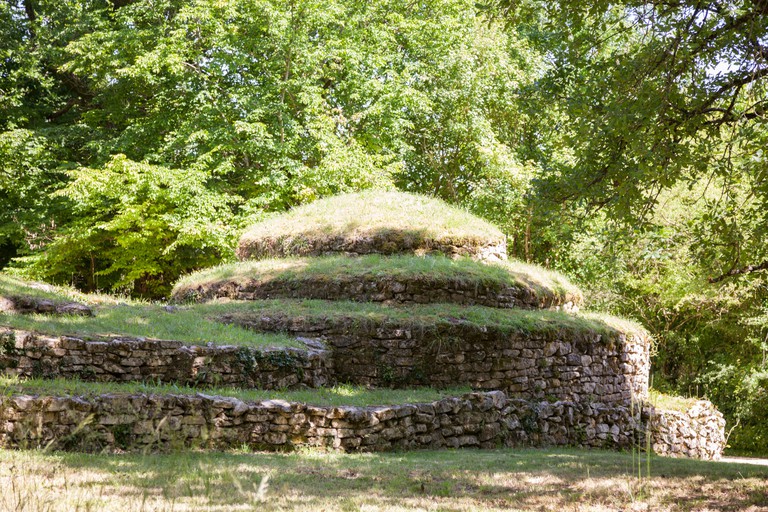 © M @ rcel / Alamy Stock Photo
The Tumulus of Bougon consists of a group of five Neolithic barrows in France that date back to 4800BCE. Over 200 skeletons were discovered in the first site (Tumulus A) during its 1840 excavation, alongside stone tools, pottery, pierced teeth and chains of seashells. All five of the barrows vary significantly architecturally, reflecting the more than 1,000 years of construction that the site had experienced between the 5th and 4th millennia BCE.

Historical Landmark
Facebook
Email
Twitter
Pinterest
Copy link
Share
Map View
The ancient city of Uruk (now in Iraq) itself was once home to around 40,000 residents, making it the largest urban area in the world at the time (3100BCE). The Anu Ziggurat dates even further back than this, to 4000–3800BCE. Dedicated to the sky god Anu, the temple would have been the most eye-catching structure in the city, visible from many miles away. A ziggurat itself is a terraced compound of successively receding levels. The Tower of Babel narrative within the Bible is considered by scholars to be strongly linked to Mesopotamian ziggurat construction. 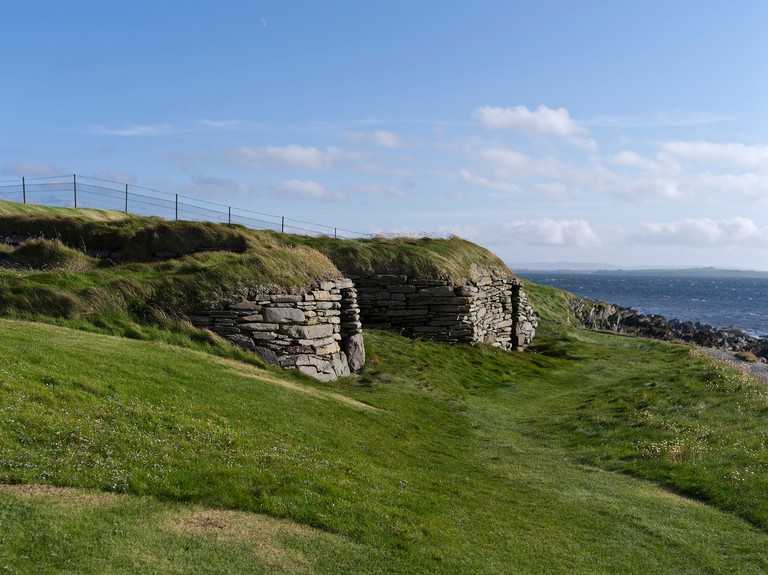 © Doug Houghton Orkney / Alamy Stock Photo
Many of the world’s oldest surviving buildings consist of tombs, temples and graves, but the Knap of Howar represents one of the oldest homes in the world. Built in 3700BCE, the Knap of Howar has stood for almost 6,000 years on the island of Papa Westray in Orkney. The Neolithic farmstead looks out onto the sea, and much of the original furniture is still intact today. The enchanting view out to the North Sea is the same now as it was then, and Orkney has continued to be a popular tourist destination in the 21st century.

The Cairn of Barnenez, France 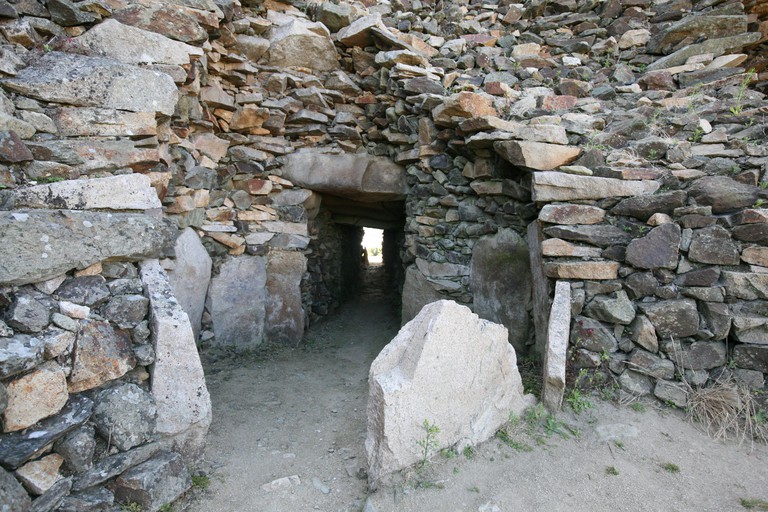 © Photo 12 / Alamy Stock Photo
The Cairn of Barnenez is potentially the oldest known building on earth. It’s what’s known as a “Passage Grave”, a burial chamber covered in earth or stone. Located in northern Finistère (the extreme west of Brittany in France), it dates back to 4850BCE and is over 70m (230ft) long. The site is also well known for its Megalithic art. As you walk the chambers of the Cairn, you’ll discover engraved symbols depicting weapons like bows and axes, as well as snakes and a mysterious U-shaped sign. Similar symbols have also been found in other ancient sites across Brittany.

Historical Landmark
Facebook
Email
Twitter
Pinterest
Copy link
Share
Map View
The Sechin Bajo is the oldest known building in the Americas, found in the valley of the Sechin River in Peru. The archaeological site covers a sizeable 37ha (91 acres), with the oldest building among it being over 5,720 years old (3700BCE). One of the most interesting discoveries at the site is an ancient frieze (in architecture, part of the horizontal band in between a column and the roof above it), which included depictions of various mythological and religious figures, as well as weaponry and insignia. 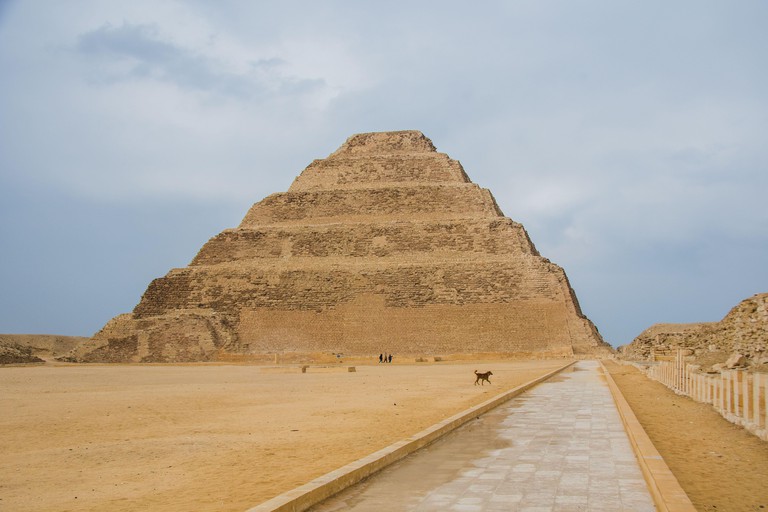 © statikmotion / Alamy Stock Photo
The Pyramid of Djoser is the earliest man-made, large-scale stone structure on Earth and dates back to around 2670BCE. It can be found in Saqqara, an ancient burial ground in the heart of the Egyptian city of Memphis. The building itself may not be quite as old as some of the other structures on this list, but it represents a seriously impressive jump in human engineering. It’s the earliest example of Egypt’s iconic pyramids, reflective of the country’s fascinating ancient past.

Historical Landmark
Facebook
Email
Twitter
Pinterest
Copy link
Share
Map View
This structure is the largest dolmen (single-chamber Megalithic tomb) in France and dates all the way back to 3000BCE. The 23m (75ft) building would have contained a great number of skeletons during the Neolithic period, but it’s now empty and resembling the sort of home that Fred Flintstone might have lived in. It is, unsurprisingly, a popular spot for tourists exploring the Saumur region of France. 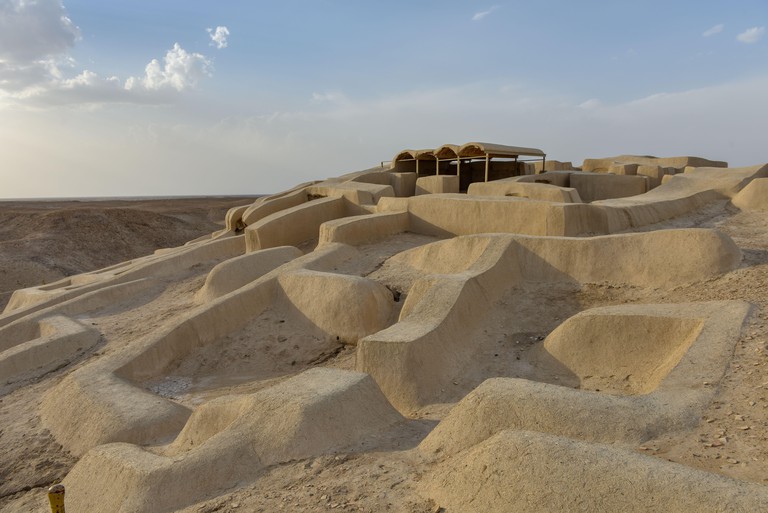 © Amin Bre / Alamy Stock Photo
One of the oldest preserved settlements that dates back to 3200BCE, Shahr-e Sukhteh (meaning “The Burnt City”) was a key location for trading routes between Mesopotamia, Iran, Central Asia, Indian civilisations and even as far as China. The city burned down three times before it was eventually abandoned (hence the name) and has been a key archaeological site to help modern historians understand the emergence of complex societies during this time period.
Give us feedback