An Illustrated Love Letter to the World's Oldest Living Organisms 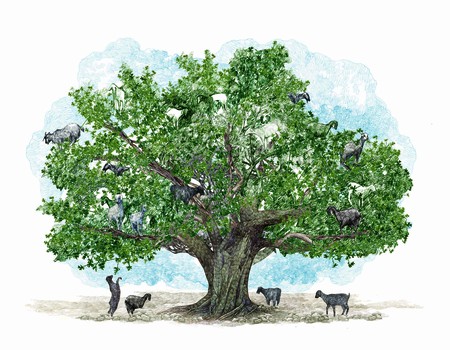 Around the World in 80 Trees, a beautiful volume written by Jonathan Drori and illustrated by Lucille Clerc, takes an intimate look at some of the most majestic living organisms on the planet.

Using a mix of folklore, botany, and cultural influence, the book, published by Laurence King, illuminates the sacred, diverse world of trees. Detailed illustrations radiate from the page, while maintaining a mature sense of realism and accuracy in their botanical depiction. Around the World in 80 Trees also highlights nearly everything you need to know about 80 different trees around the world, with a biophilic twist.

A narrative of Ireland’s strawberry tree, a “dense twisting evergreen” with “vivid foliage… like drifts of miniature hot-air balloons,” accompanies a three-part illustration of its stem, golden-yellow fruit, and lush green crown.

Somalia’s Frankincense is outlined in ornate language, with descriptions of the tree’s creamy petals and balsamic fragrance, as well as an explanation of its religious usage (it was considered by the Egyptians to be “the sweat of the gods fallen to Earth”).

But, above all, Around the World in 80 Trees is a cultural tome, rooted in each species’ geographical location; it reads like an love song to the natural world, brimming with ancient anecdotes contained within the earth. 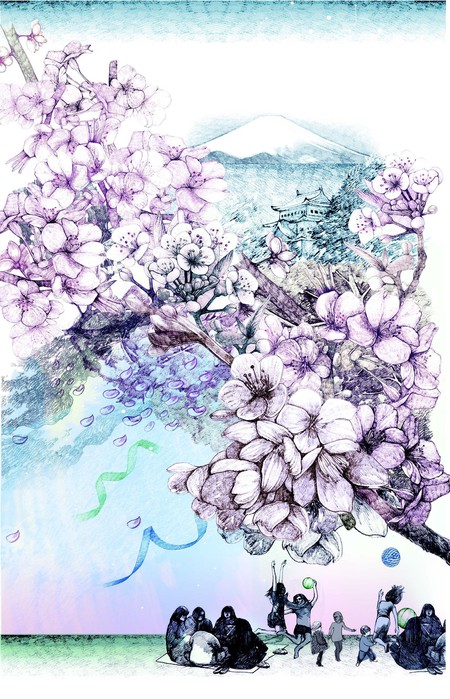 Yoshino Cherry, illustrated by Lucille Clerc in ‘Around the World in 80 Trees’ | Courtesy of Laurence King

Drori selected 80 tales to represent the diversity of trees, emphasizing the complex yet vital relationship between humans, the natural world, and the significance of their location. However, humans are but one organism dependent on trees for their survival; millions of other living creatures are reliant on them.

In the book’s introduction, Driori recounts one of his earliest memories with a tree. A particularly spectacular cedar in Lebanon had been struck by lightning, leaving its limbs strewn and sawn up. Driori’s father wept at the sight of something so “huge, heavy, beautiful” rendered lifeless.

His mother offered sage insight as to why that moment was so powerful: “There’s a whole word in that tree,” she said. 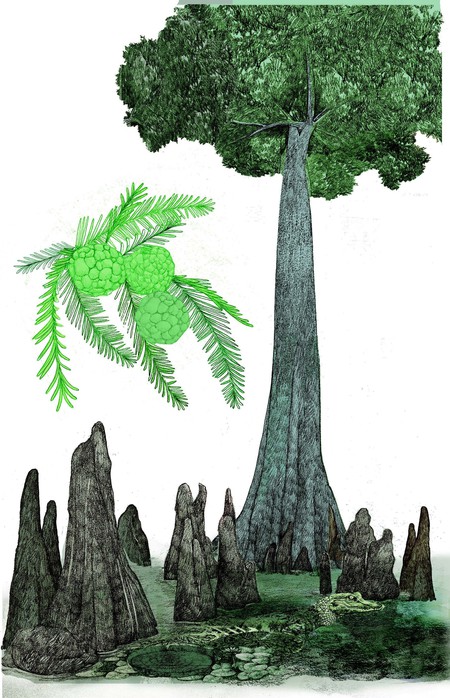 Here’s an exclusive excerpt* from Around the World in 80 Trees, courtesy of Laurence King:

The tree of heaven is at once cherished and despised. It gets its scientific name from the Moluccan ai lantit, which means roughly ‘tall as the sky’… The tree is native to China, but when its seed was introduced in 1820 in New York state, it impressed plant aficionados with its generous shade and unfamiliar ornamental quality. With what would later become a terrible irony, the seeds of this new arrival were even distributed by the US Department of Agriculture, after it had scoured Europe and Asia for sturdy plants that might be popular.

While the name of the tree in most European languages emphasizes its height or how fast it grows, its name in northern and central China, chòuch ̄un (臭椿), ominously translates as ‘foul-smelling tree’. Crush the leaves or break a stem and you’ll suffer a waft of cat pee or perhaps rancid peanuts. But it’s not until June, when there are large, showy clusters of small yellowish-green flowers, that things really get nasty. Trees can be of either gender, and the reek from the male flowers could stun an ox: descriptions include rotting gym socks, stale urine or even human semen. Doubtless this special fragrance is intoxicatingly lovely for the insects that carry pollen from male to female owners.

In summer a female tree can produce 350,000 seeds, each one at the centre of a samara – a wing of brous papery tissue – which ripens from amber to crimson. They spin prettily as they fall, carry far on the slightest breeze and can germinate just about anywhere. Easily colonizing disturbed land along railway lines or on building sites, the tree can cope with cement dust and noxious industrial fumes. Storing water in its root system, it is drought-tolerant, too, and will thrive where few others survive.

That is why Betty Smith used the tree of heaven as a metaphor for immigrant life in her classic American novel A Tree Grows in Brooklyn (1943), in which the titular sapling tenaciously makes a success in poor conditions, despite being under-appreciated and struggling to reach the sky. As they say in Brooklyn, what’s not to like? Actually, plenty.

Growing like crazy, antisocial and able to reproduce sexually at only 2 years old, the tree of heaven is often banned from cultivation. Even in China, where it is held in check by competitors and insects with which it has co-evolved, its reputation is such that a wayward child might be called a ‘worthless ailanthus sprout’. For some gardeners, however, it’s a much-maligned tree of surprisingly exotic splendour. There is truth in both views. As Betty Smith put it in the introduction to her story, ‘It would be considered beautiful but there are too many of it.’

*Excerpt has been edited for brevity