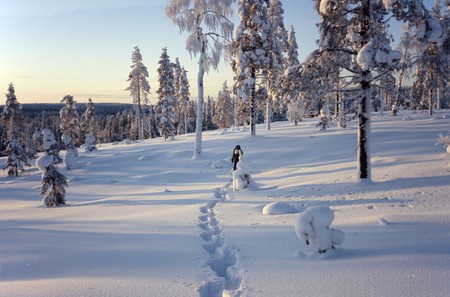 Explore the snowy wilderness of Lapland from the city of Rovaniemi

Our winter travel guide to Rovaniemi, Finland, will have you dreaming of snowy landscapes, traditional Lappish cuisine and husky sledding. Read on to discover more of Rovaniemi’s winter charm.

At a latitude of 66.5° north, Rovaniemi, the capital of Finnish Lapland, sits almost exactly on the Arctic Circle. Blanketed in snow for around half the year, it’s a fantastic base for venturing into Europe’s largest wilderness on husky sledding, snowmobiling, ski trekking and Northern Lights-chasing adventures. There’s also plenty to see and do in the city itself. To help you plan your visit, follow our winter travel guide to Rovaniemi, Finland. 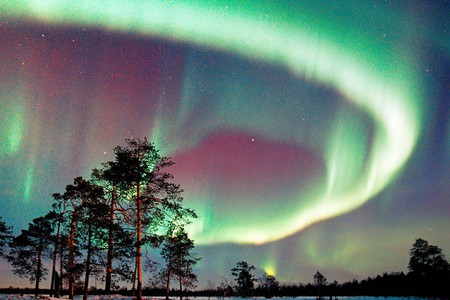 A brief history of Rovaniemi

Historical records indicate that the area around Rovaniemi has likely been inhabited since at least the Stone Age, though its first mention in official documents dates back to 1453. At that point, it was a cluster of small, agricultural settlements at the confluence of the Kemijoki and Ounasjoki rivers. It wasn’t until the 19th-century that it became a key commercial centre for the region, as Lapland’s abundant natural resources were used to fuel Finland’s economic development.

Rovaniemi was almost entirely destroyed by the German army during the Second World War, so the city you see today was built from 1946 onward. Finnish architect Alvar Aalto played an integral role in the reconstruction project, including planning Rovaniemi’s new street layout in the shape of a reindeer’s head, with the sports stadium, Keskuskenttä, representing the eye. 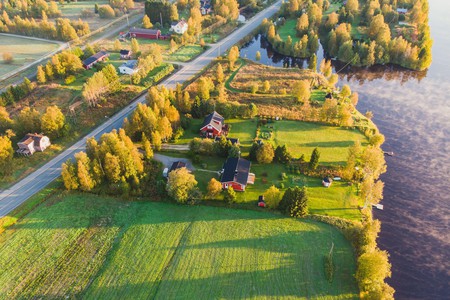 Modernist architectural highlights include the Arktikum museum and science centre, Lappia House (which contains the Rovaniemi theatre, local radio station and Lapland Music Institute), the city library, the town hall and Jätkänkynttilä, a bridge which crosses the Kemijoki River, with two columns representing a lumberjack’s candle. Today, Rovaniemi is home to just over 60,000 people and is one of Finland’s most important tourism hubs.

Home to Finland’s third-busiest airport, Rovaniemi has excellent connections to numerous destinations in Europe. If you’re travelling from the UK, you can fly direct from London Gatwick, which takes three hours and 25 minutes. Paris, Milan, Barcelona, Istanbul and Düsseldorf also offer direct flights to Rovaniemi between late autumn and early spring. However, these often sell out, so it’s best to book well in advance.

For greater flexibility, or if you’re travelling from outside of Europe, there are also several daily flights between Helsinki and Rovaniemi (which take around 80 minutes), so you can easily transit via the capital – or even incorporate a mini city break at the start or end of your trip. Alternatively, you can fly direct from Gatwick, Manchester, Birmingham or Glasgow to Kittilä, which is around a 100-minute drive from Rovaniemi.

Another option is to take the train from Helsinki, which takes around eight hours and 20 minutes in the daytime, or 11-12 hours on the overnight Santa Claus Express. Expect to pay around €60-70 for a standard return ticket or €150-200 for a two-person private cabin.

By far the primary appeal of visiting Lapland in winter is the sheer variety of outdoor adventures on offer, including husky sledding, ski trekking, snowmobiling and ice fishing. The Northern Lights are visible on roughly 200 nights a year here, so, if the weather conditions are clear, you may be fortunate enough to witness this spectacular natural phenomenon. There are dozens of tour operators in Rovaniemi for all these activities, and you don’t have to venture very far out of the centre to be fully immersed in nature. 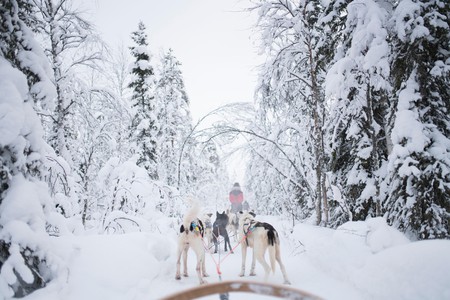 There’s also plenty to see and do in the city. Head down to the Arktikum science centre and museum to learn all about the history, nature and culture of Lapland and the Arctic – as well as the threats they face from climate change – through a series of interactive exhibitions and events. Entry costs €15 for adults; check the Visit Rovaniemi website for seasonal opening hours.

It’s worth checking out the Korundi House of Culture, which houses contemporary Finnish art and hosts concerts by the Lapland Chamber Orchestra in an old post bus depot: one of the few buildings in Rovaniemi that survived the second world war. Plus, explore the Pilke Science Centre, dedicated to the ecology and economy of Finland’s forests.

Meanwhile, the most popular attraction is Santa Claus Village, 8km (5mi) northeast of the city centre, where you can soak up the festive atmosphere, shop for handcrafted souvenirs, meet huskies and reindeer, and snap a photo standing directly on the Arctic Circle. It’s open every day of the year, and you can get there by taking the public bus (number eight) from the railway station, which costs around €7 for a return trip and takes roughly 20 minutes each way.

Snow typically starts to fall in Rovaniemi in October; usually, by late November or early December, the region is covered in a thick, white blanket. Unsurprisingly, December is one of the most popular times to visit, as Lapland is the perfect destination to embrace the festive spirit, and Rovaniemi is particularly charming when illuminated by Christmas lights.

January and February are still good times to visit if you want the full Lapland winter experience. However, at this time of year, be prepared for bitterly cold temperatures (often well below -10°C/14°F) and only a few hours of daylight, as the sun barely rises above the horizon before disappearing again in the depths of winter. 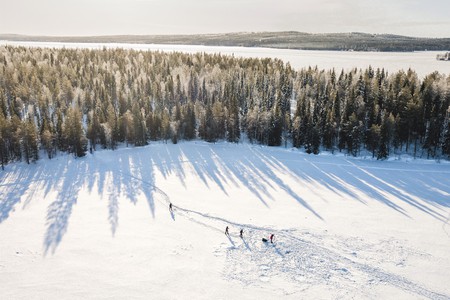 If you’re willing to wait until winter draws to a close, March is an opportune window to visit. You’ll benefit from slightly warmer temperatures, significantly longer days and fewer crowds, while still being able to enjoy the snowy landscape and potentially catch a glimpse of the Northern Lights dancing across the night sky.

Picking the best place to stay in Rovaniemi depends on your budget and what kind of experience you’re after. If you’re happy staying in the city centre itself, there are plenty of affordable options, such as Guesthouse Outa, Wherever Mini Hotel and Hostel Café Koti, with double rooms available for around £65-105 per night. Motelli Rovaniemi, Hostel Tikka and Hostel Ibedcity are budget-friendly options a little further out of town.

Premium hotels in the city centre include Arctic Light Hotel, Crystal Arctic Suites, Arctic City Hotel and Scandic Rovaniemi City, all of which include breakfast in their rates. There’s also no shortage of luxury apartments, featuring well-equipped kitchens, spacious living areas and, in most cases, access to a sauna. 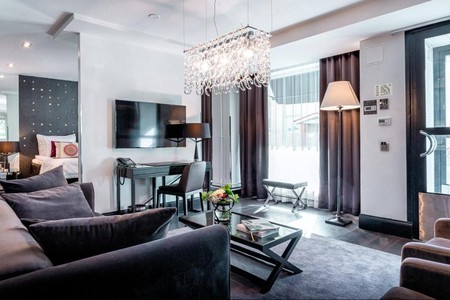 If you’re looking for a truly unforgettable accommodation experience, however, there are several standout options in the surrounding area. At Arctic SnowHotel & Glass Igloos, 27km (17mi) outside of Rovaniemi, you can sleep either in a room made entirely of ice (with an extra thick sleeping bag to keep you warm), or in an igloo with underfloor heating and a 360-degree-view glass ceiling: a prime spot for viewing the Northern Lights.

Apukka Resort, 16km (10mi) outside of Rovaniemi, features an array of elegant aurora suites and cabins with panoramic glass rooves, as well as its own ice hotel. Meanwhile, the Arctic Circle Wilderness Lodge, 23km (14mi) outside of Rovaniemi, is a tranquil spot on the banks of the Raudanjoki River, with traditional log cabins surrounded by forests.

On Culture Trip’s exclusive small-group Finnish Lapland trip, you’ll stay on a private island just outside Rovaniemi, and dine by an open fire in a traditional Lapp Hut.

An essential part of visiting Rovaniemi is sampling traditional Lappish cuisine, whether it be reindeer stew served with almond potatoes, fresh salmon or Arctic char caught in one of the nearby lakes and cooked by an open fire, or leipäjuusto, a soft cheese dessert served with cloudberry jam. Consider booking a table at Restaurant Nili, Monte Rosa or Arctic Restaurant in the city centre. Alternatively, try Lapland Restaurant Kotahovi, in Santa Claus Village, for an authentic taste of Lapland.

Ravintola Roka is a reliable spot for hearty sandwiches, soups and salads, while Cafe & Bar 21 is renowned for its sweet and savoury waffles, as well as its delicious cocktails. Looking to enjoy a few beers in the evening? Hemingway’s, Bull Bar & Grill, Kauppayhtiö and Uitto Pub are the places to go. If in doubt, head down to Lordi’s Square and take your pick from the cluster of lively spots nearby; just brace yourself for the fact that alcohol isn’t at all cheap in this part of the world.