A Brief Introduction To The Art Of Gargoyles

Gothic sculpture, characterized by the representation of animals, both real and fantastic gave rise to gargoyles. These mythological representations, intentionally grotesque and ironic, have a practical architectural function: to drain water from the roofs of churches and cathedrals. Culture Trip explores what makes these little creatures so fascinating. 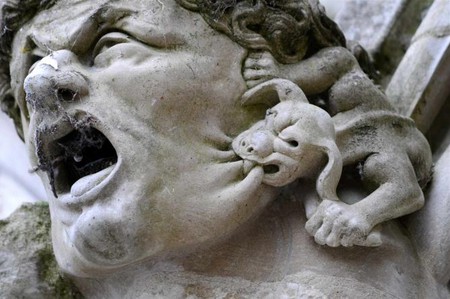 Gargoyle in the cathedral of Lincoln, England, between 1185 and 1311 / | © Akoliasnikoff /WikiCommons

During the final phase of Romanesque architecture, during the 11th and 12th centuries, sculpture was a great success. Romanesque style was characterised by its Roman and Germanic elements, mingled with Byzantine, Islamic and Armenian influences, but it was in this time that traces of the Gothic began to emerge, featuring numerous depictions of animals, both real and fantastic, adorning the nooks and crannies of architectural structures.

Animals such as lambs, fish, pigeons, eagles, bulls and lions all had great symbolism within Christianity, and frequently decorated architectural constructions, especially churches, along with other mythical animals like griffins, gargoyles, chimeras, dragons and basilisks. These animals were designed to be intentionally grotesque and ironic, typical of the bestiaries and demonological treatises of the Middle Ages, and were often associated with a moral lesson.

These fantastic and diabolical representations granted freedom to the sculptor within the ecclesiastical censure. Thus artists could give free rein to their imagination, guided by their different moods, and could represent what they wanted through a variety of extravagant and grotesque images. 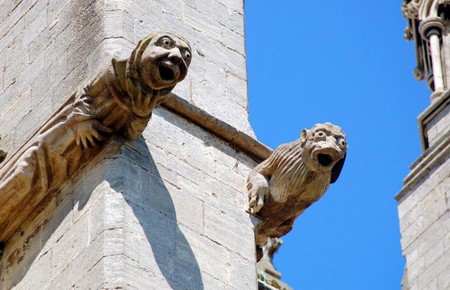 Medieval sculptors particularly found inspiration in Ancient Greek mythological beings called griffins. Griffins are winged beings with a lion’s body and eagle’s head. There is a legend surrounding the griffin, which says that these beings belonged to a warrior race created to protect and help the man in the night hours, when he was helpless. During daylight hours, griffins were inanimate stone, but in the evening they would come to life. Men and griffins therefore created an alliance to protect each other: men would protect the griffins during the daylight hours, while the griffins would take charge overnight.

Perhaps due to their stony nature, medieval sculptors called the first gargoyles ‘griffins’, in clear reference to Greek mythology. But soon the definition of gargoyles and griffins began to diverge, with gargoyles acquiring a reputation of their own as an architectural element.

Today, the definition of a gargoyle is the sculpted portion of a gutter or water spout. The basic functions of gargoyles are three: to evacuate rainwater from rooftops, to decorate drains, and, based on popular legends and beliefs, to act as a symbol and reminder of the aberrations of hell. The cathedral in Lyon is the first example of gargoyles as architectural features. It is a widespread misconception to call all grotesque or fantastic creatures which decorate medieval churches gargoyles. In fact, a sculpture can only be called a monstrous representation can only be called a gargoyle when it has these specific architectural functions. For this reason, the famous and mysterious images installed by Eugène Viollet-le-Duc in the Cathedral of Notre Dame de Paris should be called chimeras, not gargoyles, as they are only decorative representations. 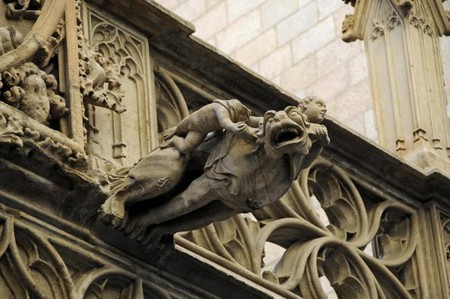 Etymologically, the word gargoyle comes from the French ‘gargouille’, which translates to throat. Gargouille also relates to an old French legend which may have had some bearing on the word. According to the tale, there was a dragon called La Gargouille with a long and twisted neck, a prominent mouth with powerful jaws, terrifying eyes and enormous wings, who lived in a cave near the River Seine. It fed on humans, and sowed chaos, panic and destruction wherever it went, sinking boats, causing floods and burning anything that stood in their way.

The whole population was frightened by its presence. To placate its anger, the inhabitants of Rouen, every year, offered it a human sacrifice, usually a convicted felon. By the year 600, Christian priest named Romanus reached Rouen, and offered to deliver the people from the dragon in exchange for their converting to Christianity and building a church. Finally, La Gargouille was burnt at the stake, with its head and neck hung at the village entrance as a warning and reminder. People began carving the dragon’s head on the sides of buildings, and often onto water spouts, leading to the gargoyles we see on churches and cathedrals today.