15 Herbal Teas and Their Health Benefits 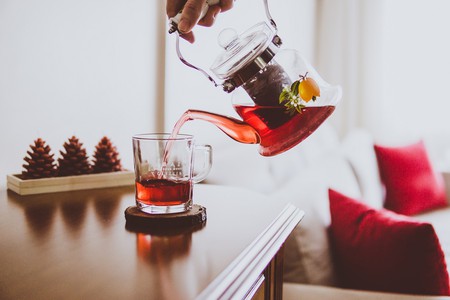 The Brits have long been famed for their tea-drinking habits and, as it turns out, they know a thing or two about sipping their way to good health. A lot has changed, however, since a murky builder’s brew or a cup of dusty Earl Grey were the only options. From black tea to turmeric, matcha to camomile, your morning fix could go a long way to promoting a healthy lifestyle.

This fine-grain, lime-green powder might look dubious, but it packs an almighty punch. Whisk with hot water or milk to produce a brew heralded as a metabolism-boosting, antioxidising, cholesterol- and blood-sugar-lowering wonder cup.

There are bold claims surrounding humble turmeric, from its status as an anticarcinogen to its ability to purportedly stave off Alzheimer’s disease. To brew yourself a cup of this golden miracle, boil four cups of water, add 1 teaspoon of turmeric and bring to the boil. Strain through a fine sieve and add a glug of honey to taste.

A perfect tonic for naughty rabbits, it turns out a nice cup of camomile tea can do impressive things for humans too. While it’s already famed for its ability to calm the nerves, scientists now claim that camomile can keep diabetes under control and potentially improve the complexion.

If you haven’t sought the balm of peppermint tea after a night on the tiles, then this may well be a game-changer. Refreshing, natural, cleansing – the best way to enjoy mint tea is to submerge the fresh leaves into just-shy-of-boiling water. Give it three minutes and sip your way to better digestion.

While the correct pronunciation for this tea might divide the crowd, one thing all
experts seem to agree on is its anti-inflammatory properties. Brew this one for seven minutes, sweetening with honey or agave.

Wake up your senses with this major aniseed hit. Even if you’re not a fan of liquorice,
fennel tea is worth a try if you want to burn fat, cleanse the blood and boost your immune system.

Uncured and as natural as it comes, white tea contains catechins, thought to fight cardiovascular disease and potentially cancer.

Delicately floral with deep raspberry notes, this humble little tea is packed with iron and can ease canker sores, cold sores and anaemia. Careful with this brew if you’re pregnant – it is known to promote uterine health and is often used to encourage the wee one along in the latter stages of pregnancy.

With that pleasing rolling ‘o’, oolong tea calms in its very articulation. This deeply dark, smoky tea contains polyphenolic compounds, responsible for removing free radicals from the body. It is also thought to ease symptoms of dermatitis and promote good bone health, so load up your tea ball and leave for two to six minutes to brew, according to taste.

Grate a generous piece of ginger root into a mug, steep in hot water for two minutes and strain for a glorious, spicy treat. This peppery cupful will contribute generously to your daily dose of vitamin C and kick-start your circulation.

Another free-radical-banishing brew, orange peel tea is packed with flavonoids, which work to combat the aging process. With crucial orange oil, orange peel tea will, if taken consistently, reduce acne and inflammation. Peel an orange and roughly chop the peel into small pieces. Simmer the peel in water with cinnamon for 10 minutes before straining and imbibing.

With a pleasantly grassy aroma, sencha green tea is a superstar. Boosting the metabolism, levelling you up on energy and brightening the skin, sencha should be a staple in any health-conscious household.

This bitter brew will give you a lot to smile about. According to some researchers, those who regularly consume black tea are 50% less likely to exhibit early signs of dementia. It may well fortify the lungs as well, so get brewing!

For the last entry, how about your favourite cup o’ Joe like you’ve never tasted it before? Research shows that steeping coffee leaves in water releases unprecedented levels of mangiferin, thought to reduce the risk of cholesterol and diabetes.