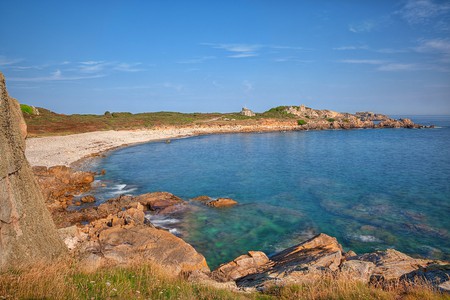 From picture-perfect beaches, to magic resting stones, fabulous food, creepy underground hospitals and complete and utter peace and quiet, Guernsey has all of the ingredients needed to conjure up the perfect getaway. Here are 12 reasons to persuade you to take a long weekend and see what the Blue Island really has to offer.

Church
Facebook
Email
Twitter
Pinterest
Copy link
Share
Map View
The Little Chapel of St Andrews has to be one of the most charming places on the island. This small chapel, which was the creation of Benedictine monk Brother Deodat, is a scale model of the Basilica at Lourdes. Brother Deodat went one step further with the decor however and painstakingly encrusted it with thousands of pebbles, shells and colourful bits of china. Inside, there is only room for the priest and maybe eight people!
Open In Google Maps
Guernsey, St Andrew, Guernsey
+441481723552
Visit Website
Give us feedback

Between 1940 and 1945, when Nazi occupying forces were in charge of the island, hundreds of slave labourers dug this 7,000 square metre underground hospital. By the time the construction was finished at the onset of D-Day, the hospital could house 500 patients. It soon got filled up with casualties from the D-Day invasion, but was abandoned after three months and efforts moved above ground when it became obvious that dark and damp conditions were not good for healing and recovery.

Guernsey’s spectacular south coast is riddled with beautiful bays, secluded coves and harbours so pretty they almost don’t look real. For the most dramatic scenery on the island, head to Pleinmont, where the clifftops are covered in thick heather before they fall away to the sea below. The view from here out to Hanois lighthouse is something pretty special, especially in the middle of winter and the elements are putting on a show.

There is always a sheltered spot at Port Soif and this horseshoe shaped beach is a firm favourite with locals who flock here at weekends. At low tide, Port Soif is perfect for clambering, exploring and rock pooling so remember to bring a bucket and a net! High tide here is a rather spectacular affair, as the turquoise waters lap the golden sand.

The Wolf Tree is something of a legend in Guernsey and hard to find even as a local, never mind a tourist. Nonetheless, The Wolf Tree can be find near La Hugette School and is said to have a wolf’s face on it. It is said that if you scratch off the face and come back minutes later, it will be intact again, all thanks to the powerful wolf spirit.

Guernsey is absolutely rammed with myths and legends. Tales of phantom pigs, snow white horses and the devil and fairy rings are out in full force all over the island. Everywhere are stone burial chambers built above ground and one of them, Le Dehus, has a ghostly face carved into the stone. Witches resting stones can be found at almost every turn and there are roads named after local werewolves.

The Venus Pool at Lihou

Natural Feature
Facebook
Email
Twitter
Pinterest
Copy link
Share
Map View
Only accessible at low tide via a man-made causeway, Lihou is a small island just off the coast of Guernsey. The Venus Pool, which is a natural pool that forms at low tide, is so deep you can jump in it and isn’t for the faint of heart. Check the tides before you go and remember to take a packed lunch as there is nowhere to buy food once you’re over there.
Open In Google Maps
Guernsey, St Pierre Du Bois, Guernsey
Give us feedback

Museum
Facebook
Email
Twitter
Pinterest
Copy link
Share
Map View
Guernsey claimed fame in 1855 when the exiled Victor Hugo made his home at Hauteville House. Here, he spent 15 years writing three novels, the most famous of which being Les Miserables. You can take a guided tour of St Peter Port, where it’s possible to tick off many Hugo hot spots, as well as visit his house and museum.
Open In Google Maps
38 Hauteville, Guernsey, GY1 1DG, Guernsey
Visit Website
Give us feedback

It’s not a trip to Guernsey without eating both gach and gach malee (pronounced gosh and gosh malar). The first is a bread which is made with raisins, sultanas and mixed peel, and the other is a sweet goodness which is so bad it could clog your arteries, but is one of the most moreish pieces of deliciousness on the planet. Traditionally, it is made with apples, flour, sugar, milk and suet, then cooked for one hour and three quarters.

A pint at the Rockmount and a sunset swim

Gastropub, British, $$$
Facebook
Email
Twitter
Pinterest
Copy link
Share
Map View
Some of the greatest things in life are simple and there is nothing simpler than having a pint of whatever is on draft at the Rockmount and looking out to sea. The view here is always spectacular, no matter if it’s monsooning, the sun is shining or a gale force wind is blowing. In the summer, pop your pint on the wall and hop in the sea for a dip at the end of the day.
Open In Google Maps
Côbo Coast Road, Guernsey, Castel, GY5 7HB, Guernsey
+441481252778
Visit Website
Give us feedback

If you’re one of these people who thinks sunrises are better than sunsets, then get out of bed before dawn and head down to Jerbourg. This dramatic section of the coast is positively stunning and there is little better than seeing the day come in as the rest of the island sleeps over those big cliffs.

When the tide is in, get the adrenaline pumping at Havelet by taking a run, jump off the wall and into the sea. All the cool kids are doing it, after all.