11 Steaks You Should Know About And How To Cook Them

A good steak is a thing of beauty, but with a large range of different cuts available, which one is right for you? Here’s all you need to know.

Mmm steak, thick juicy steak. Meat doesn’t get much better. But with more than one way to cut up a cow, making sure you get the right steak for your needs ensures everyone leaves the table happy. In the past, steak meant fillet, sirloin or rib eye, but in recent years butchers and chefs have got much more creative, so that today steaks come in a range of sizes and shapes all of which have a different texture and cooking method. Not only that, but the same steak might have different names in different countries, even English-speaking ones, so knowing what you’re asking for wherever you are in the world helps. When it comes to steak, buy the best you can afford. Choose grass fed over grain, and dry-aged meat over wet-aged. Other than that, get the grid iron on, fire up the stove or even better, coals, and get cooking.

As the name suggest, this cut comes from the rib section in the middle of the beast. It has seams of fat running through it, or often a small nugget of fat at the center (the ‘eye’). In most shops it’s sold off the bone, though a few restaurants now sell ‘on bone’ versions. Known as ‘Scotch fillet’ in Australia and entrecôte in France. 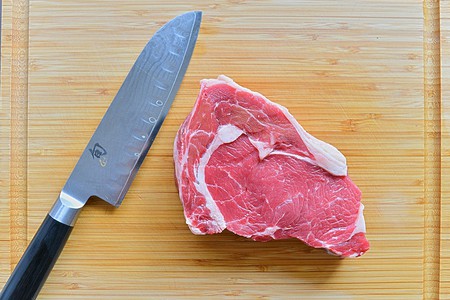 A new cut taken from the rib section but with a the long rib bone left on, which gives the look of a tomahawk axe. It’s a big steak, over 1.2kg and as thick as the rib bone it’s attached to. So as well as cooking over coals or on a griddle, you might need to finish in the oven.

The steak with many names. In modern French it’s known as aloyau or faux-filet, while in the USA it’s called New York Strip. Like ribeye, many butchers now offer this ‘bone on’. The word sirloin comes from the French for ‘on the loin’, and is nothing to do with an English King (usually Henry VIII) being so impressed with a steak that he knighting it ‘Sir Loin’. 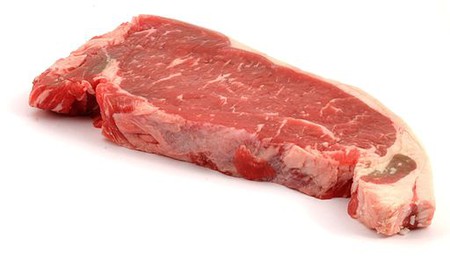 Fantastic steak that’s cheaper than sirloin and can, if kept and matured well, have more flavor. As you’d expect it comes from the rump or rear of the animal. This is a steak you want to eat thick, so look for ones over 5cm. This is a great steak for serving between 2-4 people.

Attached to the loin inside the back of the animal, so consequently does very little work like other muscles. The result is a very tender eat, so much so you can cut it with a spoon. However, it can lack a little in flavor. It’s best cooked quickly and gently, and served rare.

A T-bone comes from the lower middle area, and comprises a sirloin on one side, and a piece of fillet on the other. If the fillet side is small, it’s a T-bone, if it’s large, the name changes to a porterhouse. It takes skill to cook however, as you don’t want to overcook the fillet, it’s a great ‘his and hers’ steak. 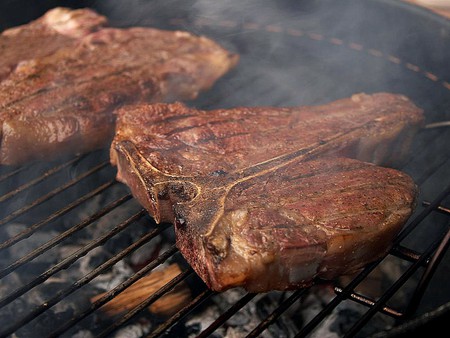 In 2002 the Universities of Nebraska & Florida were asked to find new steaks from the front quarter of the animal (most steaks come from the hind quarter). The result is the flat iron steak. Best cooked rare it has a feather-like texture. Also known as the butler’s steak in the UK, and the Oyster blade steak in Australia.

The traditional French bistro’s steak of choice and known as onglet there. Best served rare or medium rare, otherwise it can be tough. It comes from the underside of the animal and has a strong, rich flavor.

This steak is technically considered offal, as it comes from the the abdominal muscles and is also known goose skirt in the UK. When sliced against the grain its open texture gives a great mouth feel. It’s often found in South American dishes as well as Asian stir fries.

Pronounced ‘pick-ann-ya’, this part steak, part roasting joint is found in Brazil’s many steak houses where it is much revered. In the UK and US, ask your butcher for the top sirloin cap or rump cap.

This steak can be cut from a variety of muscles, but often comes from the flank on the hind legs. It’s main attribute – besides its cheapness – is that it’s very thin and cooks quickly over a hot flame in around a minute – hence the name. Most often found in baguettes and sandwiches.

So there you go, now all you need is a fork and a good, sharp knife.