10 Most Enchanting Streets In The World

Perfect for a leisurely stroll, these ten enchanting streets across the globe — from the beautiful cherry blossom-lined Heerstraße in Bonn, Germany to Boston’s historic Acorn Street — are just begging to be explored. 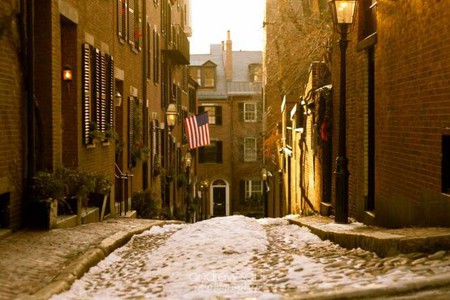 Nestled in Boston’s beautiful Beacon Hill neighborhood, Acorn Street is a charming cobblestone alley pegged as the most photographed street in the USA. Narrow and just one block long, Acorn Street dates back to the 1820s and is flanked on one side by gorgeous redbrick row houses first inhabited by tradespeople and artisans and on the other by some fine examples of Beacon Hill’s enchanting hidden gardens. Though it’s beautiful during the day, Acorn Street is all the more charming during early evening in the fall when working gas lamps illuminate the vividly colored leaves overhanging the street.

For 11 months of the year, Bonn’s Heerstraße is a regular —albeit attractive — thoroughfare running through the city’s arty Altstadt neighborhood, but during a couple of weeks each mid-April, the Heerstraße is transformed by beautiful, flowering cherry blossoms that form a dreamy pink canopy over the street. Part of a plan to improve the ecology and living conditions of Altstadt, the Japanese cherry blossoms were planted in 1984 by city officials on Heerstraße and neighboring Breite Straße, and since, locals and tourists alike have flocked to the area to walk the Instagram-worthy streets. Lasting around 10 days depending on weather, the flowering trees are commemorated with an annual festival, Kirschblütenfest, featuring live music and food stalls.

In the heart of Porto Alegre, a bustling city of 1.5 million and the capital of Brazil’s Rio Grande do Sul province, lies Rua Gonçalo de Carvalho — an avenue often cited as one of the most beautiful streets in the world. Lined with tipuana trees planted in the 1930s, Rua Gonçalo de Carvalho forms a lush green corridor through the urban jungle and is a beloved feature of the city. When the construction of a nearby mall threatened the trees, residents protested and successfully lobbied then mayor José Fogaça to take action. Thankfully, protesters were successful and Fogaça declared Rua Gonçalo de Carvalho a ‘historical, cultural and environmental heritage of the city’ in 2006.

Nestled in the foothills of Morocco’s Rif Mountains, the small city of Chefchaouen is home to a charming old medina whose blue painted houses bathe its narrow streets in an eerily beautiful electric glow. The tradition of Chefchaouen’s blue-washed streets dates back to the 1930s when Jewish refugees fleeing persecution in Europe flocked to the city and began painting its buildings blue, which within Judaism symbolizes the sky and reminds of God’s power. Though the city’s Jewish population has declined in more recent years, the custom is upheld by townsfolk today, and its buildings are regularly repainted to maintain their blue hue, lending Chefchaouen the nickname ‘The Blue Pearl.’

A short, quiet street located between the often tourist-clogged Piazza di Spagna and Piazza del Popolo, film buffs may recognize Rome’s Via Margutta as the setting for journalist Joe Bradley’s apartment in the 1953 film Roman Holiday starring Gregory Peck and Audrey Hepburn. An oasis of calm in heart of the city, Via Margutta’s charming scenery — a gorgeous cobblestone street lined with 16th-century buildings home to apartments, art galleries and osterias — has also attracted artists, including painters Pablo Picasso and Cy Twombly, and the street’s arty heritage is celebrated each year with the I Cento Pittori di Via Margutta (‘One Hundred Painters of Via Margutta’) festival.

Created in 18th-century Ballymoney by the local Stuart family as a stately approach to their home Gracehill House, The Dark Hedges is a beautiful beech tree-lined avenue and one of Northern Ireland’s most photographed spots. Scenic and atmospheric, The Dark Hedges has recently been in the popular medieval fantasy drama Game of Thrones, and while its canopy of beech trees is undoubtedly enchanting, the easily spooked may want to give the road a wide berth — legend has it The Dark Hedges is home to an otherworldly resident, a spectral grey lady said to glide between the trees at dusk.

Running approximately two kilometers alongside an old, tree-lined canal, Tetsugaku no michi is one of the prettiest walks in Kyoto. A favorite route of the famous Japanese philosopher Nishida Kitaro, Tetsugaku no michi is also known as the Philosopher’s Walk and takes strollers past sights including Ginkaku-ji Temple — a UNESCO World Heritage listed Historic Monument of Kyoto — and the quieter, less visited Anraku-ji and Honen-in temples. Beautiful during fall when the leaves turn red, Tetsugaku no michi is especially enchanting during April when the path’s overhanging cherry blossom trees are in full bloom.

Located within the grounds of Prague Castle, Zlatá ulička — which translates as ‘Golden Lane,’ a homage to its former goldsmith residents — is a charming cobbled street dating back as far as the 15th century and populated by tiny, colorful dwellings. A number of Czech literary names have been charmed by the street; Nobel Prize-winning poet and journalist Jaroslav Seifert once lived in a now demolished house there and acclaimed writer Franz Kafka spent a year residing at number 22 Zlatá ulička where he wrote the short story collection A Country Doctor.

The medieval walled town of Visby on Sweden’s largest island, Gotland, is a charming destination no matter which part you are exploring, though a walk along Fiskargränd (‘Fish Alley’) — claimed to be one of the most photographed streets in the country — is especially delightful. Amongst the narrowest of the town’s streets, the picture-perfect Fiskargränd winds its way down from Visby’s old town to the shore, taking walkers across quaint cobblestones and past charming cottages. Visit Fiskargränd in summertime when the street is transformed by beautiful climbing roses that adorn its cottages and Visby proves its nickname, ‘The City of Roses,’ true.