10 Inspiring Live/Work Spaces From Around the World 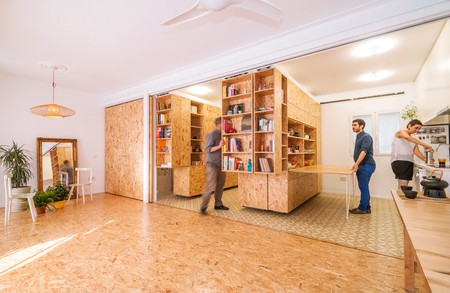 Let’s face it, many of us don’t have room to swing a cat, let alone create a feasible study space in our homes. But what if that doesn’t need to be the case? New book HomeWork: Design Solutions for Working from Home looks at clever ways people have incorporated a home office into their properties, even when they’re tight on space and budget. Here are 10 of the featured projects to inspire your own live/work space.

This apartment in an old diecast factory in Brooklyn was completely gutted, removing a 1.2-metre drop-ceiling that was added in the 1980s, in order to restore the industrial space to its former glory. By reclaiming the original 3.6-metre ceiling height, architect Alex Delaunay managed to create a high storage wall, formed of alternating boxes and niches, with an integrated study area and stairs leading to a new mezzanine level. 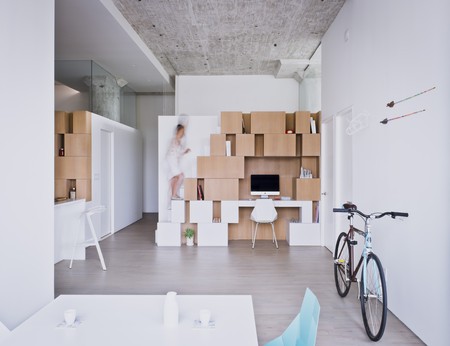 Known for his work with small and modest spaces, Australian architect Nicholas Gurney used simple materials to create this unique work space within a tiny 23-metre-square suburban flat. It took just one carpenter to cut and assemble the kitchen, bedroom and storage plywood blocks on site. Behind the cantilevered desk is a white sliding partition wall concealing the bedroom space, leaving the working environment calm and clutter-free during the day, while the desk can be slid away when not in use. 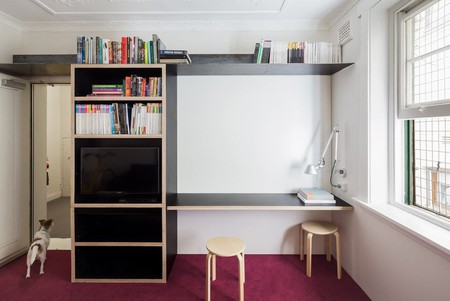 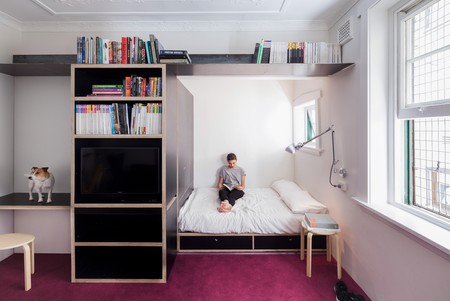 All I Own House

Keen to fit her home and work life into one single space, homeowner Yolanda divided her one-storey home into her residence and a design studio, while managing to keep these two aspects of her life ‘relatively independent from each other’. The former PKMN Architectures (now split into two entities) came up with a bespoke design solution made up of a series of storage units constructed from chipboard. Inspired by mobile archive shelves, they’re suspended from the ceiling and run on an industrial railing system, doubling up as movable partitions that can be transformed to meet various needs throughout the day.

The homeowners of this period property wanted to open up the wall that separated the living room at the front from the lower-level dining room in the middle, but weren’t sure how to create a smooth transition without an awkward step-up between the two. Instead, the architects created a clever solution in order to seamlessly blend the two spaces while also creating a useful and habitable space. The steps incorporate shelves to house books that also wrap around to create shelves and a bench seat, with a desk on the other side. 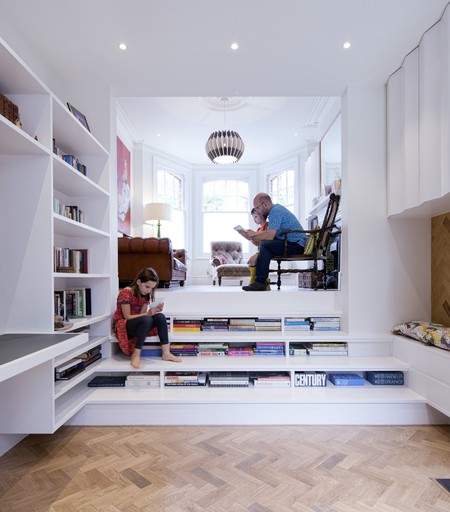 Due to a challenging layout in this 70-square-metre apartment in Barcelona, architects Anna and Eugeni Bach came up with the idea of creating an elevated work space with a hanging desk. They took advantage of the high ceilings and located the kitchen inside a custom-made wooden box with a loft space on top that could be used as a study or occasional guest room. 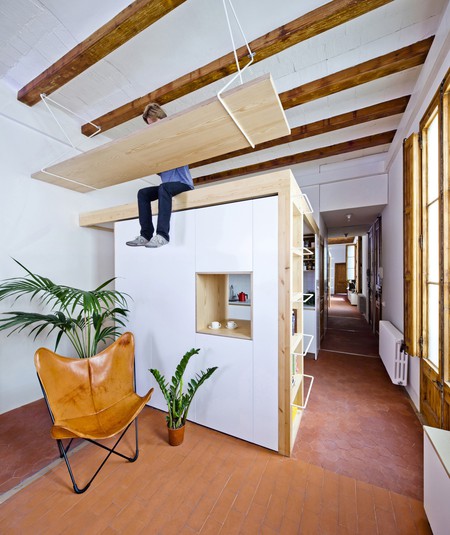 This intriguing ‘house-inside-a-house’ concept was built for Dutch architect Rolf Bruggink and his girlfriend in collaboration with Niek Wagemans, a specialist in creative upcycling projects. Here, the sculptural volume is built from a combination of salvaged radiators and reclaimed trusses, purlins and floor beams. Most of the living functions are contained within this freestanding box, topped by a bedroom with a walk-in wardrobe and shower room, plus a quirky cantilevered desk/bath arrangement. 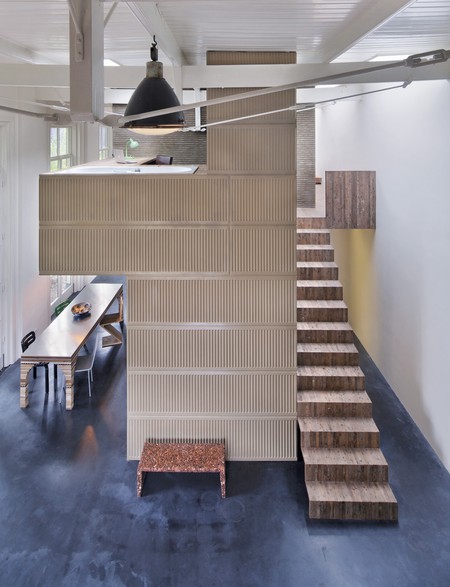 Designed by Berlin-based architect Michael Hilgers, this fold-out workstation is created for making practical use out of ‘leftover’ spaces that aren’t suitable for standard furniture. The Flatmate desk can transform long hallways into home offices and despite its compact size, it can fit a fully equipped networked office, complete with storage space hidden behind two side flaps and in the back of the unit, plus room for integrated chargers and lighting. 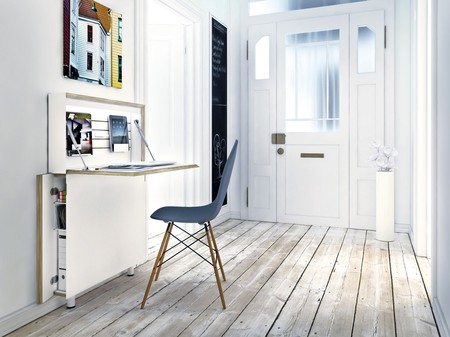 The duo behind Copenhagen-based studio Spacon & X created this solution for their own home to suit the family’s evolving needs. As parents of two, Nikoline Dyrup Carlsen and Svend Jacob Pedersen didn’t want to have to move house, so instead they transformed their home from static rooms to ‘flexible activity-based zones’. Their new home office hub is slotted between the living room and the children’s area. Concealed within the wall is the ‘cabinet-office’, which includes a fold-down table and shelving with ‘plug-in stools’. 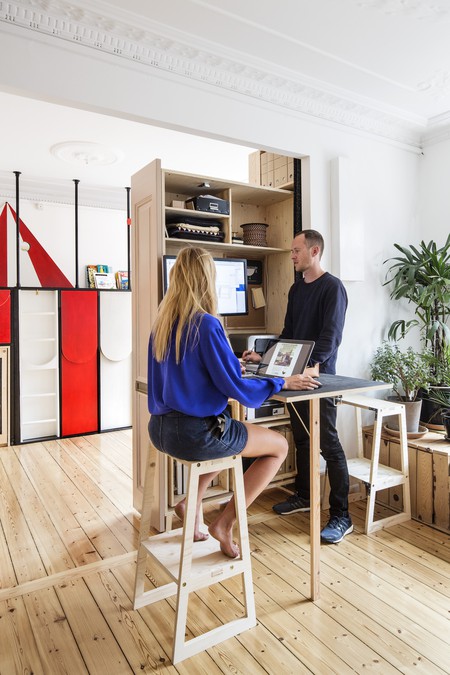 A London-based artist wanted his studio flat to be a space where he could predominantly work, meditate and practise yoga, away from the hustle and bustle of the city. The brief was to recreate ‘the tranquil and melancholic beauty of a remote monastery in Belgium’; the result was a seemingly empty and pared-back 26-square-metre flat, void of decoration or embellishment. The practical elements of the home are all hidden away – at one end the bedroom and wardrobe is concealed behind mirrored panelled doors, while at the opposite end the kitchen and bathroom zones are masked behind wooden cabinetry. The focus is a simple desk set against a bare concrete wall, with no distractions. 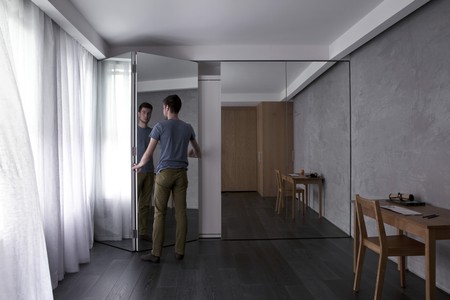 This home in Japan was designed to be a flexible and ever-evolving living space for a family, with four box-like volumes containing two floors that surround a double-height central space that serves as the ‘family hub’. The boxes on the lower levels contain the kitchen, bathroom, work room and also a bedroom, while the upper floors have been intentionally left unfilled so the family can adapt them over time according to their needs, whether that’s to accommodate a new hobby, working needs or growing wardrobes. 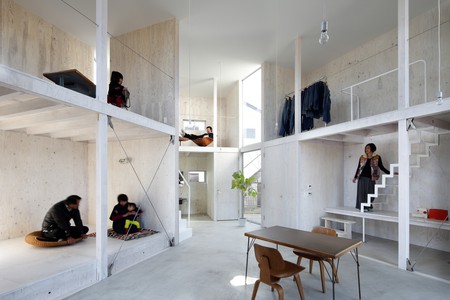 HomeWork: Designing Solutions for Working from Home by Anna Yudina is published by Thames & Hudson – purchase a copy here. 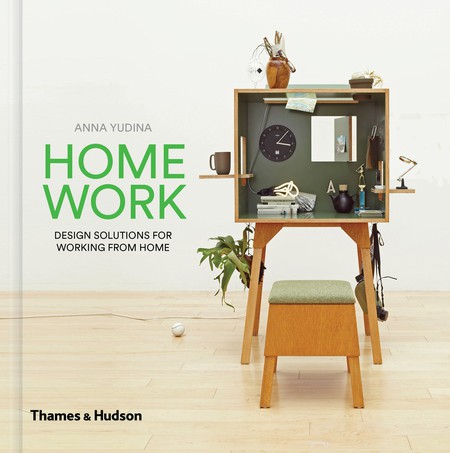