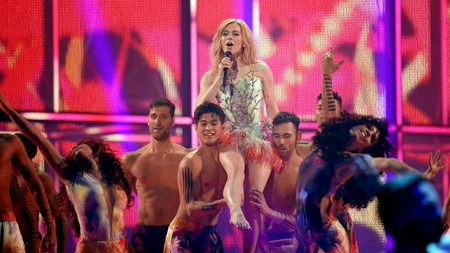 Eurovision, the longest running international TV-contest that brings Europe, and even Australia, together every spring is spreading the message of unity and peace across borders, tracing back to 1956 when the first contest was held in Switzerland. Over the years, Europe has witnessed many great performances, and we decided to put together a list featuring some of the best winning songs and performances of the Eurovision Song Contest.

🇧🇻 Fairytale by Alexander Rybank, a young Norwegian violinist and singer, scored the highest-ever points since the inception of the contest, winning the 2009 Eurovision with an astounding 387 points. The song sold gold in Norway and Finland and received a platinum certification in Russia.

🇦🇹 Rise like a Phoenix by Conchita Wurst was the second win for Austria in the competition, since 1966. Conchita’s strong voice and performance earned her 290 points in the 2014 Eurovision contest and rightly so. However, due to the controversy of the artist’s appearances, some more conservative countries were appalled, accusing the contest of promoting ‘degrading moral values.’ They could not be more wrong – after all, Conchita symbolises the true essence of the competition: openness and togetherness, not to mention her talent (she was by far the strongest singer in the contest in 2014).

🇬🇧 Here’s a classic 70s hit for the list. UK entered the contest in 1976 with a song by Brotherhood of Man; Save Your Kisses for Me, that prior to the 1976 Eurovision was already a big hit in its home country! After the contest, the song not only topped the charts in the UK but also became a hit in the rest of Europe, the US, and even occupied high rankings in Australia.

🇫🇮 Heavy metal band Lordi, consisting of five monstrous musicians, is Finland‘s only winning performance at the Eurovision song contest, up to date. Lordi won in 2006 with 292 points, scoring highest of all winners until 2009, when Aleksander Rybank took over with his impressive 387 points. Over 70,000 people gathered in Helsinki to sing along with the group in a huge public karaoke to celebrate the band’s victory in the contest.

🇸🇪 Euphoria by Loreen scored an impressive 372 points in 2012, becoming the second highest scoring song in the history of the Eurovision song contest. The song was praised by critics and it was certified with platinum nine times – the track became Sweden’s best selling Eurovision song of all time, even beating ABBA’s Waterloo.

🇮🇪 Rock’n’Roll Kids, performed by Paul Harrington and Charlie McGettigan, was the first male duo ever entering the contest and brought Ireland its sixth victory in the Eurovision Song Contest. Scoring 226 points, it was the first song to have received over 200 points in the history of the Eurovision. The performance was unique due to the fact that there was no orchestral accompaniment involved – the lyrics were supported by the singers themselves; Harrington playing piano while McGettigan was on guitar.

🇩🇰 Considered as one of the best entries to the competition in recent years, Emmelie De Forest’s Only Teardrops was already a hit in Denmark before the contest and when it was re-released afterwards, it reached #1 on the Danish charts. At the competition, the song won with an impressive 281 points.

🇨🇭 The winning song in the 1988 Eurovision contest; Ne Partez Pas Sans Moi performed by Celine Dion achieved victory by the narrowest of margins: it scored one point higher than the UK’s entry ‘Go‘ performed by Scott Fitzgerald. Dion’s performance remains well respected, and partly due to her international fame the song is considered one of the most prominent winning performances of all time.

🇸🇪 Sweden‘s entry to the 1974 Eurovision contest introduced ABBA, who brought the victory home with their worldwide hit Waterloo. The song became one of the best selling singles of all times, also charting in the US top ten list. In 2005, when the Eurovision Song Contest was celebrating its 50th anniversary, Waterloo was chosen as the best song to enter the contest since its inception. What do you think?

🇨🇵 Singer Isabelle Aubret entered the contest in 1962 representing France by performing Un Premier Amour and won the seventh Eurovision with her charismatic voice. The contest looked and sounded slightly different in its earlier years but one fact is for certain – the winner certainly knew how to interpret the song, had stage charisma and most of all, knew how to sing. Lets hope this fact, as well as allowing talent to outshine favoritism and good looks, will stay constant in the future Eurovision Song Contests. Happy Eurovision watching everyone!