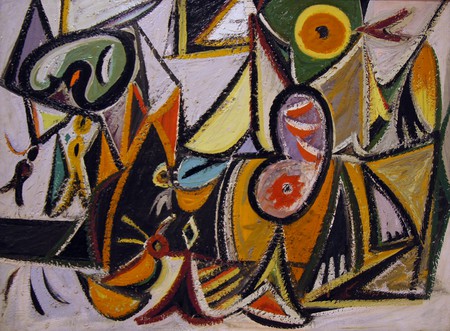 Sometimes it is easier to tell a lie than to tell the truth. Perhaps this is what the young Armenian Vostanik Manoug Adoian thought when he arrived in the United States in 1920. He promptly changed his name to ‘Arshile Gorky,’ declared he was a Russian noble that had studied art in France under Wassily Kandinsky, and claimed he was the cousin of the Russian author Maxim Gorky. 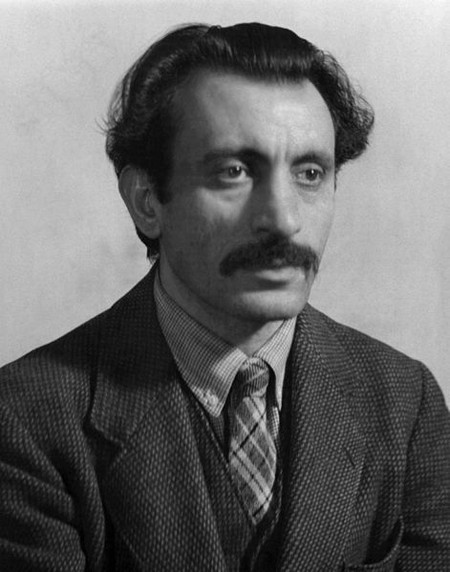 Arshile Gorky’s identity would go on to haunt and inspire him until his tragic suicide in 1948. At the beginning of the 20th century, the Ottomans began an ethnic cleansing campaign, persecuting the Armenian community in what would later be known as the Armenian Genocide. Gorky and his family were forced to flee to Russia and then to the United States for safety. The escape was especially difficult for Gorky, who witnessed his mother’s death shortly after the family made it to Russia. When he finally arrived in the United States, Gorky fabricated a story so grand that he was soon teaching art in New York, making his way into circles on the cusp of a new artistic movement. Although he was eager to conceal his past, it was only by delving deep into his subconscious and personal history that he was able to become one of America’s most influential artists.

Gorky was a gifted draftsman with a genius ability to emulate the artwork of other artists; he copied the works of Cézanne and Picasso, mastering their techniques and styles. Although very talented, his work was overshadowed by the heavy influence of the very artists he admired, and it was not until he became acquainted with the Surrealists that he began to find his own vocabulary of style and expression. The Surrealist concepts of unconscious and improvisation helped Gorky unmask himself, as he began to reveal the traumatic events in his life through his work. In Artist and His Mother (ca 1926-1930), Gorky transitions from more superficial work to focus on a very personal and intimate subject. The painting, based on a photograph of Gorky and his mother, shows two figures staring out at the viewer. The expressions on the two faces are arresting; the mother’s proud eyes are strong and redemptive. In a departure from the photograph, Gorky chose to paint his mother’s apron, pristine white, rendering her an angelic and pure holy figure. While her face is in focus, her hands and the bottom of her apron melt into the painting; thick brushstrokes transform his mother into a memory, a brief and immaterial moment. The dark jackets and sweaters they wear in the photograph are replaced with orange and brown, giving the boy movement and highlighting the flatness of the mother and her lifeless presence.

In 1944, Gorky met the Surrealist theorist and poet André Breton; the new relationship elated Gorky, who admired the Surrealists and the European school. Breton was impressed by Gorky’s work — especially The Liver is the Cock’s Comb, which he called ‘the most important picture done in America.’ Gorky had also been urged by another contemporary Surrealist artist, Roberto Matta, to water down his paint and allow his works to be a product of spontaneity, mirroring a Surrealist belief. Consequentially, Gorky’s work became more fluid. The shapes were organic, and his inspiration turned toward nature, as he studied the fields, plants, and animals in his country home in Connecticut. Gorky’s work also became profoundly personal; lyrical abstractions from his childhood and other dark, abstract portraits reflected the hardships of his life. Agony, painted a year before Gorky hanged himself, is a canvas of pure devastation. Dark red and varying tones of brown and loosely sketched yellow, tongue-like shapes depict a fire taking over the canvas. At the time, Gorky’s studio had been destroyed in a fire, and he lost much of his work, which had finally became a reflection of who he really was: light and nostalgic at times, while also dark and tragic. 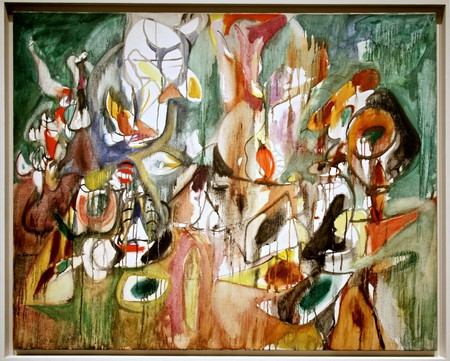 Gorky’s works moved from dream-like, Surrealist streams of consciousness to abstractions full of fluid forms, irregular shapes, bold outlines, and intangible objects, in which a fruit or a fish, say, becomes recognizable before losing its identity and becoming something else. Breton’s encouragement helped Gorky forge a new path, influenced by the surrealists; despite this, Gorky’s work was irrevocably part of the American school. The Surrealists’ ethos of automatism was at odds with Gorky’s calculating and precise style. His driven personality, professionalism, and references likened him to the American Abstract Expressionists, such as Pollack and De Kooning, and permitted Gorky’s work to move beyond what the Surrealists were doing. Through Surrealism, Gorky found the language he needed to create his own distinct style — a juncture between emotion and abstraction. Despite the tragic end of his promising career, Gorky left behind a body of work that influenced his contemporaries and later Abstract Expressionists for years to come.