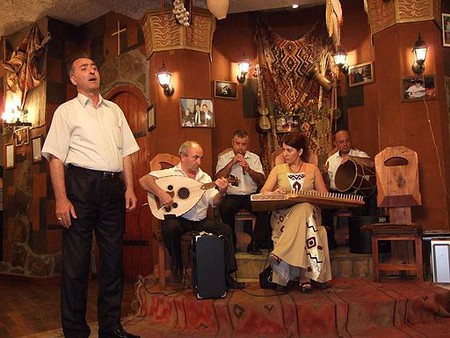 Armenia may be home to around only around three million people, but its culture and history is incredibly rich. This applies no less to its folk music tradition. Not only can it be traced back to ancient times, but in being located on the border between Europe and Asia, Armenian music also draws on features from both continents.

Armenian music takes some characteristics from Middle Eastern music traditions. It is essentially monophonic (i.e. a single melodic line, without accompaniment at different pitches) and with a strong tonal center (a specific pitch which the music revolves around). However, its rhythm, melody, and dynamics reveal the influence of Western music as well. 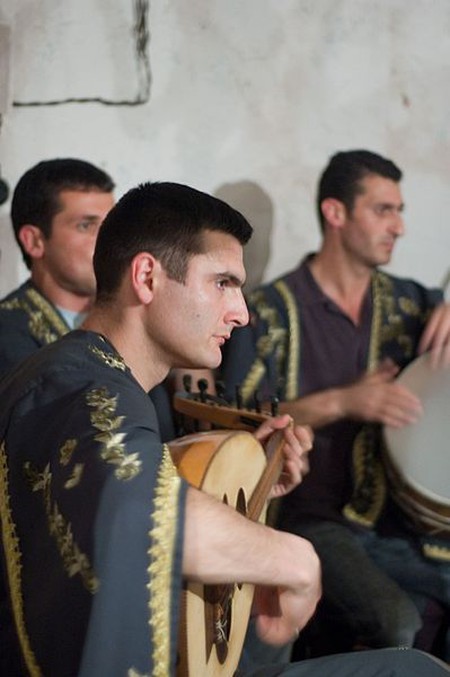 Although the above characteristics are common across Armenian folk music, it is important to recognize that the tradition is diverse. The Armenian language comprises around 60 distinctive dialects, each with its own folk music style. There are also a number of different genres (described in greater detail below), some of which are only performed in appropriate situations, whereas other songs are not connected with any particular social setting.

While Armenian work songs are used to stimulate work by encouraging the workmen and working animals, they can also express personal emotions. This is especially the case with the horovelner (ploughing songs). Not only do these songs relate to the physical labour, but they use items from nature as their subject (such as wheat). They also incorporate elements of prayer and thanksgiving, complaints and expressions of satisfaction, and refer to ancient customs and beliefs. Workers improvise the text and music of horovelner, which consists of a main refrain and many exclamations of ‘ho!’

Bullock-cart songs are another important type of work song. These are performed while wheat is transported from the field to the threshing floor, and a board pulled by oxen threshes the wheat. As the task does not require such great effort from the laborer, the texts of bullock-cart songs are normally affectionate words addressed to the animals and are comprised of lyrical, flowing melodies. 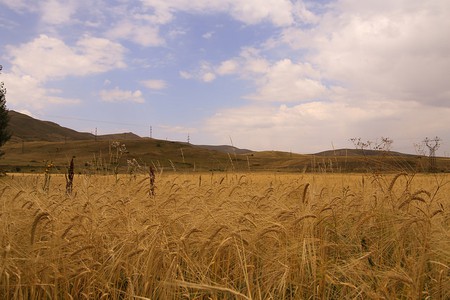 The Armenian wedding cycle consists of over 100 items, which must be sung at particular moments during the ceremony. Therefore, a diverse range of poetic and musical themes exist, from deep sorrow to witty jokes, and from humble prayer to playful humor. The songs also variously allude to the different participants: the bride, groom, parents, friends, and anyone else present at the wedding.

Not only are its topics diverse, but there are also numerous local variants of wedding songs. How the songs are performed varies too: they may be sung by a male of female soloist, in a group chorus, or as a dialogue between a soloist and chorus.

Love songs constitute a significant part of the Armenian folk tradition. They are particularly remarkable for the concentration of emotions and depth of content. The theme of love is always partnered with the subject of nature. The melodies have a flowing, singing style, with a narrow range, usually between a fourth and seventh.

Parerger, or dance songs, are the most prevalent type of folk music in Armenia and the variety within this genre is extensive. They can be heavy or light, serene or energetic, joking or heroic, lyrical or virile. There is a limitless diversity of rhythmic and metrical patterns, and Parerger are often performed in setting like a feasts or during traditional rituals. 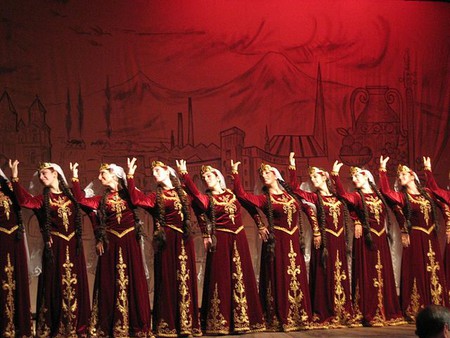 Evidence from as early as the fifth century indicate the existence of the gusanner. These were professional musicians, who enjoyed special importance and prestige in Armenian society by recounting national myths and epics in word and song. The type of gusanner performer was varied, including tellers of tales, singers, instrumentalists, dancers, comedians, and tragic actors. Gusanners performed at feasts for pure entertainment, but also participated in weddings, funeral, and other rituals.

Although the gusanner tradition has close ties to folk music, it nevertheless adopted its own professional characteristics. Masters would teach their style of performing to their pupils, meaning the art of the gusanner gradually acquired its own tradition. The melody in gusanner music is defined by the ‘angularity’ in its melody and a heroic spirit.

In the 17th century, the art of gusanner rejoined its folk music roots, bringing in its replacement, ashughner. Unsurprisingly, the latter has many similarities with its predecessor: they both had the same social role and professional status. The form, content and some performance features are different, however. The ashughner display more overt tension, pathos and emotion. Furthermore, social, political and moralizing themes are more prominent: songs may praise human virtues or reproach negative aspects of society and the actions of individuals. They may also contain historical stories, jokes and riddles. One of the most famous ashugher was Sayat’-Nova (1717-1795), who was the court musician to the Persian Nadir Shah and later to the Georgian ruler Iraklii II.

Armenia came under Soviet rule in 1920, drastically changing the lives of the Armenian people. This was mirrored by its folk music. Some modernized, some new ones were created, whilst those most connected with the old ways of life died out. Radio, television, and the recording industry also began to have a significant influence on Armenian music. A further important development was that ashugh songs began to be published – before they had only been passed on orally. The topic of these songs in the 20th century also became simpler, with more optimistic views on life.