Dram: A Guide to the Armenian Currency

When traveling to a new country with an official currency different from the one used in your home country, it might be a bit daunting. The dram is the official currency used throughout Armenia, and therefore you’ll be paying in drams for attractions, sights, and public transportation. This guide is packed with all the necessary information about drams you’ll need to know while planning a visit here.

After the collapse of the Soviet Union, the Central Bank of Armenia was given the sole right to issue the national currency. Back then, several efforts were made to keep a common currency, the Russian ruble, among the rest of the CIS states. Armenia was no exception and joined the ruble zone. However, it soon became evident that having a common currency in the unstable economic and political situation of the post-Soviet states would be quite difficult.

In 1993, the ruble zone collapsed with the monetary reform of Russia, and those countries were ‘forced’ to start producing their own currencies. Armenia was one of the last countries to introduce the Armenian dram to its nation on November 22, 1993. The word “dram” translates from Greek into English as “money.” The earliest dram currency, in the form of silver coins, was used in the country between 1199 and 1375.

Since gaining independence, Armenia has managed to cut inflation, privatize most of the small and medium-sized enterprises, and stabilize the currency where one USD is worth 483 AMD. However, the unemployment rate still remains high, despite great economic growth. During the global economic crisis, the value of the AMD was artificially kept high out of a fear of inflation and concern about separating the powerful importers of beverages, oil, flour, and sugar. 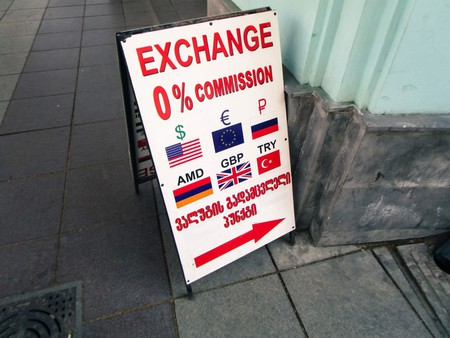 All the banknotes feature famous Armenian artists, scientists, and historical and cultural monuments. For instance, the 20,000 banknote has a portrait of Matiros Saryan, a famous Armenian painter and his work Armenian Landscape on its reverse side. A 5,000 note has a picture of Hovhannes Tumanyan, a great poet, while the reverse side features an image of Lori Marz where the poet was born. 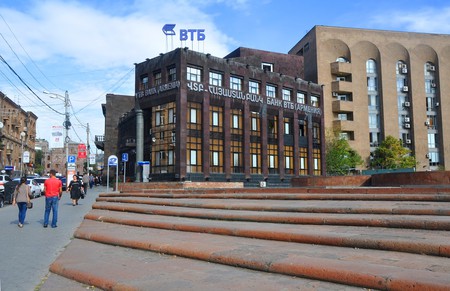 In 1998, new series of banknotes were issued to replace the old ones. The design of the new banknotes was created by foreign experts from England and Germany. The banknote of 50,000 drams was issued in 2001 honoring the 1700th anniversary of Christianity being the official religion of the country. And in 2009, Armenia issued a banknote of 100,000 depicting the King Abgar V, the highest denominated banknote in circulation.

You can’t do much with only 100 AMD except buy a one-way ticket on public transportation, a small bread pie, cookies, or a bottle of water at a grocery shop.

With 500 banknotes, you can buy a domestic beer in a grocery store or a bottle of water in a coffee shop.

When in Armenia, it is a good idea to carry a lot of 1,000-dram banknotes as they are super handy. A single banknote will get you a regular Americano at a café and you’ll even get some change back. When adding a couple hundred drams to your 1,000-dram note, you’ll be able to buy a snack on the go or a cheap breakfast. 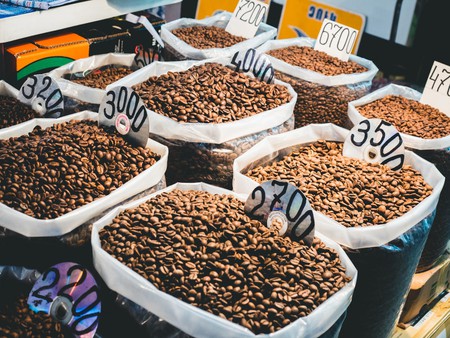 For a nice, inexpensive meal at a restaurant, you’ll need around 3,000 AMD per person. But if you’ll be shopping at the grocery store, a 5,000-dram banknote will get you tons of items including bread, milk, eggs, half a kilo of local cheese, and bits of various vegetables. Additionally, it can get you a bunk bed in a cheap hostel in Yerevan.

1. As the Armenian dram is the official currency of Armenia, you’ll be required to pay only in drams. There’s no problem exchanging money to the national currency across the country. Big commercial centers, hotels, cafés, and restaurants do take credit cards, but it’s more convenient to carry cash.

2. Be aware that some of the dining venues do include a service fee in the final bill. The average tip ranges between 5-7%. In case the service fee is included, you are not obliged to tip on top of that; however, if that is not the case, it’s recommended that you tip an average of 10% of the total bill.

3. Make sure to keep your banknotes clean and untorn. If your larger bills have a small tear somewhere, the chances are it will be rejected. Therefore, be attentive when getting change and ask the vendor to replace it if you notice tears or defects.