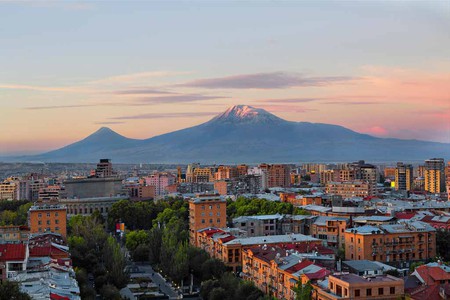 Yerevan at the sunrise with the two peaks of the Mt Ararat in the background, Armenia. | (c)Nick Fraser / Alamy Stock Photo

The Armenian language belongs to an Indo-European language group. The official language of Armenia was developed in 405 AD by Mesrop Mashtots and has its own writing system and alphabet. If you’re keen on learning some of its beautiful words, here’s our guide to help you out.

The Armenian language is spoken by nearly 6.7 million people. The majority of these speakers live in Armenia, but the rest live in other countries, including Georgia and Russia. Iran has more than 100,000 Armenian speakers and a small minority of speakers live in Turkey too.

Armenian is a separate branch of the Indo-European languages; it didn’t derive from other languages, and there aren’t any languages that were derived from it. The language has a long literary history, and the fifth century Bible is the oldest surviving text.

It’s believed that the vocabulary of the Armenian language has been influenced by Iranian languages, especially Parthian, and to a minor degree by Greek, Syriac and Persian. Before formulating an Armenian alphabet, inhabitants used Greek and Aramaic characters. When the country adopted Christianity as its official religion, the need to create a native language to translate the Bible appeared.

The original alphabet, created by Mesrop Mashtots, had 36 letters in the beginning. Mashtots traveled all across the country to collect sounds of the Armenian speech. During the Middle Ages, two new characters were added to the alphabet to write words adopted from foreign languages.

Over the centuries, the language experienced phonological and grammatical changes. Today, there are at least three different types of Armenian languages in use: Grabar, or Classical Armenian, is a scholarly version used by the Church; Western Armenian is spoken by Armenian diaspora abroad (primarily in America, Europe, and the Middle East); and Eastern Armenian is the official language of the Republic of Armenia. It must be noted that there’s little difference in Western and Eastern Armenian, thus they are quite understandable to each person speaking either of the dialects.

Besides Armenia, the Eastern Armenian language is also spoken in Iran and Russia by Armenians living in those territories. The Russian language is broadly known in Armenia, while English is gaining more influence, alongside German and French.

In the twentieth century, the two modern dialects, Western and Eastern, removed all of their Turkish words because of the Armenian Genocide that took place in 1915.

The Armenian language matches other Indo-European languages in its structure, although it has unique features and grammar compared with other languages of the Caucasus. The language is rich in sequences of consonants. Both classical and modern Armenian dialects have a complex structure of noun declensions, but no gender. 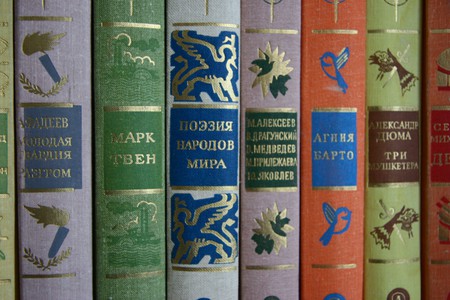 In modern Armenian, the use of secondary verbs to show tense has generally enhanced the inflected verbs of Classical Armenian. It must be noted that negative verbs are conjugated differently compared to positive ones in many tenses.

In terms of grammar, the early forms of Armenian language had much in common with classical Latin and Greek, but the modern language has endured many changes, joining some analytic features.

Classical Armenian has no gender, not even in its pronouns; however, there is a feminine suffix (-uhi). So for instance, usutsich (teacher) becomes usutschuhi (female teacher). Grammatically, the suffix does not affect the sentence.