The Most Beautiful Buildings in Andorra

Sant Serní de Llorts, Ordino, Andorra | © Luis Miguel Bugallo Sánchez (Lmbuga) / WikiCommons
Andorra is more known for its skiing and its shopping than its architecture. However, the country is home to a number of stunning buildings, particularly its stone Romanesque churches. From those churches to historic noble homes and modern-futuristic spas, here’s Culture Trip’s most beautiful buildings in Andorra.

Church
Iglesia Santa Coloma, Andorra | © Simonjoan / WikiCommons
The Church of Santa Coloma is located in the parish of the same name, close to the capital of Andorra La Vella. One of the most beautiful examples of Andorran Romanesque churches, it has a cylindrical bell tower—which is unique in Andorra—and dates all the way back to the 10th century. Inside is just as stunning, home to a few 12th-century Romanesque murals, as well as a wooden statue of Our Lady of Remedies and an 18th-century Baroque altar.
More Info
Open In Google Maps
Carrer Major, Santa Coloma, Andorra la Vella, AD500, Andorra
View menu
Visit website
Visit Facebook page
Send an Email
Give us feedback

Building, Church
Església de Sant Esteve, Andorra | ©MARIA ROSA FERRE / Wikimedia Commons
The Church of Sant Esteve is another of Andorra’s charming churches. Located in the historic quarter of the capital of Andorra la Vella, it stands next to the Andorran parliament building. Rather than the cylindrical bell tower like Santa Coloma, it has a regular rectangular tower. The church was originally built in the 12th century and is also Romanesque in style, although it was renovated and added to later in the 20th century to make it larger.
More Info
Open In Google Maps
Andorra la Vella, Andorra la Vella, AD500, Andorra
View menu
Visit website
Visit Facebook page
Send an Email
Give us feedback

Museum, Memorial, Building
Carrer Major Casa d'Areny Plandolit, Ordino, Andorra | © Cdani / WikiCommons
Andorra’s only version of a stately home, the Casa d’Areny Plandolit, is now a museum and can be found in the village of Ordino. The house was built in the 12th century, and like many of the buildings here is made of stone. It also features intricate wrought iron balconies. The house belonged to the family of Don Guillem d’Areny-Plandolit, a prominent nobleman in Andorran history. Inside the museum, visitors will be able to see luxury pieces of 19th and 20th century objects once belonging to the family.
More Info
Open In Google Maps
Ordino, Ordino, AD300, Andorra
+376839760
View menu
Visit website
Visit Facebook page
Send an Email
Give us feedback

Church
Sant Serní de Llorts, Ordino, Andorra | © Luis Miguel Bugallo Sánchez (Lmbuga) / WikiCommons
Andorra is home to many beautiful churches, but none quite as charming as Sant Serní de Llorts, located north of Ordino. A tiny stone church with two gable bells and an arched wooden door, it’s surrounded by cute chalet-like houses with window boxes filled with flowers. It is not actually known when the church was built, but it is Romanesque in style and features a Baroque altarpiece.
More Info
Open In Google Maps
Llorts, Ordino, AD300, Andorra
View menu
Visit website
Visit Facebook page
Send an Email
Give us feedback

Located in the capital of Andorra La Vella is Casa de la Vall, a noble house built in 1508, and was also the seat of the oldest and most continuous parliament in Europe. Originally it was built by Antoni Busquets, a local priest, who lived here with his family. From 1701 to 2011, it was the home of the Andorran parliament, so it is filled with assembly rooms, meeting rooms, a grand entrance hall and even a criminal court. Outside the house is a sculpture of a dancing couple by the sculptor Josep Viladomat. 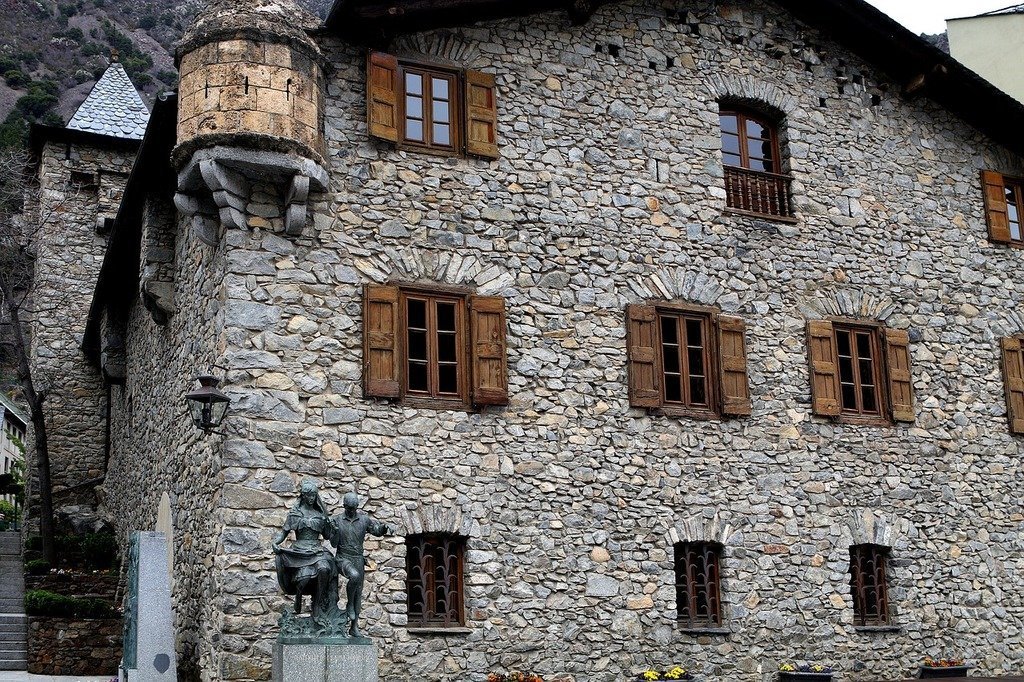 Building, Spa
Caldea spa complex, Andorra | © Pixabay
This building is a little controversial—you either love it or hate it. One of the most modern and futuristic-looking buildings in the whole of Andorra, it looks somewhat like a shiny rocket or a cathedral made from mirrors. The building houses the Caldea Spa—Europe’s largest mountain spa with over 323,000 square feet (30,000m2) of whirlpools, saunas, hydrotherapy bubbles, and relaxation areas.
More Info
Open In Google Maps
10 Parc de la Mola, Escaldes-Engordany, Escaldes-Engordany, AD700, Andorra
+376800999
View menu
Visit website
Visit Facebook page
Send an Email
Give us feedback