An Art Lover's Guide to Tirana, Albania in 24 Hours 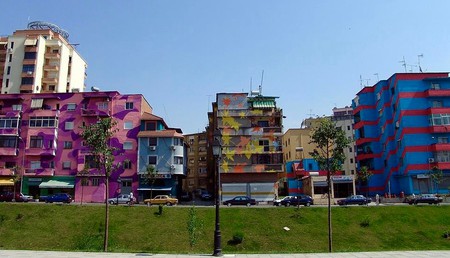 In recent years, Tirana has been identified by many national and international publications as one of the coolest cities of the Balkan Peninsula and Europe. Tirana boasts an ever-growing art scene thanks to its museums and art galleries, but also to its street art scene promoted by the local administration. If you get a chance, visit as many museums as possible in Tirana. For those art-lovers who are planning to visit Albania’s capital city, here is our guide to the town’s art scene.

You can’t say you’ve been to Tirana without having visited the majestic BunkArt. This museum, built inside the largest anti-nuclear bunker of Albania, is located in the outskirts of Tirana, near Dajti Mountain. To reach it, you need to grab a taxi and, once there, you’ll admire a gorgeous, and a bit creepy, bunker turned into one of the coolest museums of Europe. The rooms show the modern history of Albania, from the Italian occupation to the Communist era. The central theater also occasionally hosts jazz concerts and art performances.

The little brother of BunkArt, BunkArt2, is another cool museum built inside a coveted bunker, but located in the heart of Tirana, near Skanderbeg Square, so it’s easily reachable by walking. BunkArt2 is entirely dedicated to the victims of the Communist regime.

Albania is one of the oldest countries of Europe, inhabited since prehistoric times and subsequently colonized by Greeks, Romans, and Ottomans. To learn something about the ancient and rich history of the land of the eagles, there is nothing better than planning a tour inside the National Historical Museum of Albania. You’ll see it in Skanderbeg Square, with its gorgeous façade, entirely made with mosaics, that represents the historical times of the country. For less than 4€ you will visit the largest museum of Albania, so keep it in mind.

The largest museum in Albania holds many of the country's archaeological treasures and a replica of Skanderbeg's massive sword (how he held it, rode his horse and fought at the same time is a mystery). The excellent collection is almost entirely signed in English and takes you chronologically from ancient Illyria to the postcommunist era. One highlight of the museum is a terrific exhibition of icons by Onufri, a renowned 16th-century Albanian master of colour. . . . . #albania #intirana #nationahistoricalmuseum #museum #albaniatourism #city #photo #noefectneeded #amazingplaces #amazing #ScanderbegSquare #tirana

Komiteti is a roomy café located behind the majestic Pyramid of Tirana. Well, to be honest it is more than just a café, it is a museum, too: here you’ll find plenty of old Communist-era artifacts, such as radios, carpets, clothes, and so on. It is the perfect place for a pit stop to refuel with one of the over twenty varieties of raki, before continuing your tour.

Located inside the garden of the former residence of the dictator Enver Hoxha, Lincoln Garden Café is a beautiful art-related bar in which to spend some of your time while visiting Tirana. It hosts several music concerts, performances, and film screenings during the week. A plus here is the garden, where children can play while parents relax.

For those who are interested in cultural events, art criticism, and supporting new local artists, the best place to go is Tulla Center. This amazing cultural center is entirely dedicated to promote art and culture in Tirana so almost every night of the week there is a cultural event that worth a look. If you enjoy grabbing a cocktail, chatting with locals, and enjoying musical performances, Tulla is the kind of place for you.

A must-see in the Albanian capital city for art-fans is Tirana Ekspres, a non-profit organization created by artists, activists, environmentalists. Tirana Ekspres is perhaps the most exciting art space in Albania, and if you are coming to Tirana you cannot miss it. During the day you can sip a coffee, talk with local artists, and admire the art exhibitions located inside. In the evenings there are several events, such as performances, concerts, shows, film screenings, and party nights.

Albin. Mike. Adam. Hi Albania! The Albanians who didn't have enough of @adamevald can hear him playing with the chamber orchestra tonight at the opening of my exhibition Corner Space at Tirana Ekspres. I've heard we will be drinking sparkling wine. #mashabender #mbwt15 #aewt15 #tirana #albania #mb_travels

Tirana is one of the most colorful cities of Europe, and once in town you’ll understand why: every building or street has plenty of colored graffiti. Street art fans will be very pleased to know that, for a number of years now, there are several initiatives in Tirana to promote local and international artists and designers. The best way to admire all the graffiti is to stroll down streets such as Rruga Myslym Shiri and Bulevard Bajram Curri and to explore the Blloku district.

This enchanting café-restaurant is one of the best places to go in Tirana for a gorgeous meal. It is one of the most artsy spaces in town, which hosts cultural events, from literary meetings and readings, to movie screenings and live music. Here, you can find a great selection of books and read them while having a coffee. E7E is a great place to have dinner and meet locals of all ages.

This traditional restaurant, one of the few in Tirana where you can eat typical Albanian cuisine, houses several traditional Albanian arts and artifacts from past times. Dining at Oda is like a mystical experience that you can have only here: the pleasant atmosphere, excellent menu, and old furnishings are totally worth a stop.