The Rise and Fall of Panamanian Dictator Noriega 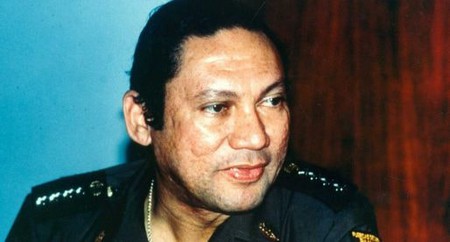 Manuel Antonio Noriega, the former dictator of Panama, has died this year at the age of 83. During his twenty-year rule, Noriega played a both sides of the coin with the United States, shifting from cooperating with American intelligence agencies to selling political secrets to the enemies of the US. It was his ties with drug cartels that ultimately led to his removal and to the life-long imprisonment that has just come to an end. Read more to discover the story behind the rise and fall of the most infamous Panamanian ruler of all time.

The rise of Noriega

Due to its strategic geographical position, at the crossroads of two continents and two oceans, Panama has always been a disputed location. Controlled by the Spanish, the French, the Colombians and ultimately by the US, the country gained independence in 1903, but it was only under the rule of General Omar Torrijos that the US influence started waning.

General Torrijos was the first leader in Panama to successfully defy US rule. Under his command, a treaty was signed and President Jimmy Carter agreed to ceding the Canal back to Panama. But his sudden death in a plane crash in 1981 left the country unstable. That’s when young Colonel Manuel Antonio Noriega, a loyal aide to General Torrijos, saw a golden opportunity to begin his rise to power. Within months, Noriega maneuvered an operation to seize the National Guard and promote himself as the ruler of Panama. Craving power and wealth, he manipulated elections in favour of his chosen candidates and strengthened his ties with drug cartels whilst maintaining good relations with the US. 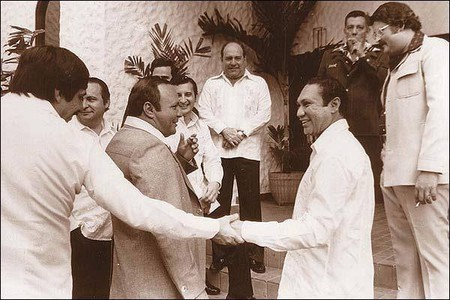 As a former head of Panama’s secret police and a CIA operative, Manuel Noriega was renowned for his duplicitous behaviour to US officials. However, with the rise of leftist movements in Central America, the US had an interest in preserving their influence in Panama, so their turned a blind eye to Noriega’s treacherous nature. After all, the spinning relationship between Noriega and the US went hand in hand with the awkward ties that had existed between the two countries since the building of the Canal. It was not until Noriega’s increasingly belligerent behaviour came to a breaking point that the US finally lashed back. 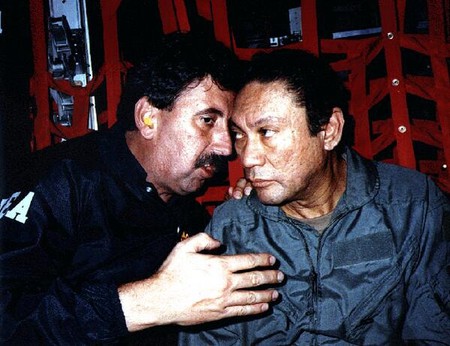 The US military invasion

The US had begun questioning Noriega’s ties to Colombian drug traffickers as well as his use of torture and murder against the opposition, though the last straw came when an unarmed American soldier was killed by Panamanian troops on the 16th December 1989. President George Bush ordered the invasion of Panama, and on the 20th December, at midnight, 27,000 US troops were deployed in the capital and took over the city overnight. The unprepared Panamanian forces were overwhelmed and Noriega took shelter in the Vatican Embassy until he finally surrendered on the 3rd of January, when he was flown to jail in Florida. 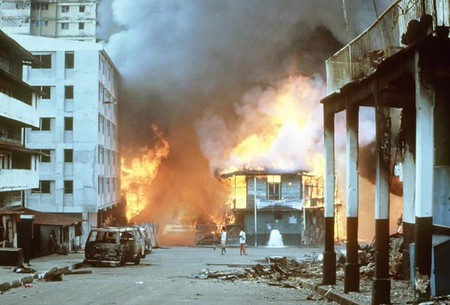 El Chorrillo on fire, the morning after the US Invasion on the 20th December 1989 | © Courtesy of Panama Vieja Escuela

General Noriega remains an inglorious character in Panamanian history. Thought to have led the lavish life of a drug-lord, made up of women, luxurious mansions and cocaine parties, he is also remembered as a cruel dictator who opened the doors of the country to drug-trafficking and money laundering. After serving 40 years in a Florida prison, he was moved to a detention center in Panama, and only came out to undergo a final surgery that did not save his life. His passing closes a controversial chapter in Panamanian history. 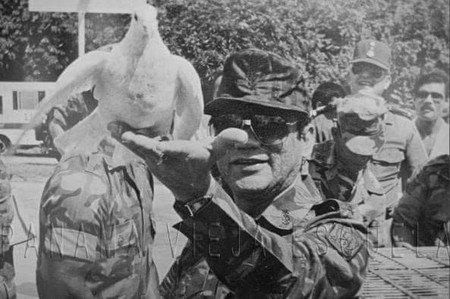 Manuel Antonio Noriega releasing a dove at an event on Plaza 5 de Mayo to symbolise world peace, 1986 | © Courtesy of Panama Vieja Escuela
Give us feedback