11 Special Species You Can Spot in Bocas del Toro, Panama 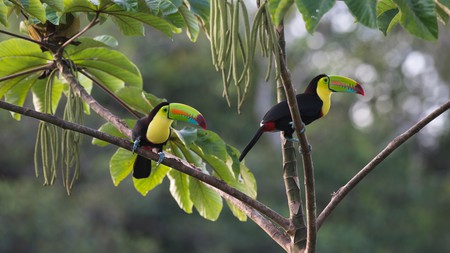 The islands of Bocas del Toro, off Panama’s Caribbean coast, are home to over a dozen different ecosystems including lowland tropical rainforest and coral reefs. The wildlife wonderland boasts a host of different species to look out for on a trip to the archipelago.

Bocas del Toro’s unique range of habitats gives it an incredible biodiversity – the area boasts frogs in all the colors of the rainbow, the largest sea turtle species in the world and even a mammal that is found nowhere else in the world. These are just some of the species to spot in this beautiful region of Panama.

The pygmy three-toed sloth wasn’t recognized as a separate species until as recently as 2001. Endemic to Bocas del Toro’s Isla Escudo de Veraguas, an isolated mangrove island, the slow-moving mammal is almost identical to its cousin, the more commonly seen brown three-toed sloth, but is about 20% smaller. The island is now home to the world’s entire population of pygmy three-toed sloths, which are critically endangered. Life on a remote mangrove island, which is interlaced with channels of water, has inspired the evolution of these sloths to become good swimmers. 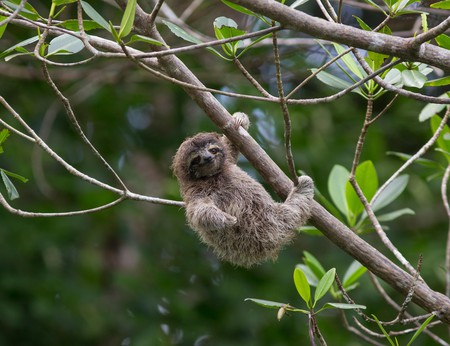 The Panamanian night monkey is an elusive little primate that, as the name implies, is usually only active at night. During the day, family groups sleep in their ‘roosting tree.’ With the help of a highly trained nature guide, it’s possible to find these adorable monkeys sleeping while on a walk in the rainforests around Bocas del Toro. If you’re interested in guided nature tours, reach out to the reputable tour company Kawi Voyage. 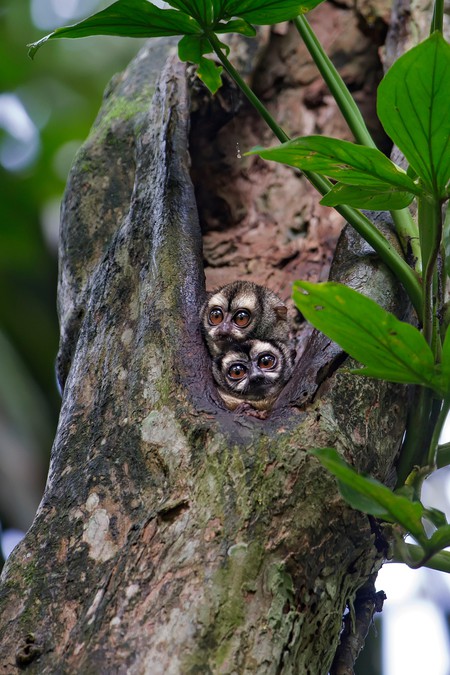 Unlike their North American cousin, Central American woolly opossums are incredibly cute. These medium-sized tropical marsupials roam the forests at night, looking for fruit, insects and nectar to eat. As such, they play an essential role in dispersing seeds through the forests.

Like kangaroos, baby woolly opossums are called joeys and depend on their mother’s protective pouch during their developmental stage of life. And like sloths, their favorite tree is the cecropia. 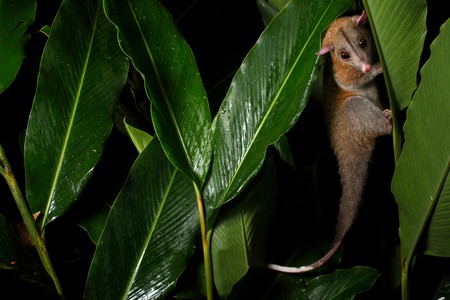 The strawberry poison frog, or the oophaga pumilio to give it its scientific name, is found throughout the rainforests on the Caribbean side of Panama. The typical coloration of this tiny toxic frog is a bright red body with dark blue legs. However, in Bocas del Toro, this frog species displays a spectacular array of color variations that differ from island to island.

If you keep your eyes peeled, you can spot these vibrant amphibians in leaf litter and around the buttresses of trees. 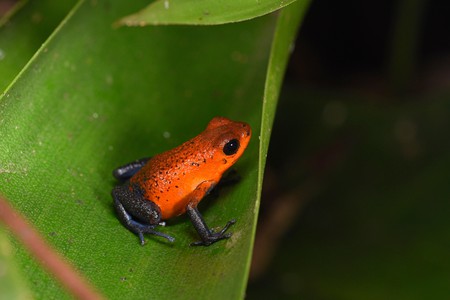 The red-headed dwarf gecko is a tiny, harmless lizard that sometimes likes to live in human houses. They are beautifully colored and are nocturnal feeders. Unlike the common house gecko, which is more muted in colour, the red-headed dwarf gecko has a striking, electric blue body that is speckled with tiny black spots. Like all geckos, they are attracted to lights at night, since the lights attract the bugs they eat. 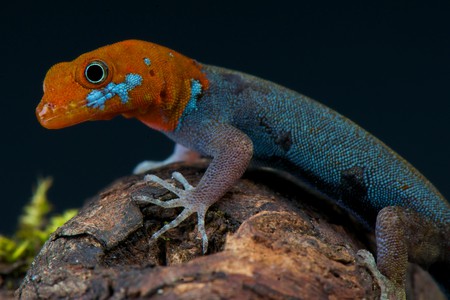 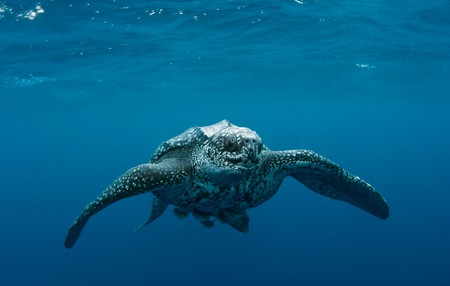 If there is a birdsong that is synonymous with Bocas del Toro, it is the Montezuma Oropendola’s song. This very vocal and charismatic bird has a wide range of calls, but once you’ve heard it sing, you’ll never mistake it for any other bird. They can be seen hopping from branch to branch high up in the trees, where they rarely sit still for long – snapping a photo of one of these colorful birds certainly poses a challenge.

Oropendolas also craft curious nests that look like a pendulum or cornucopia. In some places, you can see dozens of oropendola nests hanging from a single palm tree. 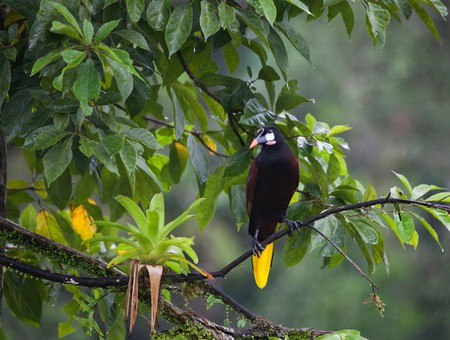 Keel-billed toucans are very shy and rarely sit still for very long. But when they do make an appearance, these gorgeous birds are certainly a showstopper. Their large rainbow-colored beaks are mainly used to eat fruit, but occasionally they also snack on insects, lizards and tree frogs.

At one point in time, keel-billed toucans were widely caught and circulated through the international pet trade, but it was gradually discovered that they have rather poor dispositions and make bad pets. While they are not currently endangered, as their rainforest habitat continues to be destroyed in Central and South America, they sadly could find themselves on the list soon. 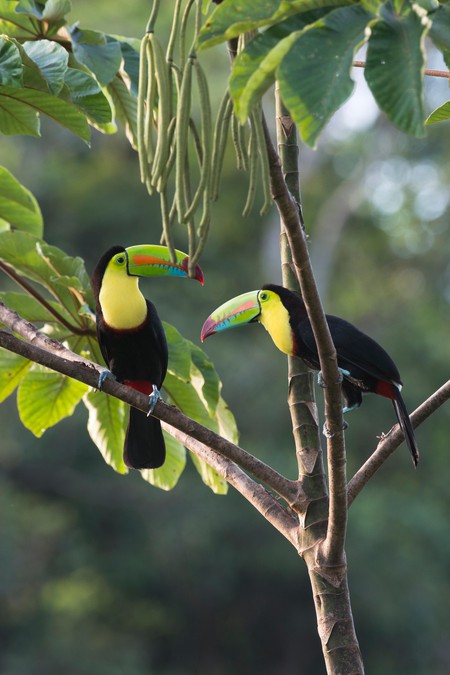 Spectacled caimans are relatively small in comparison to their relatives, the American crocodile, which can also be found in Panama. These crocodilians, whose name comes from the ridge between their eyes, prefer calm freshwater but can tolerate some level of salinity. One place in particular where you will almost always see at least one caiman is on the walk to Bocas del Toro’s well-known Red Frog beach. 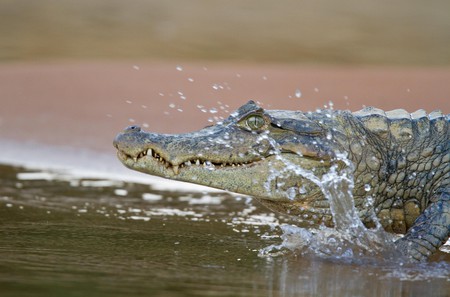 In the birder’s world, the three-wattled bellbird is a highly prized bird to spot. This brown and white bird has three distinct wattles hanging down from its face. It also has a bizarre three-part call that ends in a bonk-like sound.

The three-wattled bellbirds are seasonal visitors of Bocas del Toro, but you certainly won’t be able to ignore their song if you are lucky enough to hear it. The last part of the three-part call is believed to be one of the loudest bird calls on the planet. 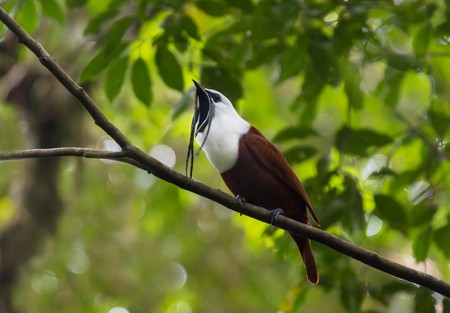 Despite living in the ocean, long snout seahorses are actually poor swimmers. The seahorses, which can grow to be 7in (18cm) long and camouflage perfectly with their environment, spend most of their time with their tails wrapped around a mangrove root, sponge, piece of seagrass or soft coral.

Seahorses tend to mate for life, and males carry and care for the eggs. When diving in Bocas del Toro, keep a sharp eye out for these unusual sea creatures.