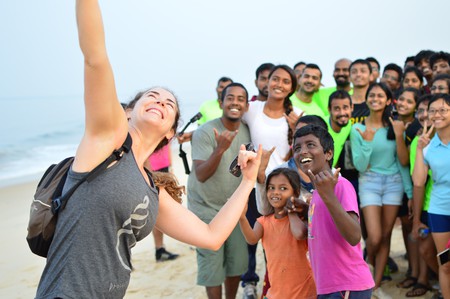 When Claire MacFarlane was raped, she thought her life was over. 18 years later, she’s now taking steps to transform her tragedy into a positive and inspiring movement. Liana Mellotte joins Claire in Nicaragua during her epic round-the-world journey, set to span four years across 184 countries – on foot.

It’s 6.30am. For the first time in days, thick clouds form a welcome respite from the burning Nicaraguan sun above – cooling the dawn air to a ‘mild’ 32 degrees celsius (89 degrees fahrenheit). Black volcanic sand stretches languidly before us, whilst the Pacific Ocean bubbles noisily at our feet. We are standing on Las Penitas beach, a perfect paradise less than 30 minutes from Leon, northwestern Nicaragua. We are embarking on a 16km (10 mile) run as part of a monumental global mission – the likes of which the world has never seen before.

This mission is the brainchild of South African-born Claire MacFarlane, aka the ultimate solo traveller.

Claire is an inspirational friend, adventurer and rape survivor. Back in 1999, she was brutally strangled, raped and left for dead in a Paris side street. She was studying abroad at the time, in what had been her first trip away from home. The incident went on to have a profound impact on Claire’s life. 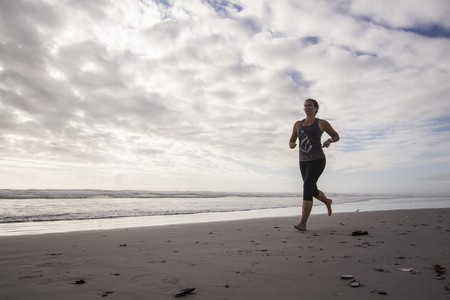 10 years later, Claire had all but given up on her attacker ever being identified. That is, until a nationwide project in France (focused on digitising historical DNA) hit on a match. However, even with the perpetrator in sight, she had to wait 16 long years for justice.

In that time, Claire set out on a mission: to change the dialogue surrounding sexual violence, and to give a voice to rape survivors. Thus, Footsteps To Inspire was born – an astonishing global campaign of peaceful action, which is taking her round the world not once, but four times.

Claire is running 16km (10 miles) on a beach in every coastal country in the world over four years. That’s 184 countries, covering over 3,000km (1,864 miles). Through her campaign, she intends to break taboos surrounding gender-based violence, and promote a message of healing; showing survivors that flourishing in the face of trauma is possible. 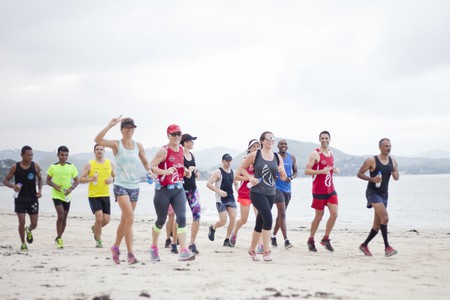 Running 184 long-distance courses is challenging enough, so why beaches? As a nomad, Claire feels most at home by the sea. During her childhood (spent between South Africa and Australia), her late father taught her how to, as she puts it, “read the ocean and to swim wild”. The sea is Claire’s safe space, and has been a powerful and constant character in the story of her survival.

Going alone is a travel trend set to rise sharply in the near future. According to a recent survey, 69% of UK respondents said their plan was to travel solo this year. Claire hopes that both women and men will prepare themselves for the risks of sexual violence while abroad.

“It is standard for a solo-traveller to research a great travel insurance policy and an airline ticket that offers best value for money,” says Claire. “However, it is less common for travellers to read about the legislation and rights in their destinations. If the worst happens, they can [at least] access specialist medical, legal and psychological help.”

Every time Claire steps into a new country, she connects with local NGOs and organisations that support victims of sexual abuse, leaving them 50% of the money she raises as a donation.

I met Claire in Nicaragua, the 20th country on her journey. Nestled between violence-inflicted Honduras in the north, and touristy Costa Rica to the south, Nicaragua is a troubled country.

Statistics around gender-based violence here (particularly child sexual abuse) are staggering and stark. In a 2010 report, Amnesty International called the rape of girls in Nicaragua ‘endemic’. It has the highest rates of teenage pregnancy in the world, where one in three girls give birth before turning 18. The majority of these young mothers are rape victims, commonly at the hands of someone known and trusted by their family.

Gender-based violence has become normalised by widespread social attitudes, which condone attacks and stigmatise survivors. It is ingrained in Nicaraguan culture, especially more remote regions far from the urban sprawl.

Giving a voice to survivors

Claire welcomes silenced survivors to open up about their trauma. Giving survivors a voice is at the core of her mission, and in each new country she visits, it is not uncommon to see locals orbit her to share their stories.