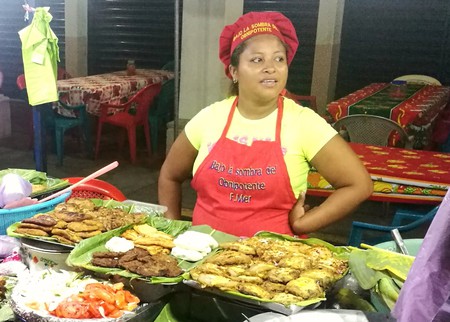 Nicaraguans love their food, and when it comes to eating out the first choice for most people is their neighbourhood fritanga, where beef, pork, or chicken are barbecued to perfection and served up with a hefty side of rice and beans, some crispy plantains, and a cold drink in a plastic bag. A source of great local pride, fritangas are an integral part of Nicaragua’s gastronomic identity. There’s even a popular song called ‘Amor Fritanguero’ (Fritanga Love). So what makes a fritanga so different from other street food stalls that it deserves a special name?

From simple roadside grills with one or two options of the day, to sit-down restaurants where the food is barbecued outside, fritangas come in many forms. But as street-eats go, they are Nicaragua’s favourite fast-food joints, the neighbourhood solution to feeding the family when there’s no time – or inclination – to cook at home. 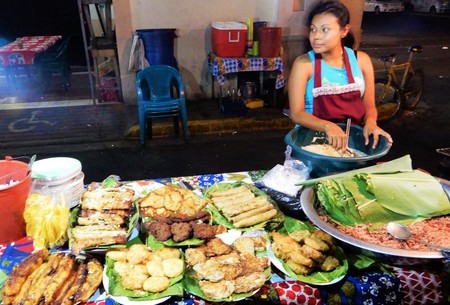 Although concrete archaeological evidence is lacking, the tradition of cooking food over smoky wooden embers in Central America probably stretches right back to the days when indigenous people arrived here around 15,000 to 20,000 years ago.

When Christopher Columbus made his first, world-changing voyage to the Americas in 1492, he observed Arawak-speaking Taino people from the island of Hispaniola (divided between Haiti and the Dominica Republic today) cooking fish over embers on frames made of fresh green branches, so they wouldn’t burn in the flames.

The Arawak word for these wooden frames has come down to us as barbacoa via the Spanish chronicler Gonzalo Fernández de Oviedo, who in 1526 employed it in relation to present-day Panama.

In Nicaragua, the earliest account of a “borbecu” comes from the English pirate and explorer William Dampier, who in his book A New Voyage Round the World (1697) uses the word when describing his time among the Miskito people of the Atlantic coast.

Fritanga is derived from the Spanish frito, meaning fried. Only in Nicaragua is it applied to a place where food is cooked, although the exact origins of the word are lost in the wood smoke of time. Some local historians believe the tradition of the fritanga as a recognised style of eatery goes back to the 1931 earthquake that devastated Managua, when street-side barbecues sprung up in the aftermath.

Asados Doña Tania in the middle class suburb of Los Robles in Managua, is one of the best-loved fritangas in the capital. The owner, Tania Meza, started selling carne asada from the front of her house in 1997 after her husband left her with two children to care for.

“In those days, the fritanga was very simple,” explains Doña Tania. “They took a plantain leaf and piled up the gallo pinto, then the strips of meat, the slaw on top and then the tajadas. You could it eat with your fingers, but I wanted to give my clients a plate of food. So I changed the way it was served, added more options, added more tables in my patio, more seats, music, and now it is very popular.” 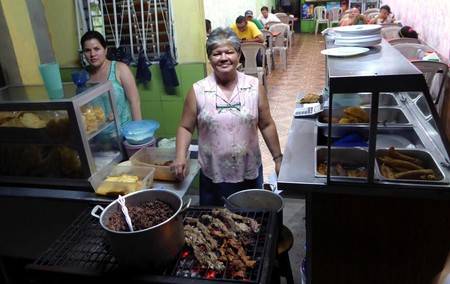 At Koma Riko, a fritanga in the northern city of Estelí, Doña Imelda offers a range of fried and barbecued food for customers who want to sit and eat in her restaurant or take something home to feed the family.

“The classic, classic fritanga is with beef or pork, but barbecued chicken is typical nowadays as well,” she says. “In fact, there are lots of things you can add. A fritanga is like a buffet with lots of choices. We try to make each one as delicious as possible so we always have a long line of customers up the street.”

Most fritangas have their wares out on display and you can choose what you want, with the price for each item added onto your final bill.

Typical fritanga options include moronga (blood sausage), chorizo (spicy sausage), tortepapa, a battered potato cake filled with cheese, tacos, a deep fried tortilla tube with beef in the middle, and enchiladas, tortillas that are stuffed with rice and beef, folded in half, battered and deep fried. They are then reheated on the barbecue before being served.

Big portions are often the hook that attracts customers, but some fritangas take that concept to an extreme. Carne Asada Lissethe in Managua became an overnight social media sensation when it started selling a family-sized platter that comes with 2lbs of beef and a 4lb slab of fried cheese. Lissethe Flores, the owner, personally attends every customer and makes the cheese herself, but it’s the size of the cheese that brings in the crowds who line up around the block every evening.

Street fritangas sell drinks, known as refrescos or just frescos, made with cacao (cocoa powder), cebada (barley), tamarind juice with ground chia, arroz con piña (rice and pineapple), and juices like pitahaya (dragon fruit). These are traditionally served in a plastic bag that is tied around the top with a straw in it. Fiddle with the knot at the top at your peril. 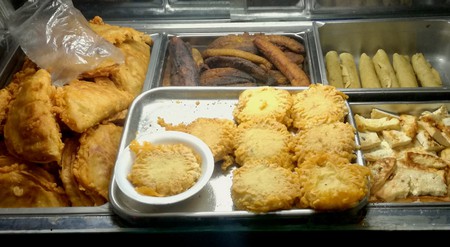 Jincho is a Managua-based design collective that works playfully with words, phrases, and images that touch on the Nicaraguan sense of identity to create funky urban apparel. Graphic designer Jemax Luna says that the whole concept of the fritanga fits perfectly with Jincho’s concept of taking popular elements of everyday Nicaraguan life and giving them the cool treatment they deserve.

“We all love fritanga. It’s 100 percent Nicaraguan. Just saying the word conjures up the smell of woodsmoke and barbecuing meat, and all the things that go with that: the fresco served in a plastic bag with a straw, the funny chats you have with friends and neighbours as you wait for the food to arrive,” says Luna.

“We made a T-shirt that just listed the main ingredients you would order at a classic fritanga and people loved it. They have all the same food elements in El Salvador, Guatemala, Honduras and Costa Rica, but when you see that unique combination together on the T-shirt the recognition is immediate. It’s ours. It’s fritanga. It’s Nica,” he says. 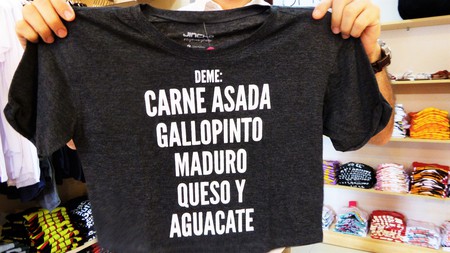 Fritanga gets its own song

What could be cooler than a song extolling the tasty delights of barbecued food? Nicaragua’s most popular contemporary musical outfit, La Cuneta Son Machin, have made a career out of creating catchy cumbias with a tinkly-marimba sound and a punk-rock energy that tap into Nicaragua’s rich traditions of folk music. Their song Amor Fritanguero (Fritanga Love), is a joyous ode to carne asada, queso frito, and gallo pinto from a love-hungry admirer.