Top 10 Things To Do And See In Guatemala City 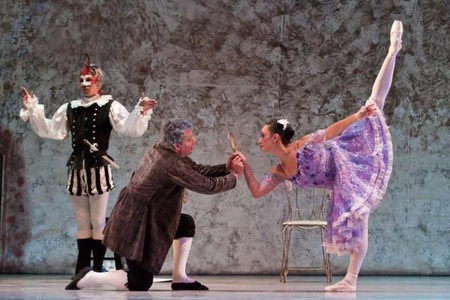 A re-appropriated military fortress turned into a cultural wonderland in 1987, in the shape of the volcanoes which surround it, Teatro Nacional lies in the heart of the city and contains five complexes, an amazing view of the city and Civic Center, excellent acoustics and everything under the sun from plays to ballets to concerts. In the vision of its architect, Efrain Recions, the masterpiece is inspired by Mayan culture and offers an outdoor, chamber and main theater, as well as a Museum of Old Fort of San José which accommodates a small military museum home to a replica of the first fortified Mayan city of Mesoamerica: Punta de Chiminios. The National School of Art and The National Cultural Radio also operate from the confines of this complex. 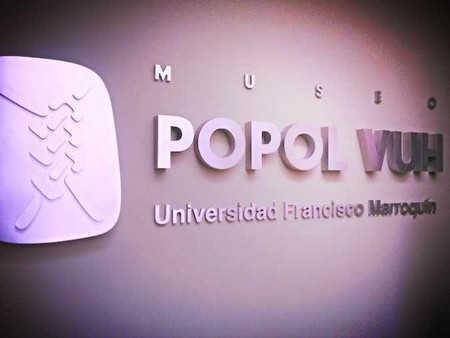 A beautiful modern museum encompassing a series of thematic rooms that document stages of Guatemalan culture and history, Museo Popol Vuh exists within the Fransisco Marroquin University. Its small size still manages to house intricate displays showcasing pre-Hispanic figurines, incense burners, carved wooden masks, burial urns, traditional textiles, and other archaeological Mayan artifacts. The museum also contains colonial paintings, gilded wood, and silver artifacts that belie the country’s religious history. It sits across from the Ixchel Native Costume Museum, so if you plan to have a culture packed morning or afternoon, hit both. But before you head over to Ixchel, be sure to check out the painting of the Guatemalan conquest in the downstairs of this cultural gem (which also has well-lit, bilingual displays).

Across from Popol Vuh, Museo Ixchel de Traje Indigena has an incredible collection of Guatemalan textiles and is aptly named after the Mayan Goddess of the moon, women, reproduction, and textiles. The museum exhibits a huge variety of indigenous dress, crafts and photographs of the richness of traditional Mayan culture and highland towns. The museum also has amenities for travelers with disabilities, a children’s section, a café, library, and a shop that supports the weavers from around the country who continue to make native textiles. The museum informs visitors of the history of the clothing, trends and production as well as delineating Mayan and foreign influence on the country’s history. This well-designed museum also features an art gallery downstairs, and guided tours are also available upstairs in English or Spanish.

Located on the north side of Parque Central sits the architectural and historic tribute that is the Presidential Palace. Built between 1936 and 1943, with its intermix of Spanish styles (from Renaissance to neoclassical), Palacio Nacional is in fact the third palace to sit in this location. Commissioned by the infamous dictator General Jorge Ubico, who forced prisoners to build this site, it now stands bereft of its governmental offices as a museum open to the public and a destination of ceremonial events. The stain-glass banquet hall, adorned with stained-glass panels, ironically represents the virtues of good government. Be sure to find the presidential balcony and the Patio de la Paz in the western courtyard, in which a monument of two enormous brass hands signify the signing of the Guatemalan Peace Accords of 1996. If you happen to be there at 11 a.m., the military guard changes the rose held in the hands daily and the previous is tossed to a female spectator. 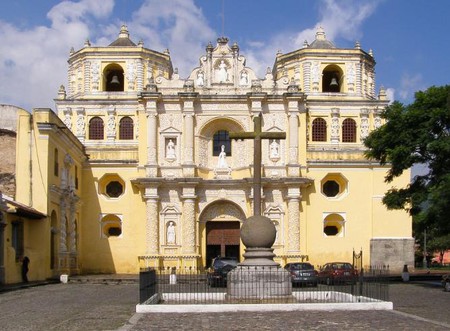 Iglesia La Merced, a lime-based yellow painted church and convent constructed in 1918 in neoclassical style, contains gold-plated Baroque altars from the original church in Antigua, Guatemala. La Merced also features San Judsas Tadeo’s altarpiece with beautifully embossed silver. When Justo Rufino Barrios nationalized this church it transformed into the headquarters of the National Police; however it was restored in 1999 and now exists as a four room museum with elaborate paintings, religious statues and sculptures, and an organ quoted as the most sonorous in all of Guatemala, all of which date from the 17th and 19th century. A feat of colonial workmanship, this stunning church is a must see.

Also known as the Cathedral of Guatemala City and a landmark of Guatemalan religiosity, The Metropolitan Cathedral is located in the heart of the city. The interior design consists mainly of colonial art from the ancient capital of Santiago de los Caballeros (Antigua) after the city fell to an earthquake. It was rebuilt between 1782 and 1815 in Guatemala, after which the completion of the towers and blue dome took 50 years. The interior mirrors the form of the Latin cross with five naves and two main shrines. Along the central nave sit fourteen paintings by 17th century Mexican artist Pedro Ramirez, along with statues of saints such as Saint Fernando King of Spain and San Louis King of France preserved (along with altars) from the original church in Antigua. The 12 pillars directly in front of the cathedral, double as a tribute to the murders and disappearances of thousands of people during the civil war between 1960-1966.

Home to the country’s largest collection of ancient Maya artifacts, Museo Nacional de Arqueología y Ethnología contains wooden lintels from temples at Tikal and El Zots, jade jewelry and masks, as well as monumental stone sculptures including a throne and animal representations from Preclassical Kaminalijuyú. The archaeology section holds a large-scale model of Tikal, the ethnography section consists of language, consume, dance, mask, and home displays of the indigenous peoples of Guatemala. Outside of the museum there are carved pillars surrounding a beautiful fountain in a covered arcade. It’s in close proximity to the Modern Art and Science museums as well if you’re looking for further culturing, but be sure to get the local discount: the tourist price is a good amount heftier, but pictures are allowed and free (unlike many other Guatemalan museums in the area).

Venture through Parque Minerva (just a quick walk from Parque Central) to catch a glimpse of this gigantic open-air topographical map of Guatemala. It is at a staggering 1:10,000 scale, with exaggerated vertical volcanic peaks and mountaintops to appear dramatically higher and precipitous than they truly are. Constructed in 1905 under Fransisco Vela, the map was fully repainted and restored in 1999 and viewing towers were constructed to provide panoramic observation. Although a small fee is requested, the public claims it’s worth the price especially to play “spot Belize”, as the map still represents it as a part of the country. A great spot for kids, or a good place to start your Guatemalan adventure, the relief map is a fascinating site to help give you the lay of the land, and especially recommended for those interested in cartography of any sort.

This bohemian hang out offers a vibrant and creative local scene with great places to meet up with live music of every type (rock, classical, jazz, and more) from Tuesday to Saturday starting at 9 p.m. With Che, Marley, Lennon, Van Gogh, and Neruda covering the walls, go for poetry readings, films, forums and more. What’s more, entry is usually free from Tuesday to Thursday, however a charge occurs on Friday and Saturday nights (around Q25-Q60) when food and drinks are served. For a similar vibe, take a short walk to Pasaje Rubio, a popular and varied pedestrian zone and an old French-style arcade (build in 1926). It caters to every personal and music taste, and brims with jewelry shops, old libraries and El Portalito, the acclaimed hangout of Noble Prize-winning writer Miguel Ángel Asturias as well as Che Guevara, Fidel Castro, and Pablo Neruda.

The super modern Biblioteca Nacional contrasts with the colonial architecture that can be seen on the other side of the plaza, and for which the city is famous. Efrain Recion (a muralist, sculptor, engineer, and architect famous for building The National Theater of Guatemala) built the library on the historic site of the Palacio de los Capitanes Generales. It houses abstract concrete reliefs and façade work as well as containing over 150,000 volumes of books and newspapers.