Looking to celebrate in the most unconventional way? Head to El Salvador, where the residents of the small town of Nejapa hold their annual festival, Bolas de Fuego, meaning ‘balls of fire’. 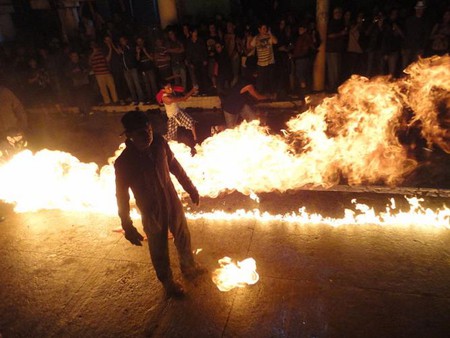 The celebration of traditions in the way of a unique festival is not unknown to modern society. Many flock to Spain to take part in the running of the bulls at the Pamplona Encierro, or there’s La Tomatina, a food fight festival resulting in what one would call a whole lot of homemade tomato sauce. There’s also the likes of England’s annual Cooper’s Hill Cheese-Rolling and Wake, which involves a race against the cheese. El Salvador takes the cake with its bizarre and unusual ritual of throwing palm-sized fireballs of kerosene at the opposing team.

The festival takes place on the same day every year — August 31 — and residents gather around to commemorate the eruption of a volcano in 1922 that forced all of the residents of the town to flee. To represent the disaster, locals throw ‘fire balls’ at one another.

Though this dangerous, yet planned, fire fight has taken place for over a decade now without any rules or restrictions, few serious injuries have been reported. The festival has even been given a religious slant by the church, who claim that the volcanic eruption was the embodiment of the local Christian saint, Saint Jeronimo, who was driving the devil from the town with fireballs.

Should this festival be allowed to continue despite the obvious risks involved? Where should authorities draw the line between upholding tradition and potentially antisocial behavior? Is it irresponsible of the church to endorse such reckless behavior in a country where religion appears to be hardwired into its citizens’ consciousness? While these questions remain unanswered, the citizens of small town Nejapa will continue to hold their not-so-traditional custom of fireball-throwing in remembrance of the volcano that once changed their world.