Where Does Rio Celeste Get Its Magical Blue Color From?

The opaque and glowing turquoise water of Rio Celeste is the most beautiful natural phenomenon in Costa Rica; but photographers are often accused of digitally altering the evidence. The color of the water is like something straight out of a fairy tale or a dream. There have been many ancient myths and hypotheses that attempt to explain where Rio Celeste gets its magical blue color from, but only in recent times has the mystery finally been solved.

Rio Celeste is located in the Tenorio Volcano National Park in the province of Alajuela. In the past, visitors were allowed to swim in the river, but it is now prohibited within the park for safety reasons. While you may not be able to take a dip here, seeing this spectacular and surreal blue river is an absolute must when visiting this part of the country. The hike through primary and secondary rainforest alone is worth the effort. On this hike you will have the opportunity to see monkeys, sloths, and tropical birds along with ancient trees and lush vegetation. As you hike deeper into the rainforest, you will come across the two rivers that converge to form the Rio Celeste. The Rio Buena Vista and Quebrada Agria meet and mix to create the famous mystical blue water. The further up the river you walk, the deeper the color becomes. 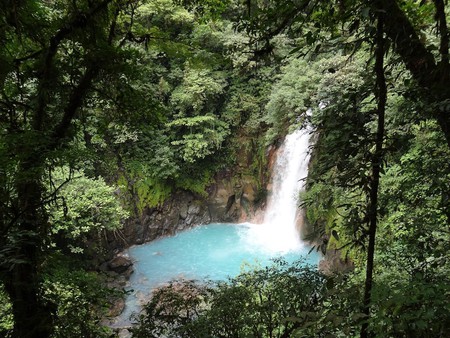 There is a myth that originated from the indigenous tribes of the area prior to the Spanish conquest of Costa Rica. The indigenous people believed that there were other-worldly entities who influenced the forest and those who resided there. The story of how Rio Celeste got its magnificent color is simple and sweet. It was believe that the gods painted the sky blue and used the river to wash their paintbrushes. The river was then dyed sky-blue by the discarded paint. 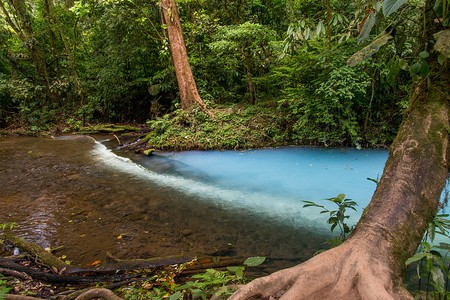 Prior to a comprehensive analysis of the Rio Celeste by the University of Costa Rica, many believed that the water of Rio Celeste was fluorescent blue due to the presence of certain bacteria and volcanic minerals. Some thought that the presence of copper, or the combination of calcium carbonate and sulfur, was responsible for the chemical reaction that made the water neon blue. Turns out, there is no copper in the river, and it is actually not a chemical reaction that causes the other-worldly blue tint.

The Rio Buena Vista (‘Good View River’) and the Quebrada Agria (‘Sour Creek’) are both transparent rivers, but at the point of convergence, which is called El Teñidero (‘The Dyer’), the water appears opaque and florescent neon blue. For 9 miles (14 kilometers), the Rio Celeste appears this magical and mystifying blue. The University of Costa Rica did extensive tests and research to solve the mystery as to why the water appears this color. What they found out was that it is actually an optical illusion. When they took samples of the Rio Celeste, the water appeared transparent in the test tubes. They also discovered that the water contained aluminosilicate (aluminum mixed with silicon and oxygen) and that the rocks on the bottom of Rio Celeste were covered in this white mineral.

According to Dr. Max Chararria Vargas of the University of Costa Rica, the optical illusion is caused by the scattering of sunlight off the suspended aluminosilicate in the river. The sunlight refracts off of this suspended mineral in the water and appears blue to our eyes and to our cameras, which after all were modeled after our eyes. Aluminosilicate was found in the Rio Buena Vista, but the nanoparticles were much smaller than in the Rio Celeste, which is why that river alone doesn’t appear neon blue. Through water testing, it was discovered that the Quebrada Agria is rather acidic. Dr. Vargas said that, “It’s one of those quirks of nature where one of the rivers provides mineral material with one size and the other river provides the acidic environment so that those particles grow.” So, the famous blue river is actually not even really blue; it just appears that way to us.