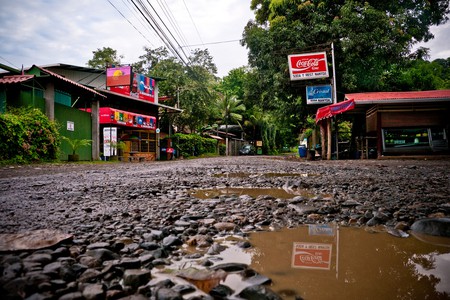 Our Costa Rican selection for our Global Anthology is the following story, excerpted from Equestrian Monuments, translated by Julia Guez and Samantha Zighelboim. It originally appeared, and is published below, courtesy of Public Pool.

1.
The Pacific Ocean at night, seen from inside a bus full of strangers en route to Dominical by way of the Inter-American highway. This is what I’m thinking about now. It’s an ordinary image without a doubt, but (for some reason) it won’t leave me alone. An arbitrary image that comes back every now and again, same as those waves I can almost see unmaking themselves in the sand; branches, seashells, a sandal, corks, and wine cartons brought back like buoys from some other ruin run aground on a new continent. The sea at night, when it’s invisible. When it speaks in tongues, so that we know it’s still there, where sight doesn’t serve us. The night’s sea, lonelier and even less fathomable than the day’s. The sea of simpler songs only the drowned and the fish know to sing.

Earlier the same night, the same sea, the same sand where, without a word, we’d bury our feet up to the ankles, rapt by the fire and the embers dervishing until they disappear with a crackling in the air only half-heard. Not so far away, someone is listening to a radio, listening to news of a world that may as well have been suspended a million light years from what is here now. Others come up close behind us. We overhear a conversation that could have been an extension of our own. And yes, the dogs barking in back yards, all the house lights going out one by one.

2.
Of all nights, why dream of an ex-girlfriend you haven’t heard anything about since graduation on this night in particular? Why, in the dream, is she wearing nothing but a bikini, still looking the way she did during your senior year in high school?

On a Thursday, say, running the same errands you’d run any other day, why are you suddenly willing to give one of your thumbs to go back to the bench you woke up on, in a depressing little park outside of Dominical on New Year’s Day? That morning, destroyed, having to face a standoffish ocean, no money for the bus, bodies all around, lying there still, the deviants you swore you’d love forever, arms around each other’s necks last night, howling. The sea does not explain. The sea does not care to, not to us anyway.

An over-population of fauna on the shore, the vacationing kind. The sea, where it’s deepest, moving to the imperceptible rhythm of fossil fuel. Fishermen, further in, pissing covertly. Seagulls and small aquatic mammals escort boats travelling with only one man aboard. Those who, facing the ocean, close their eyes and make empty promises.

Those who do the same, but don’t close their eyes. Those who stand in ankle-deep water, believing the whole ocean’s knowable from that depth. Those who let themselves be buried in the sand, those who build sandcastles. Those who pitch messageless bottles into the ocean, belching. Those who intuit the ocean is no more than a whole lot of water.

In the family album, an empty space, a rectangle: lost photograph of the boy with a tendency towards obesity, alone on the beach, standing in front of the Pacific, the cleanest morning in 1974. That morning, at a right angle, his figure and the slight shadow he casts over the sand forms a sundial. The sea like hard candy.

Translated by Julia Guez and Samantha Zighelboim. Read our interview with Luis Chaves and his translators here.