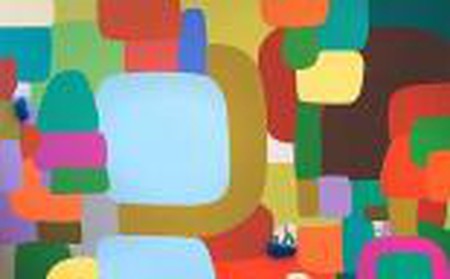 Costa Rica’s capital city is sunny San José, the inspiration and occasional theater for the work of Federico Herrero, a painter who enjoys international success both commercially and critically. Federico Rosa explores the playful yet political quality of his work. 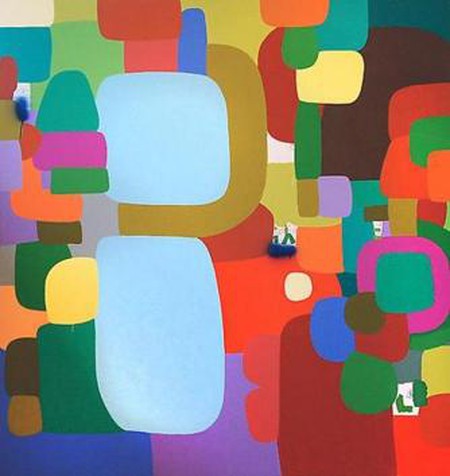 Federico Herrero holds an unpretentious belief in painting as an oficio or trade. For him, painting is an involved and intricate craft as well as an act of communication and expression. His work bears a strong visual relation to the tradition of ‘color field’ painters like Mark Rothko and Morris Louis, artists who made flat color compositions that intended to avoid a symbolic or literal interpretation, focusing instead on the formal aspects of a painting with color as the fulcrum. Herrero is similarly infatuated with color, which is visible in his vibrant works, a unique blend of expression and playfulness that also borrows from the language of street art to create his own brand of socially engaged painting.

Herrero first came to prominence at the 2001 Venice Biennale, where the artist, then only 21, painted what appeared to be a haphazard growth of colors on one of the exhibition walls that, nonetheless, were carefully painted shapes that balanced spontaneity and formal elegance. This wall painting is evocative of street art, with vibrant tropical landscapes and a suggestion of social decay. Herrero deftly managed to incorporate the architectural space in playful ways, adapting it to the final composition.

Herrero’s Untitled Wall Painting (2001), made within the context of the ‘Plateaus of Humankind’ theme of the Biennale, grabbed the attention of many viewers who wondered at the exuberant colors and shapes in an otherwise neglected, derelict area of the premises. This intervention helped raise questions about the role of Central American artists in the wider exhibition and within the larger context of the global art world. For these reasons, Herrero went on to win the Biennale’s coveted Golden Lion Prize that year, a prestigious accolade bestowed on the best young artist of the showing. 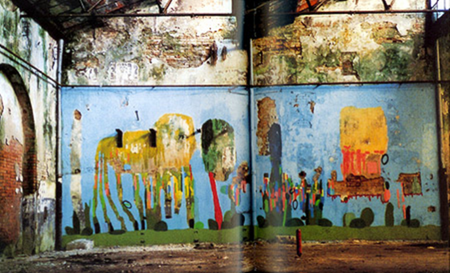 Herrero’s wall paintings place him within the Latin American tradition of muralist painting, especially that of the Mexican Muralists, who were extremely political and very influential across Latin America. Herrero has asserted that he does not see himself as the torchbearer of the muralist tradition, a comment that emphasizes Costa Rica’s neutral stance in political matters – it is currently the only country in the region that does not have an armed force. Herrero has also stated that he feels a stronger connection to graffiti, street signs, and commercial art and design, which directly engage the social space and implement effective ways of attracting and manipulating the attention of viewers. While always producing gallery-friendly canvases, Herrero’s work is, nonetheless, best appreciated when it drifts off the edges, engaging with the space around it, establishing a direct relationship between the social and the aesthetic.

In another street intervention Herrero used the yellow paint normally deployed in street markings to create his own ‘city lines’, often diverging into comical directions and areas of the urban space of San José. Herrero realizes that with simple actions he can reformulate the experience of the city, as well as enter into a dialogue with a larger audience than those awarded by the gallery space, without being overtly political or resorting to proselytism. 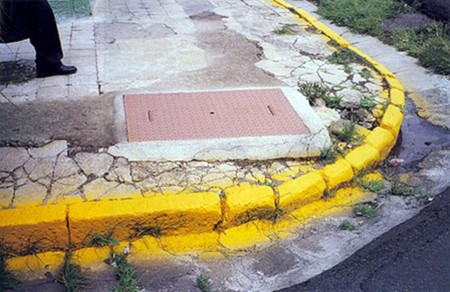 Eschewing traditional painting techniques such as impasto, glazing, shadowing or blending colors, Herrero prefers instead to enhance the purity of his materials, often using acrylic paints with fast drying binders that not only give a purer, brighter hue, but allow the artist to work much faster, only requiring water to thin. The strength and directness of the color and the fast drying time allows the work to be performed with a more applied sense of immediacy. Instead of literally translating the world’s outward appearance, Herrero instead interacts with it physically through paint in the language of colors. 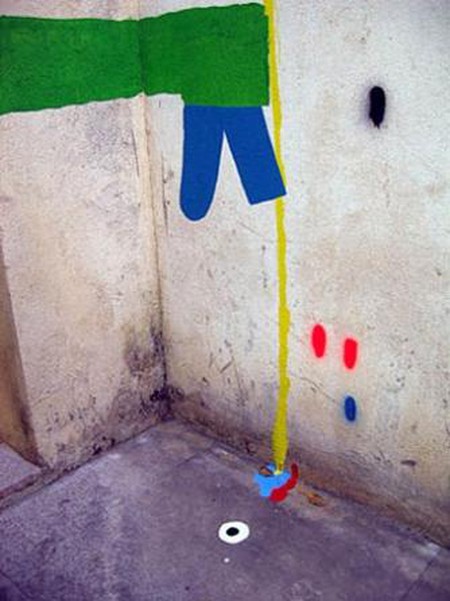 For these reasons, Herrero’s work stands out among Latin-American artists, paradoxically, because it is socially committed art that is not overtly political or aggressive. Color in his paintings is the experience; a phenomenon that helps us directly access our community by interacting with architecture and our shared space. In a region where politics in art is par for the course, Herrero flips this notion on its head by employing a playful yet formal approach that engages the viewer’s social awareness without force feeding political ideas. Any reading or interpretation is valid in Herrero’s work.

For instance, his paintings are non-referential and do not intend to represent anything objectively. Herrero has, however, referred to fictional characters ‘inhabiting’ his compositions. Primary, basic colors painted in vibrant hues yield strange, cartoon-like forms that never merge into a solid shape; spheres with a dot in the center may be interpreted as eyes; areas of color they are slapped on could be seen as heads. Herrero is quite content that we could arrive at bizarre interpretations. In certain canvases, Lilliputian shapes are declared by Herrero to be, unofficially, as it were, Martians. While a statement like this may be taken as humor, it emphasizes the subjective nature of artistic interpretation and refutes an absolutist version of objectivity in any aesthetic discourse.

Herrero’s faithfulness to color and shapes, against conceptual or political references, necessarily forces his images to be able to function without resorting to exegesis in order to make sense. In the words of minimalist color obsessive Frank Stella: ‘what you see is what you see’. With titles like Fuji San or Espejo, Herrero references things that exist in the real world, such as mountains or mirrors, but are deftly rendered irrelevant the longer one interacts with the work. While at first the titles or ‘real world’ references might serve as clues as to what the painting is about, we then realize that making these connections is only part of his game. Seeing the colors for what they are might sound redundant; Herrero makes it essential.