Costa Rica's Migratory Sea Creatures: When, Where, and How to See Them 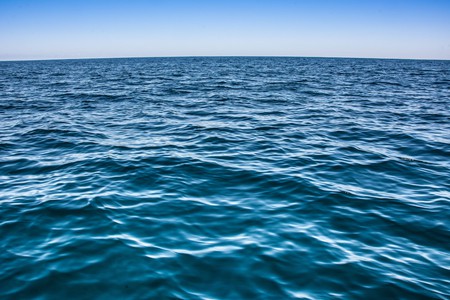 The ocean is full of magic | © apasciuto/Flickr

Costa Rica’s marine territory is nearly ten times bigger than its terrestrial territory. Like the land ecosystems, the marine ecosystems in Costa Rica are hosts to an incredible diversity of both permanent and migratory species. There are marine migrations taking place right under the surface (and sometimes above it) all year long on both sides of Costa Rica. If you are lucky enough, you might be able to observe some of these spectacular animals as they arrive, settle in for a while, or depart from Costa Rica.

Humpback whales are Costa Rica’s most commonly spotted whale. Because there are pods that migrate from both the Southern Hemisphere and the Northern Hemisphere, a population of humpback whales is almost always present somewhere in Costa Rica. The best months however are from August to April. These mammoth creatures are some of the most acrobatic of the large whales, which makes them even more fascinating to observe. Females travel to the tropical waters of Costa Rica to give birth, so it is not unlikely to see a mom and baby together.

The best way to observe these ocean giants is by taking a whale watching boat tour or just by keeping your eyes peeled when you are out on a boat in Costa Rica (maybe on a dive, surf, sailing, or fishing trip). The best places to see them though are within the Ballena National Marine Park in Uvita, off Isla de Cano or Isla de Coco, or in the Golfo Dulce or Golfo Papagayo. They could pop up anywhere along the Pacific coast though!

In order to spend time diving with hammerhead sharks at Cocos Island, you will need to be an experienced diver who is willing to venture out on a ten-day live aboard dive mission. The best time of the year to see the hammerhead sharks are actually during the rainy season months, June to December. During this time of the year, there are nutrient rich upwellings that attract large numbers of fish, including whale sharks and manta rays.

During the rainy season months between August and December, thousands upon thousands of Olive Ridley sea turtles come back to the beach from which they once hatched in order to lay their eggs. The beach is Playa Ostional, which is also a protected wildlife refuge north of Nosara. A week before the new moon is when the arribadas (synchronized mass arrivals) are at their greatest. While turtles nest on this beach year-round, if you want to witness one of the most spectacular congregations of Olive Ridley sea turtles, time your arrival with the new moon and rainy months. Hatchlings start emerging between 45-54 days after they have been laid in the sand by their mothers.

If you find yourself lucky enough to witness such an event, please stand back and give the turtles plenty of space. Sadly, many people get too close, try and touch or take photos right next to the nesting mothers, and greatly interfere with this special event. If you were giving birth, you wouldn’t want someone you didn’t know all up in your personal space. Step back and just observe this beautiful act of nature.

The leatherback turtle is a massive sea creature! They can grow as long as six feet and weight up to 1,500 pounds. The leatherback nests on both the Pacific and Caribbean coasts of Costa Rica, but at opposite times of the year. Between October and March, the Las Baulas National Marine Park in Playa Grande is the prime location for leatherback turtle nesting. As many as 800 leatherbacks make their way to this specific beach every season to lay their eggs. All sea turtles will return to the very beach on with they were born. Between March and October, the Tortuguero National Park on the Caribbean coast receives hundreds of leatherback turtles, along with three other sea turtle species, who are there to lay their eggs and then return to the sea in solitude. 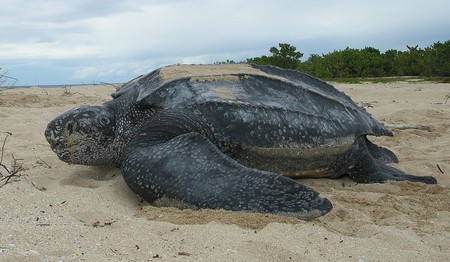 Giants of the sea | © US Fish and Wildlife Services/Flickr

Tortuguero National Park is one of the best places to see all four types of turtles that show up in Costa Rica, however it is most famous for its nesting population of green sea turtles. Tortuguero is one of the most important green turtle nesting sites in the entire world! Green sea turtles can weight up to 400 pounds and throughout the nesting season can deposit up to 700 eggs on the shores of Tortuguero. The green sea turtle peak nesting season is between July and October. The best way to witness these beautiful giants is by taking a night tour with a professional guide.