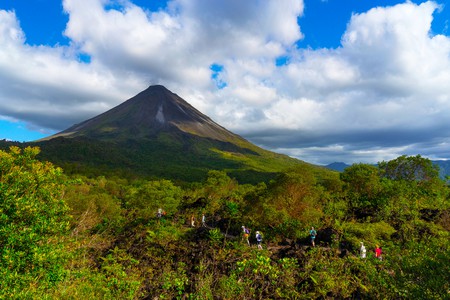 Arenal is the youngest volcano in Costa Rica, estimated to be around 7,000 years old. It casts a shadow over the Arenal Volcano National Park, which is inhabited by hot springs, burgeoning rainforests and endangered species. The conical peak transcends the tropical landscape, not only in height but also in legend, as one of the most historically active volcanoes in Costa Rica.

Although dormant for hundreds of years, Arenal suddenly and violently erupted in 1968. The explosion devastated the surrounding villages of Tabacón, San Luís and Pueblo Nuevo and buried more than 6sqmi (16sqkm) of land under lava, ash and far-flung rocks. What followed was 42 years of effervescent activity, until Arenal finally ceased erupting in 2010. Though now only silently simmering, it still retains its active status.

But fear not. Constant scientific monitoring, a ban on ascension and specialized local tours make this volcano a safe place to visit. Read on for the best things to do in its resplendent shadow, from wildlife safaris in the Arenal Volcano National Park to whitewater rafting on the Balsa River.

The best things to do around Arenal Volcano 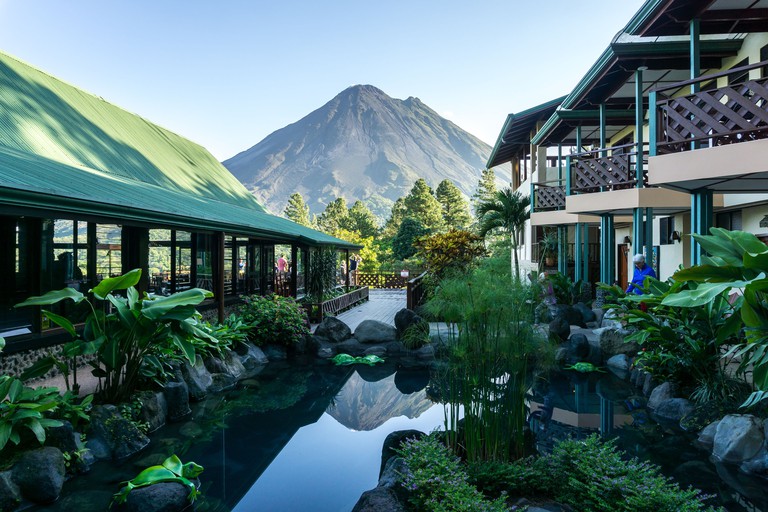 Built as a scientific research station, the Arenal Observatory has developed into a lodge that offers unmatched accommodation beneath the looming peak. The natural surroundings are honored with floor-to-ceiling windows in the restaurant, a huge outdoor observation sundeck and even a rejuvenating spa. You don’t have to be a guest to enjoy these features – join a guided hike through the rainforest and savor the all-encompassing panoramas of the volcano, Arenal Lake and the neighboring Tilarán mountain range.

Go on a wildlife safari through Arenal Volcano National Park 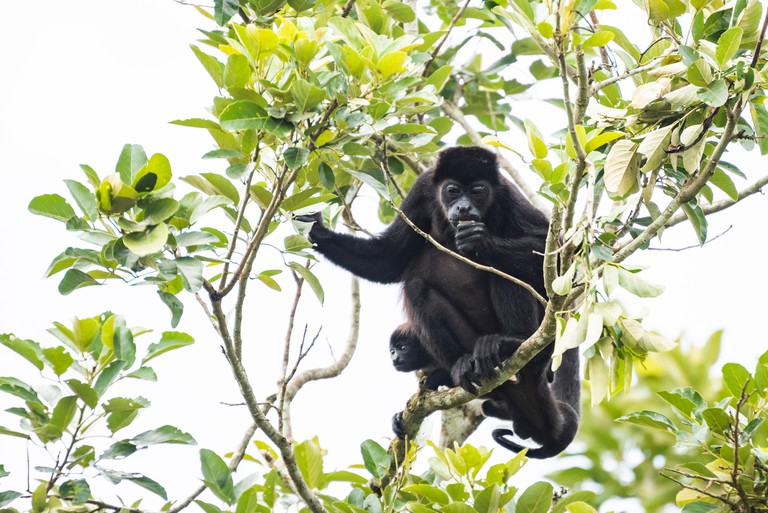 © robertharding / Alamy Stock Photo
Refuge to most of Costa Rica’s 850 species of bird, Arenal Volcano National Park is an unrivaled haven for flora and fauna. Here, you can encounter jaguars, iguanas and white-faced capuchin monkeys amid orchids, ferns and strangler figs. Tour the park on foot with a guide, or opt instead to drift down the Peñas Blancas River on a floating safari, as your local expert points out the curious gazes looking at you from the canopy. 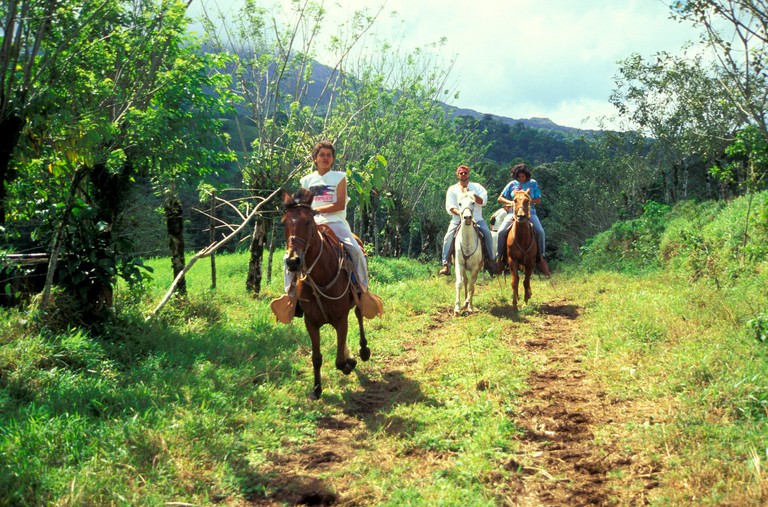 © Image Professionals GmbH / Alamy Stock Photo
A trip to Arenal is incomplete without a visit to the waterfall of La Fortuna, which plummets from the base of the dormant Chato Volcano. The torrent plunges 246ft (75m) into a natural pool. You can swim here, but bear in mind the hike is short but arduous, down a staircase carved into the hillside. For a different pace, reach the stairs on horseback – you’ll traverse the winding terrain of the rainforest on expert hooves. 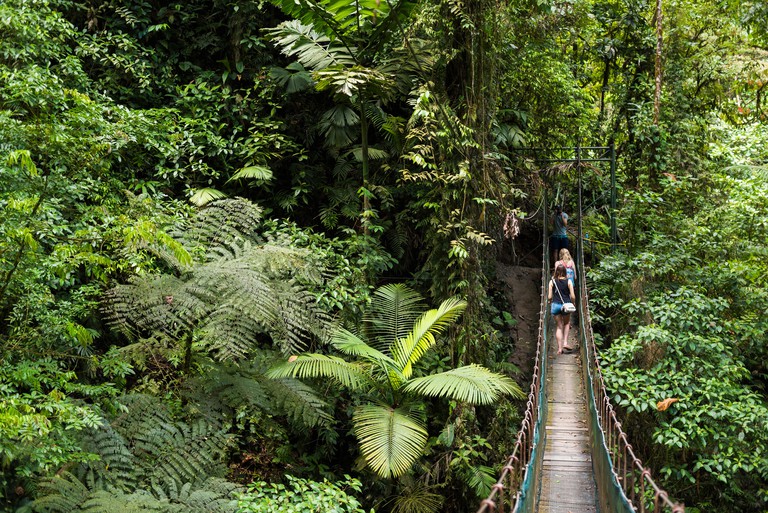 Arenal Volcano National Park is famous for its hanging bridges; 15 connect a gentle 2mi (3km) circuit through the rainforest. Suspend yourself amid the thrum of insects and birdsong, and catch the gaze of a spider monkey or two along the way. The bridges vary in length, between 16ft and 130ft (5m and 39m). Hire a guide for an entertaining and education-led tour.

Zipline through the forest canopy 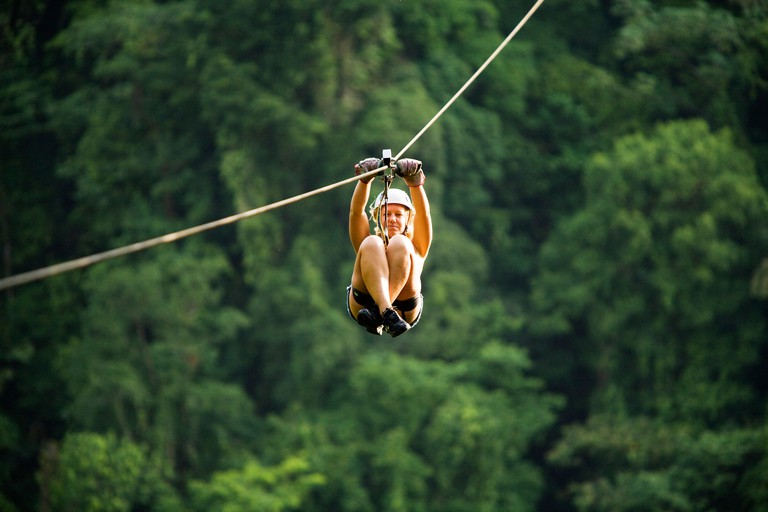 If hanging bridges aren’t high enough for you, then don’t miss the chance to soar through the rainforest attached to a zipline. The best route zips you directly over La Fortuna Waterfall; savor both the crashing cascade and the burgeoning vegetation on your high-altitude cruise. With all this below, don’t forget to look up – the Arenal and Cerro volcanoes peak above the canopy.

Soak in the local hot springs 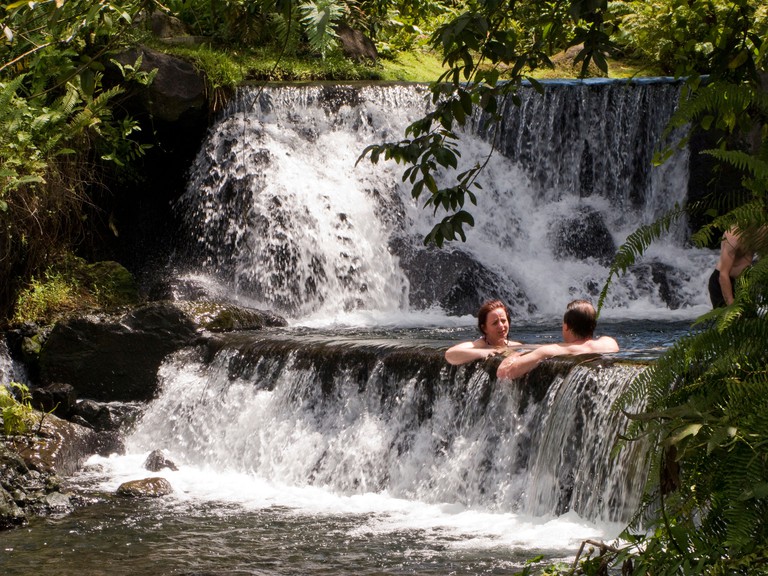 The volcanic landscape of Arenal benefits from natural hot springs, fed by the simmering thermal energy beneath your feet. The majority of the springs are within hotels and resorts, but thanks to guest passes, you don’t need to stay at one to have access. With more than 20 different pools of varying temperatures and cascading thermal waterfalls to sit under, you can do a lot worse than Tabacon Hot Springs. 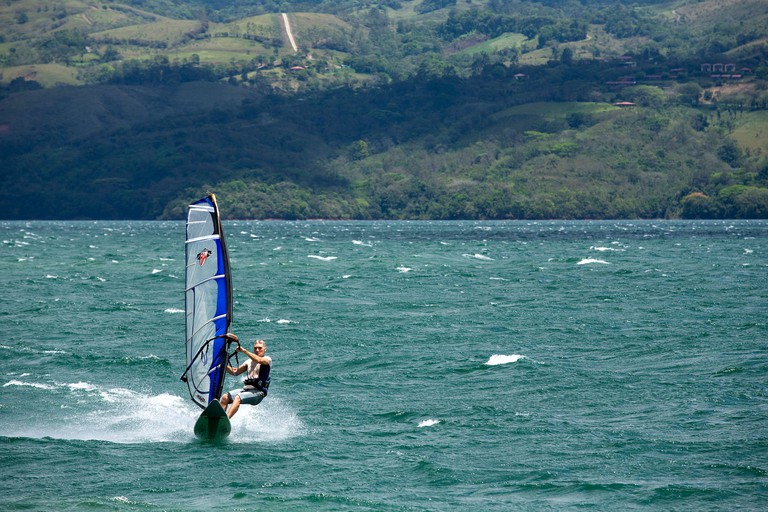 The largest lake in Costa Rica is considered one of the best in the world for kitesurfing and windsurfing, thanks to its strong and dependable airflow from November to April. If you’re only looking to dip your toes, try kayaking and stand-up paddleboarding on the eastern portion of the lake. You can also swim in Lake Arenal; the water is refreshingly cool. 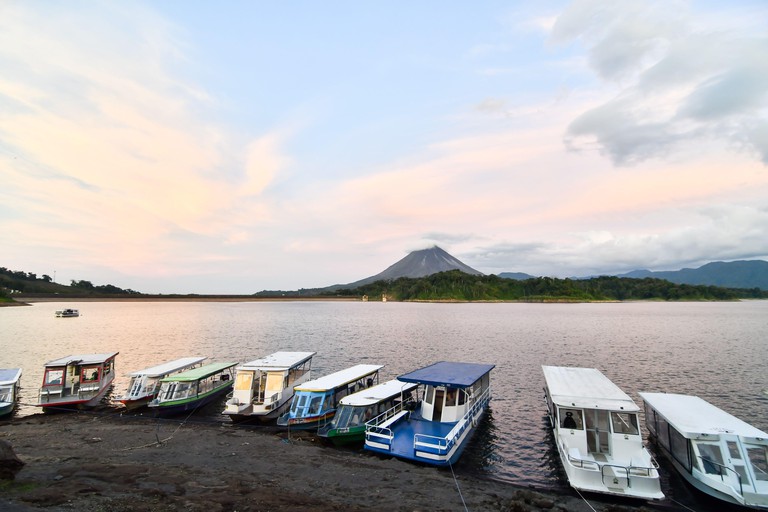 Cast a line into this tropical freshwater lake and haul out a striking rainbow bass (guapote) or even a leaping machaca for a tougher catch. Rent yourself a specialized fishing kayak, some quality gear and even an expert guide. From the deepest expanses to the secluded shallows, this is the ideal lake for serious anglers. Catch and release is the standard here, although a guapote makes for a substantial meal.

If sport isn’t your thing, instead appreciate this great lake from the comfort of a cruiser. Why not accompany your sojourn with dinner or even some local moonshine? Costa Rican fire water could find no better backdrop than the fiery Arenal. This lake is three times its original size thanks to the hydroelectric dam on its eastern side, so there’s plenty of sights for a gentle meander. 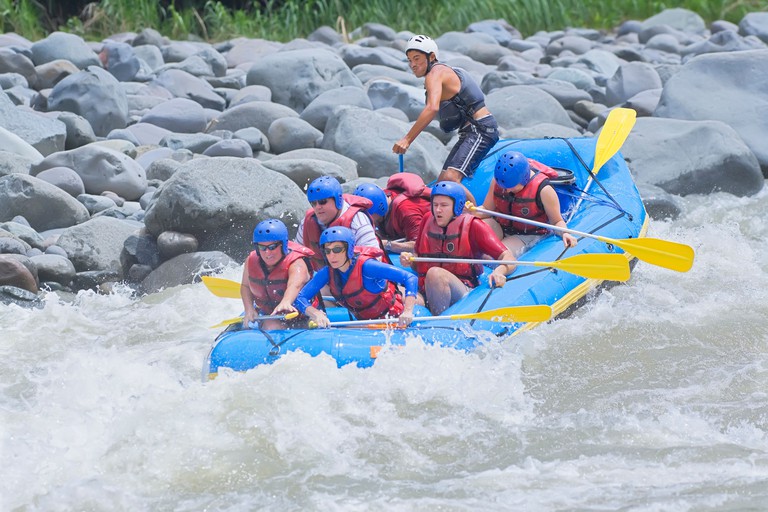 The Balsa River offers adrenaline-seekers miles of rolling rapids with sections for all abilities. Blend bracing whitewater with calmer stretches for picturesque sightseeing – spot a monkey or sloth hanging from the overhead balsa trees (after which the river is named). For those with only a little experience, navigate your descent down class II-III rapids with an expert guide for an unforgettable, and turbulent, time.

How to visit Arenal Volcano

To make the most of Arenal in your Costa Rican itinerary, visit with Culture Trip for an expansive, mind-altering experience led by a local insider. Book onto our specially curated nine-day adventure, which spans the Monteverde Cloud Forest and the Pacific-lapped surf town of Tamarindo, as well as the highlights of Arenal Volcano National Park. Combine wildlife watching, coffee tasting and secret waterfall swimming into an accommodation-inclusive package, counting the luxury Arenal Observatory Lodge among them. If you want to breathe in the beauty of Costa Rica without lifting a finger, let yourself be swept up into this exclusive trip of a lifetime.