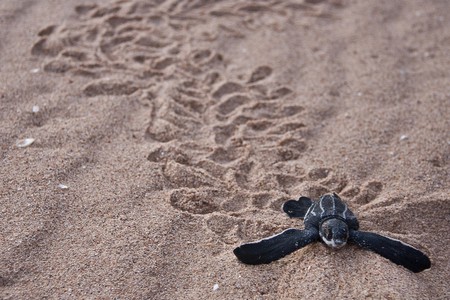 It's a long road ahead | © Jolene Thompson/Flickr

Costa Rica is home to four main species of sea turtles. Both the Caribbean and the Pacific shores host numerous nesting sites that are critical for the continuation of large numbers of each species. There are specific times of the year when you can witness sea turtles nesting and hatching on a grand scale in Costa Rica. You just need to know when and where.

The leatherback turtle is the largest living sea turtle. It is also a species that has rapidly declined in numbers mainly due to human influences. They grow to between 1.2 and 2.4 meters (4 and 8 feet) long and can weigh upwards of 360 kilograms (800 pounds). The leatherback turtle has been cruising around the world’s oceans (Pacific, Atlantic and Indian Ocean) for more than 100 million years.

On the Caribbean side, they nest between March and May. On the Pacific coast, between September and March.

Night tours are available through the Playa Grande MINAE headquarters between October 20 and February 15. You must contact the office at +506-2653-0470 ext. 101 no more than eight days before you want to visit. This is your best opportunity to see the leatherback turtles nesting here. 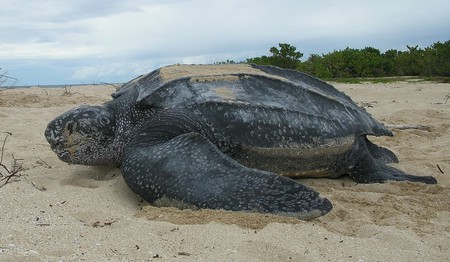 September and October are the two best months to potentially witness an Olive Ridley arribadas. They do continue to nest for several more months on the Pacific coast, however it is usually on a smaller scale.

Ostional Wildlife Refuge and the Santa Rosa National Park are the two most famous Olive Ridley nesting destinations, however there are a few other nesting sites where Olive Ridleys visit before and after those two peak months. It is very important that you are respectful of the nesting mothers and give them plenty of space.

The turtle nesting tour near Playa Samara through Viator is an excellent choice. If you go during the peak Olive Ridley nesting season, your guide will take you to Playa Ostional where you will have the opportunity to potentially witness an arribadas. 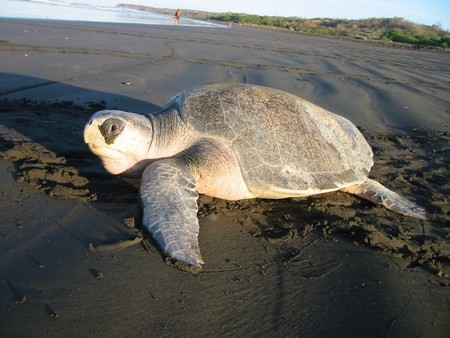 One of thousands | © Brad Fickinger/Flickr

The Hawksbill sea turtle has the most exquisite shell. Unfortunately, because it is so beautiful, their populations have been drastically decimated due to the demand for “tortoiseshell” jewelry and decor. Female Hawksbill turtles will nest up to four times in a season and can lay upwards of 200 eggs each time.

March through October are the best months to spot Hawksbill nesting and hatching on the Caribbean coast of Costa Rica.

Hawksbills prefer to nest on the Caribbean coast. They can however be spotted feeding in the waters off Gulfo Dulce in the South Pacific region of Costa Rica. They nest in the Cahuita National Park, Gandoca-Manzanillo Wildlife Refuge, and the Tortuguero National Park. 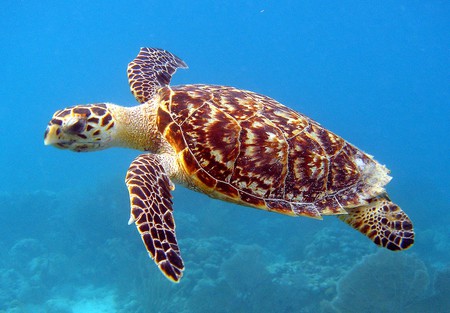 Check out that shell! | © U.S. Fish and Wildlife Services/Flickr

The green sea turtle is a massive and beautiful sea creature, smaller only than the leatherback turtle. A full grown adult can weigh up to 225 kilograms (500 pounds). Green sea turtles are grazers and eat mainly seagrass, algae and other types of marine plants. Green sea turtles will lay upwards of 700 eggs per nesting season.

July through October is the peak nesting and hatching season for the green sea turtle. 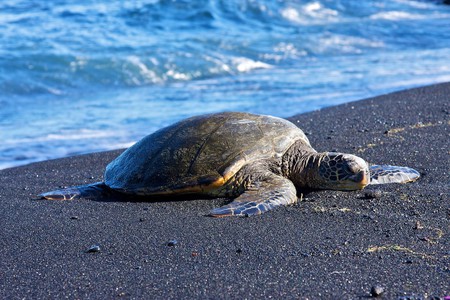