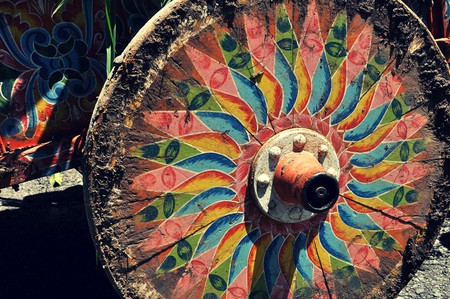 The traditional oxcart, or carreta, will forever be a symbol of Costa Rica‘s rural history and traditional way of life during the mid-19th and 20th centuries. Still much-cherished today, these cheerily painted reminders of the past are easy to spot thanks to their bright colors and vivid patterns. Here’s everything you need to know about this most charming of Costa Rican traditions.

Prior to the railroad and motorized transportation, followed by the increased accessibility of rural Costa Rica, a pair of oxen and an oxcart were the main mode of transportation for most families. They were used to get to social events, run errands, and even to take families on vacation – before the now defunct railroad between San Jose and Puntarenas was built, families would make the return four-to-five day trip to the coast, for a short two-to-three day summer beach vacation. Between 1850-1935, the oxcart was the main mode of transportation and was the principal means of transporting goods from one part of the country to another.

In the mid-19th century, oxcarts were used to transport coffee beans from the Central Valley all the way to Puntarenas on the Pacific coast. This was a journey that took roughly 15 days to complete. The strong wood oxcart could push through muddy paths, rocky mountain passes, up and down hills, and through small rivers – the demand for coffee was a strong one! During this period of time, the oxcart was critical for the exportation of coffee from coffee farms in the middle part of the country, though it wasn’t until around 1903 that the tradition of decorating oxcarts began. 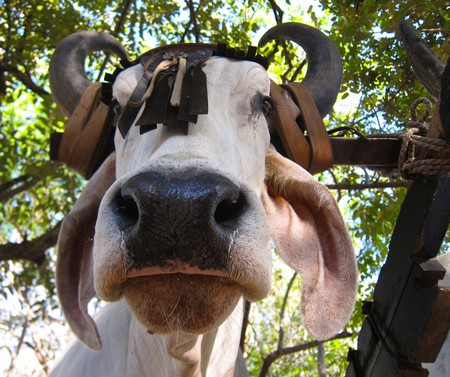 At this time, oxcart owners started painting the wheels of their vehicles. Originally, each region had its own distinctive design, and the shapes depicted on any one owner’s oxcart showed where they came from. Eventually though, people started painting flowers, landscapes, animals, faces, and other colorful patterns on their oxcarts to make them truly unique, and the practice became a source of great pride. People began using higher quality woods too when building their oxcart. Additionally, each oxcart was also designed to make its own ‘song’, made by a metal ring that hung down and hit the hubnut of the wheel as the cart moved along the bumpy terrain. The better quality of wood used, the better the quality of the song.

After World World II, the use of oxcarts to transport coffee, other goods, and families began to decline – there were better methods in play now, between trains and automobiles. However, the tradition and pride of painting oxcarts stayed alive and is still a proud symbol today in Costa Rican culture. This art is one that continues to be passed down from generation to generation.

A celebration of history

Every year on the second Sunday in March, there is a festival in San Antonio de Escazu called El Dia de Boyero (oxcart driver’s day), with a parade of the most beautiful hand-painted oxcarts. The festival also features an oxcart and oxcart driver’s competition, traditional costumes, dancing, and food. The last week in November in San Jose, there is another parade honoring the tradition of painted oxcarts called El Desfile de Carretas. As a visitor, both of these are exceptional cultural events to attend and an amazing opportunity to experience the vibrant and colorful oxcart culture and tradition. 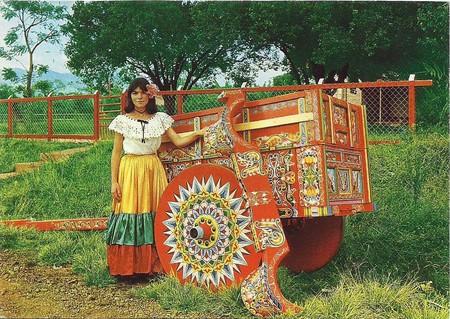 The town of Sarchi in the province of Alejuela is famous for manufacturing and decorating oxcarts. There are exquisitely painted specimens all over the town, including in gardens, in front of churches, and in stores – visitors here can check out all manner of different designs, sizes, and colors. As well as being the oxcart capital of Costa Rica, Sarchi is also home to the Joaquin Chaverri Oxcart Factory, the oldest and largest oxcart factory in the country built in 1902. The Guinness Book of World Records also gave the award for the world’s largest oxcart in 2006 to an oxcart in Sarchi. 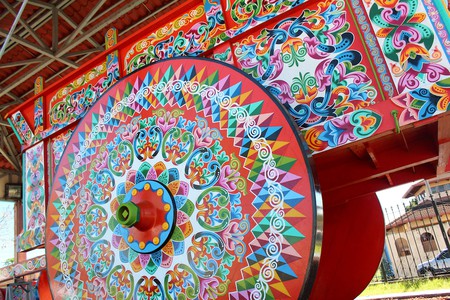 Biggest oxcart in the world | © LEAF Project/Flickr
Give us feedback