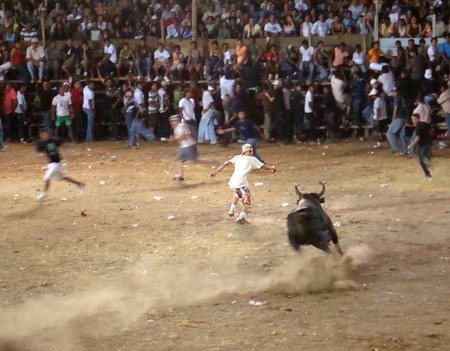 During the summer months in Costa Rica (dry season), almost every town holds its own fiesta civicas, with horse parades, carnival rides and games, a variety of food stalls, dances, live music, alcohol vendors, and traditional Costa Rican “bullfighting.” Corridas de toros (directly translating to mean running, rather than fighting with bulls) have been a long standing tradition in Costa Rica.

Unlike what most people envision of when they think of bullfighting – which ultimately includes the death of the bull – in Costa Rica it is more about participants surviving the bull, and in no way attacking or killing it. It is not a tradition of glorifying man’s power over a beast, it is quite the opposite.

At some fiestas, especially the bigger ones, there are paid, experienced improvisados who are there to entertain the crowd and assist the amateurs during emergencies. The bull can hurt or kill anyone at any moment, but no one is allowed to hurt the bull. 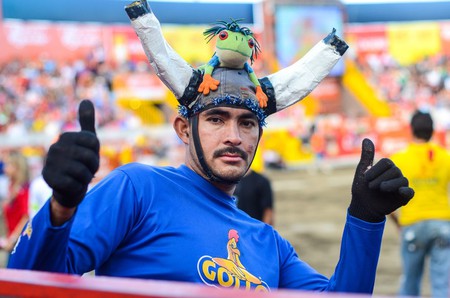 That's hats not going to save you! | © Albert Font/Tico Times

The grandest and most famous annual fiesta is the Fiestas de Zapote. This week-long party takes place in the small town of Zapote, just outside of San Jose. It is a combination of a carnival and a rodeo. The highlight here, though, is the bullfight. Cattle owners bring their most impressive and prized bulls from all over the nation. For some bulls, this isn’t their first rodeo, and they have earned themselves notorious reputations from past fiestas. Festival organizers offer cash prizes for the best performance in the ring. Improvisados are judged on technique, acrobatics around the bull, and their popularity with the crowd. There are even games like dos ceros (two zeros) where improvisados are placed in two circles to see who is the bravest and will stay in the circle the longest as the raging bull runs around the ring. 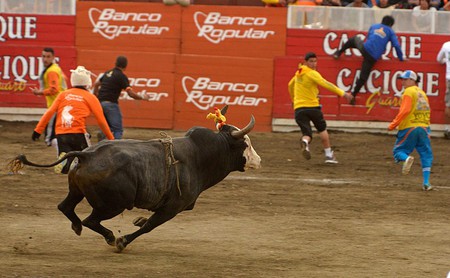 The most famous bull of all

Weighing in at 1,700 pounds (770 kilos) and decorated with black and white speckled skin, Malacrianza appeared on the scene in 2004. His mammoth horns resembled the devil’s pitchfork, and his temperament made him truly a force to be reckoned with. Ubaldo Rodriguez acquired this impressive beast in a bulk livestock purchase. He quickly realized that Malacrianza was not fit to be around the other farm animals because of his innate aggression and temper. So, he decided that maybe Malacrianza’s purpose was to be in the ring. His first fiesta was the Fiesta de Los Angeles de Nicoya in Guanacaste where he was immediately a crowd pleaser. Over the years, Malacrianza has killed two bull riders and injured countless others. Malacrianza’s reign lasted a staggering 10 years.

There has been a lot of controversy surrounding this tradition, especially in more recent times. Every year, hundreds of improvisados are injured by their decision to get into the ring. At a mid-sized fiesta civica, it is reported that an average of 30 injuries take place each night, some more severe than others. Injuries can range from twisted ankles from tripping to a punctured lung from being gorged by the horns of a bull. There have even been several deaths. Both Costa Ricans and tourists alike are putting themselves in a very high risk situation when they decide to enter the ring. And while the bulls are not physically harmed or killed during these events, it is questioned whether or not it’s right to taunt and provoke these massive animals in front of yelling crowds and all of the commotion of the fiestas for the sake of keeping the tradition alive. 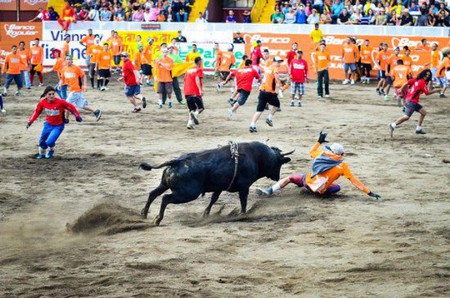 Someone always gets hurt | © Lindsey Fendt
Give us feedback