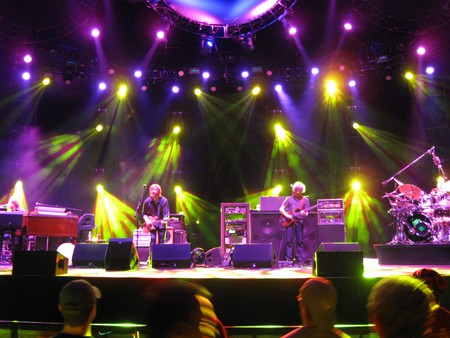 Noticeably since the early 90s, talented Costa Ricans have been creating rock music that has been making musical waves throughout the country, and sometimes even crossing borders. Famous influences such as Pink Floyd and The Beatles, and strong themes like anti-violence, anti-war, small town living, longing for the past, and love are prominent throughout the rock music coming out of Costa Rica. There is also a uniqueness to the Costa Rican bands that are putting on shows and releasing records for all generations of rock and rollers.

The most popular place to see live music in Costa Rica is the Estadio Ricardo Saprissa Ayma (Saprissa Stadium) in San Jose. This venue has the capacity to hold 24,000 rock fans and has put on concerts by big name performers like Aerosmith, Carlos Santana, Green Day, and Bon Jovi. The National Stadium in La Sabana Park is another spot that is gaining popularity among music enthusiasts. The Jazz Café is one of the best places to see smaller local bands. The Hard Rock Café also hosts live music and has an events calendar on their website. Music is a big part of Costa Rican culture. While rock and roll is a relatively newer genre on the scene compared to salsa, merengue, marimba, and bachata, it seems to be here to stay.

The following seven songs preview of some of Costa Rica’s rock bands. This selection shows what a variety there is within this genre of music.

Kadeho is a band that was formed in 1996 in Puntarenas. Prior to being Kadeho, the band was called Praxis and was made up of six members. Praxis disbanded in the early 90s and Jorge Zumbado (vocals), Roberto Brenes (guitar), Juan Carlos Brenes (bass), and Mario Miranda (drums) came together to try the band thing again. Mario Miranda is the only member of the group who is not originally from Puntarenas. The band is currently signed with the label DDM.

Efecto Mariposa is a six-member band from Mal Pais. The band formed in 1999, but it wasn’t until 2001 that they played a show for the very first time. Their first album, Uno, was released in 2002 and was an immediate hit. The band is recognized for being wonderfully different from any other band in Costa Rica. They have a unique sound that blends a lot of different musical influences, such as American folk and jazz. Their songs focus on urban life, love, and loneliness.

Perceptions is a five member rock and roll and blues band from San Jose. The band formed in 2014 and they have pretty much been on the road and on tour ever since. They have played at some of the best venues in Costa Rica and also performed at UCR’s Semana U Festival. Their music, including their latest single, “Drive Me Crazy,” is available on Spotify.

Duo Marta Fonseca and Bernal Villegas started Suite Doble in 1995. They released their first album, 69, in 1998. They ended up winning the ACAM award for their collection of 12 original songs. Over the years, the band has put out two more albums, Suite Doble and Acustico. They continue to play at places like the Hard Rock Café.

Tango India’s original two members, Felipe Solis and Juan Diego Villegas, started the band when they were just 17 years old. In 1998, they released their first complete album called Where Are You If It Is Not Here, which was well received. They added three more members to their band, Gabriel Wiernik, Alonso Carballo, and Marco Castro, and have continued to progress. The band has a contract with Sony Music.

Colornoise is an experimental rock band from Heredia, Costa Rica. The band released their first eight-track LP, Fake Apocalypse, in 2011, and in 2013 their second album, Polychronic, came out. Originally the band was just Sonya Carmona and Alison Alvarado, but in 2015 they added a new member, Mari Navarro. This talented trio is creating some great music.