If you find yourself in Costa Rica, you must try its national liquor, guaro. Guaro or Cacique (the official brand name) is a clear sixty proof liquor made from sugar cane. Before it was legally manufactured and sold, guaro was made at homemade distilleries and was the “rural kitchen sink alcohol” of Costa Rica. Guaro was Costa Rica’s moonshine.

This festive and now readily available liquor – which is typically mixed with fresh fruit juice, Sprite, Fresca or soda water – is quite delicious and will surely bring out the fiesta inside of you! You can buy it at any liquor store, food store, bar or restaurant. There is even a 365ml “pachita”, which comes in a plastic bottle and is great for on-the-go-guaro. The availability of guaro became widespread after its legalization in 1851, with varieties such as 70 proof black label and 80 proof Superior Canita being added more recently.

Its legalization came about when the Costa Rican government decided to approve the manufacturing and bottling of guaro in an attempt to end the secret homemade production of it. Aside from wanting to capitalize and be able to tax this national treasure, it was important to the government to be able to ensure that guaro was and continues to be safely made since so many people were drinking it. While homemade clandestine distilleries still exist in Costa Rica, most are producing palm wines and no longer make guaro. 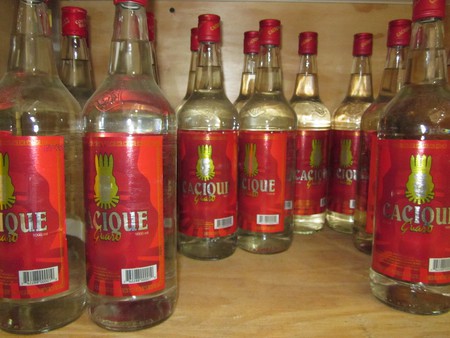 The name Cacique has a history of its own. Between 1977 and 1980, the Costa Rica National Museum discovered and excavated one of the largest indigenous settlements right outside of the town of Grecia, which is also where Costa Rica’s National Liquor Factory is located. The name Cacique – meaning “chief” – was chosen to honor this incredible archeological and historical find.

Even after 160 years, guaro has continued to grow in popularity, especially among visitors. While you cannot buy it outside of Costa Rica, it can be shipped internationally. In recent years, bootleg versions of guaro have entered the market, but there is no version like the original version! Be sure to pick up a bottle to take home at the duty-free or you can even arrange to have it delivered online. It’s an ideal liquor to bring back to your friends and family to drink together while you share your amazing tales from your journey to Costa Rica.

A brief history of guaro wouldn’t be complete without talking about chili guaro. Chili guaro is a famous Costa Rican shot. It is highly recommended that you try at least one chili guaro during your time in Costa Rica, but ensure that you try it from an authentic Costa Rican establishment. Though relatively simple, it is one of those shots that can easily be messed up by someone that doesn’t truly know how to make it. So, what is a chili guaro?

A chili guaro shot is a shot made with guaro, tomato juice, lime, tabasco and sometimes a splash of Lizano sauce. All the ingredients are combined and shaken with ice before being poured into a shot glass. This delightfully light and spicy shot is divinely delicious!