11 Secret Islands in Central America That You Never Knew Existed 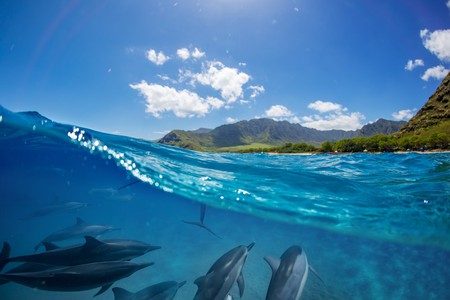 There are hundreds of islands located off the Pacific and the Caribbean coasts of Central America. Some are well-known and host droves of tourists, while others have remained under the radar, at least for now. Check out some of the last remaining “secret” islands of Belize, Costa Rica, Honduras, Mexico, Nicaragua, and Panama.

Glover’s Reef Atoll is a small privately owned island in Belize. It is a World Heritage Site and Marine Reserve. The 9 acre (3.64 hectares) island is surrounded by Glover’s Reef, which is a 90 square miles (145 square km) stretch of reef that is made up of 700 individual patch reefs in a lagoon that is surrounded by 50 miles (80.5 km) of sheer drop-off. This reef system is where the North American plate meets the Caribbean plate. The white sand and coconut lined island is open to visitors, but as you can imagine only a small number at a time. There are camping and cabin options on the island and endless diving and snorkeling opportunities. 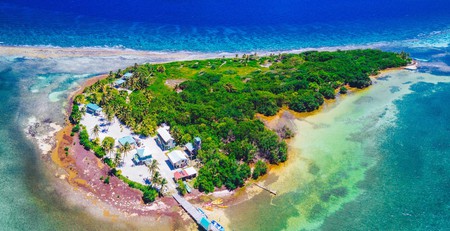 The magic lays rest under the surface | © Duarte Dellarole/Shutterstock

The Bat Islands, or Islas Murciélagos in Spanish, is one of the premier dive destinations in Costa Rica, especially for thrill-seeking intermediate and advanced divers who dare to dive with bull sharks. The Bat Islands are part of the marine protected portion of the Santa Rosa National Park. May through November offer some of the best diving off these islands. While they are famous for their bull shark populations, they are also home to manta rays and huge schools of tropical fish. The boat ride to and from the Bat Islands offer an incredible opportunity to witness some of the exquisite marine life in the Santa Rosa National Park, including pilot whales, humpback whales, dolphins, jumping sting rays, and sea turtles. 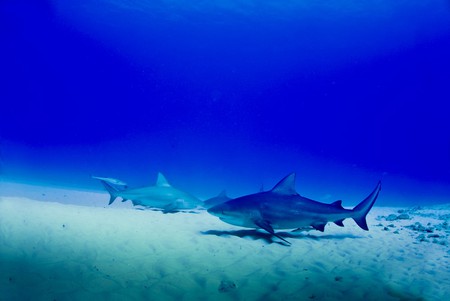 Face to face with the bullies of the sea | © bcampbell65/Shutterstock

Uvita Island is a small island located just 1.86 miles (3 km) off the coast of Limon on the Caribbean side of Costa Rica. It’s only a ten minute boat ride from the mainland. It’s indigenous name is Quiribrí Island, which means Birdsong Island. In 1502, Christopher Columbus actually arrived on this island and named it La Huerta. The island is just 27 acres (11 hectares), but is an important nesting site for the hawksbill sea turtle and home to sloths, the brown booby, and many other birds. It is surrounded by coral reefs and under water caverns, which make this an exceptional scuba diving site. 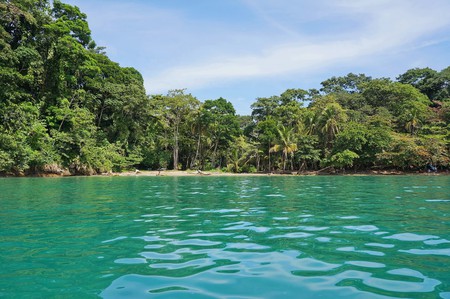 Columbus once pulled up here | © Damsea/Shutterstock

Isla del Caño is located just 12.4 miles (20 km) off the Osa Peninsula in Costa Rica and is a protected as a biological reserve. The island was once a cemetery during pre-Columbian times and evidence of long-gone indigenous cultures are evident, including some mysterious stone spheres. The picturesque white sand tropical island is surrounded by five platforms of low coral reefs and home to an abundance of marine life, including sharks, whale sharks, dolphins, moray eels, sting rays, and a variety of tropical reef fish. There are day tours that you can take to the island, which include spending time on the island and in the reefs around it. It is also possible to camp on the island. 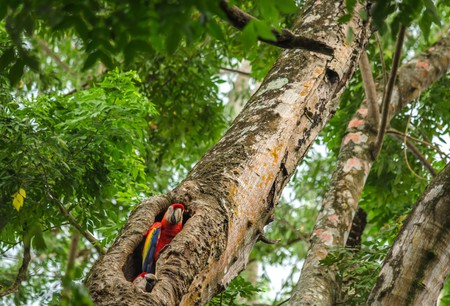 While Roatán remains the most popular island destination in Honduras, the Hog Islands, or Cayos Cochinos, are two lesser known islands and 13 coral cayes off the northern mainland coast. The islands are protected and there are no roads or cars allowed, only walking trails. National Geographic wrote that “the waters around this collection of coral cayes are a marine biologist’s dream.” Great efforts have been made to protect the land and water around these islands. There are a few places to stay in the Hog Islands or you can take a boat over for the day from Le Ceiba. 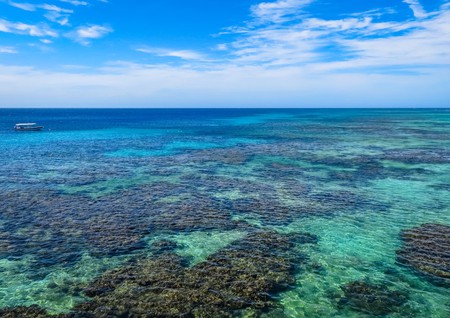 Isla Guadalupe is a remote volcanic island 150 miles (241 km) off the west coast of Mexico’s Baja Peninsula. The waters surrounding this island typically have a clear visibility range of 30 to 46 meters (100 to 150 feet). These conditions are some of the most ideal for cage diving and observing the island’s most famous residents, the great white sharks. Researchers have identified 228 resident great white sharks here. The waters around the island are rich in other predatory marine animals, like elephant seals and the endemic Guadalupe seal. Daring abalone and lobster fishermen dive these waters as well, and have some pretty jaw-dropping stories to share. 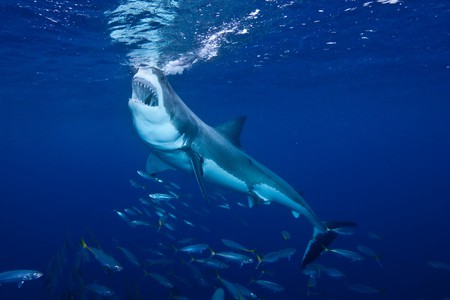 An experience of a lifetime | © Jim Agronick/Shutterstock

Jacques Cousteau once said that “the Sea of Cortez is the aquarium of the world.” Isla Espíritu Santo is located between mainland Mexico and the Mexican state of Baja California Sur in the Sea of Cortez. It is a World Heritage Site where you can swim with playful sea lions, snorkel and scuba dive in pristine and marine life-rich waters, kayak, and camp under the stars. There are no hotels or marinas on the island, so camping is your only option, but it is truly the way to go here.

Isla Ometepe is an island in the southwest portion of Nicaragua’s massive Lake Nicaragua. The island hosts the iconic twin volcanoes Concepción and Maderas. Lake Nicaragua once supported a large population of bull sharks, but they have long been fished out, unfortunately. This freshwater lake island is home to dense forests, waterfalls, natural springs, expansive lake views, and tons of hiking options. 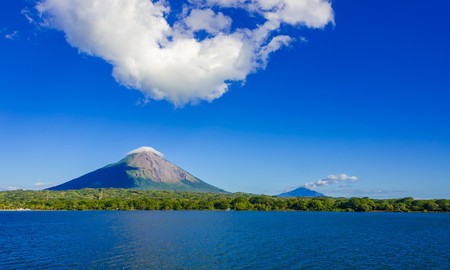 The Corn Islands are located 43.5 miles (70 km) east of the Caribbean coast of Nicaragua. Little Corn Island is the lesser developed and visited of the two islands, which is what makes it kind of special. The island is surrounded by the inviting and warm crystal clear waters of the Caribbean Sea. Little Corn Island is a place where you can truly kick back, relax, and disconnect from the rest of the world. Your days can be spent lounging under palm trees, swimming in the turquoise sea, eating the freshest fish you’ve ever had, and star gazing deep into the galaxy at night. 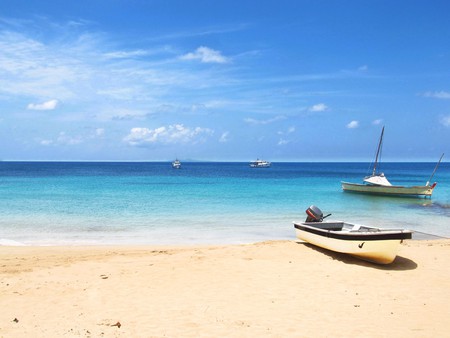 Islas Zapatillas are two tiny undeveloped islands in Bocas del Toro, Panama. While humans don’t live on these islands, sloths do. They are protected as part of the Bastimentos National Marine Park and are completely surrounded by coral reef. The untouched islands have been praised for their exceptional beauty. You can take a panga (a small boat) from Isla Colon and spend the day snorkeling, soaking in the shallows, or picnicking on the shoreline. 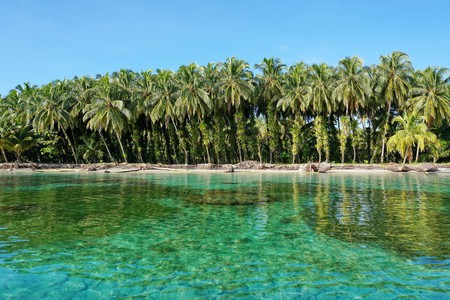 The San Blas Islands are an archipelago of over 300 islands scattered in the Caribbean Sea off the Coast of Panama. The Kuna Tribe of Panama live on these islands and have strictly controlled development and tourism here. The San Blas Islands are actually an autonomous territory in Panama that was once called Kuna Yala. The Kuna Tribe’s efforts to keep mass tourism out of the islands has helped make these islands so special to visit. If you are searching for untouched nature, fascinating culture, and an opportunity to escape deep into a tropical utopia, this is the place of your dreams. 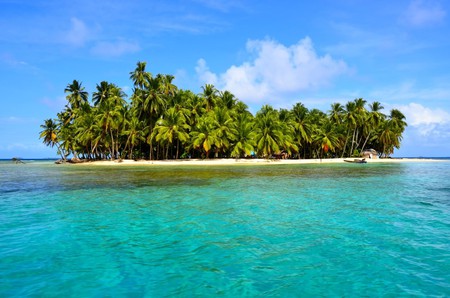