Awesome Native Animals You Must See in Costa Rica 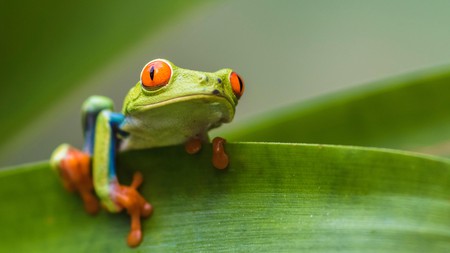 There are more than 500,000 animal and plant species in Costa Rica, making the nation one of the 20 most biodiverse countries in the world. For this reason, it is an incredible place to come and see unique and abundant wildlife and features 32 national parks, 51 wildlife refuges, 13 forest reserves and eight biological reserves. Wildlife is everywhere in Costa Rica though, not just in protected areas, so keep your eyes peeled and enjoy the vast natural wonders of this magical place.

For the best chance of a wildlife encounter, book yourself on our epic nine-day tour of the cloud and rainforests of Costa Rica, including the infamous hanging bridges of Arenal Volcano National Park. 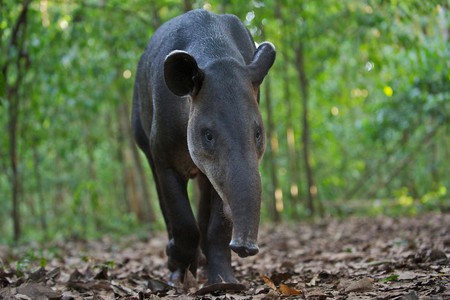 Tapirs eat mostly fruit, leaves and twigs and play an important role in dispersing seeds in the deciduous dry forests and tropical evergreen forests of Costa Rica. As adults, they can weigh between 150kg and 300kg (331lb and 661lb). These solitary forest giants have a unique, but functional look; they have an elongated upper lip that looks like a short elephant trunk, which helps them grab their food. Your best chances of spotting a tapir are in the Corcovado National Park, Santa Rosa National Park, or Monteverde Cloud Forest. 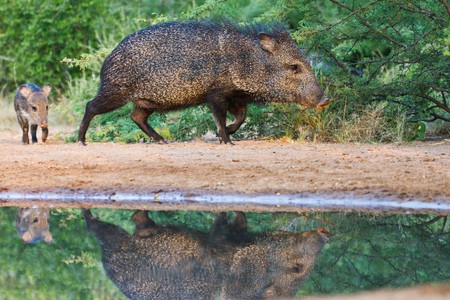 Peccaries are adorable little wild pigs found in the deciduous dry forest, tropical rainforests, low-lying shrub forests, and agricultural areas in Costa Rica. They are resourceful and adaptable and live in herds of between three and 30 other peccaries, maintaining a hierarchical structure within their herd. Peccaries are also very vocal and can get aggressive in disputes over water. 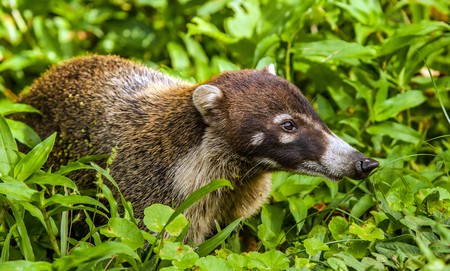 While coatis, also known as coatimundis, are most common in the Guanacaste province of Costa Rica, they can be seen all over the country. They love the hot, dry forests as well as the cooler mountainous areas and everything in between. They are carnivores that feast mainly on insects, eggs, fruits and nuts, but they are also scavengers. Coatis are social animals that typically travel in groups, and they also don’t seem to be afraid of humans and associate us with food, so be careful not to get too close to them. 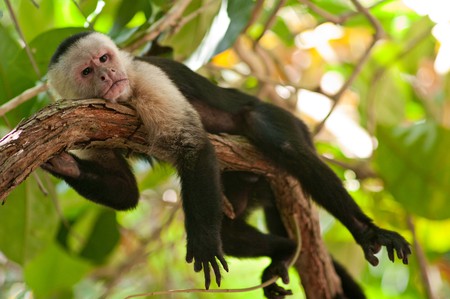 White-faced capuchin monkeys are common throughout the dry forests, rainforests and cloud forests of Costa Rica. They are a highly intelligent animal and live in large social groups that can reach as many as 30. Capuchins are not picky eaters; they eat everything from insects and eggs to fruit and flowers. Costa Rica has a healthy population, and they are commonly seen in the Manuel Antonio National Park and all along the Osa Peninsula. 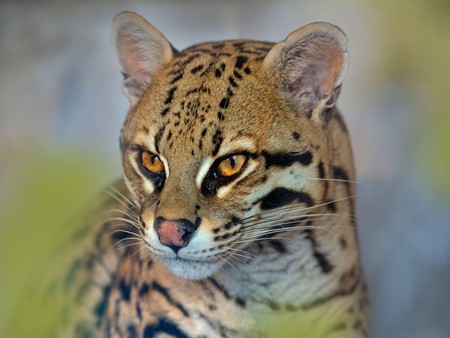 The ocelot, called manigordo in Spanish, lives in deciduous forests, primary and secondary rainforests, and valleys in Costa Rica. This beautiful wild cat has huge feet, which is how it got its Spanish name, which translates to fat hand. They are secretive and rarely seen in the wild – so if you spot one, consider yourself incredibly lucky. However, you can see them at wildlife sanctuaries, such as La Paz Waterfall Gardens Nature Park. Their favorite foods are iguanas and peccaries. 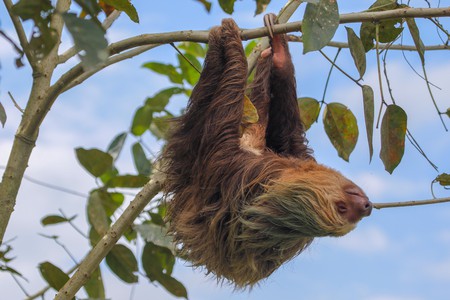 The three-toed sloth is definitely on the list of the most bizarre animals in Costa Rica, but it is also one of the cutest. The slow-moving cloud forest and rainforest resident lives high up in the treetops. They climb down to the forest floor once a week to eliminate waste. Your best chance of spotting one is in Manuel Antonio, the Osa Peninsula or Tortuguero. You can also learn more about them at the Sloth Sanctuary or Sloth Institute. 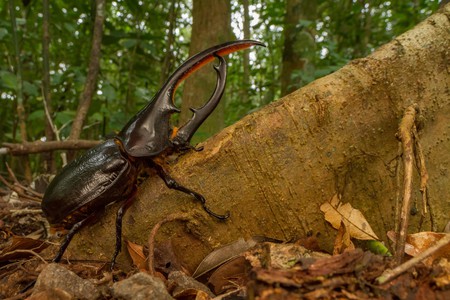 The rhinoceros beetle, sometimes called the elephant beetle, is probably the most amazing bug in Costa Rica. This giant, which can grow up to 6in (15cm) long, live in low-lying rainforests, and visitors can often see them in the Tortuguero National Park, Cano Negro Wildlife Refuge, Corcovado National Park and Palo Verde National Park. While they might look like scary forest monsters, they are completely harmless. 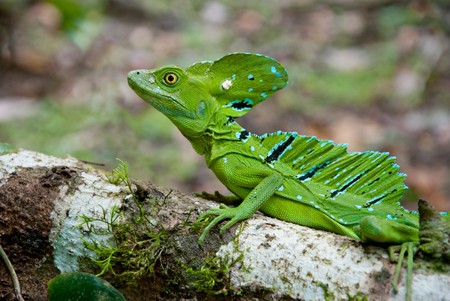 The Jesus Christ lizard, or basilisk lizard, is one impressive reptile. It feeds on winged insects, small fish, freshwater shrimp, and even other lizards, snakes and birds. But the reptile is best known for being able to run on water, using speed and special folds of skin on its feet to create air pockets that stop it from sinking. Visitors can see this bright green animal in the Osa Peninsula. It likes low-elevation rainforest areas. 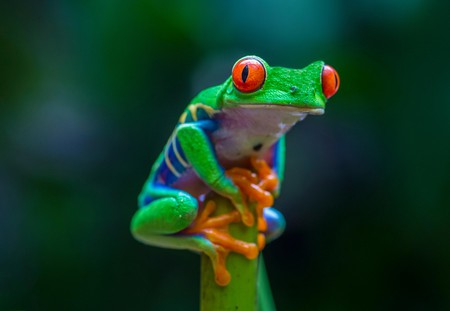 The red-eyed tree frog is an amphibian found in the Costa Rican rainforests. Their vibrant eyes help them to temporarily paralyze their predators, which gives the frogs a few moments to escape. Red-eyed tree frogs are nocturnal and sleep underneath leaves during the day. 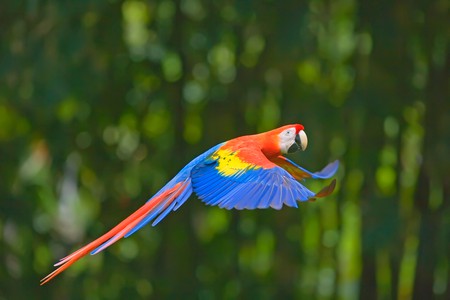 Scarlet macaws are exquisite birds and native to Costa Rica. They can live as long as 60 years and mate for life. These vibrantly colored and talkative birds live in the coastal forests of the country and are visible in abundance in Manuel Antonio and on the Osa Peninsula. They were once nearly extinct in Costa Rica but have made an incredible recovery thanks to laws prohibiting the capture and caging of them, along with the repopulating efforts made by organizations such as Zoo Ave and the Ara Project. 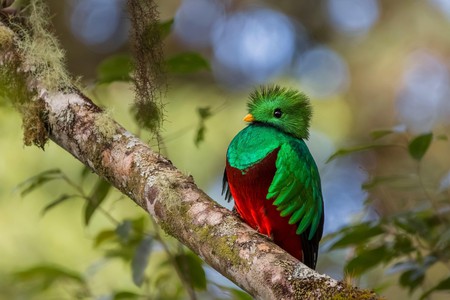 The resplendent quetzal is one of the most astonishingly beautiful birds in Costa Rica. They live in the cloud forests, and wild avocados are their favorite food. They are difficult to spot because they blend into their surroundings. They are so spectacular there is even a park in Costa Rica named in their honor, the Quetzal National Park, located alongside the Pan American highway before Cerro de la Muerte.