Calypso Rose: Queen Of The Carnival

Calypso Rose is an iconic cultural figure in her native Trinidad and Tobago, where she is revered as one of the greatest Calypso singers ever, and a key figure in bringing the music of the Caribbean to the wider world. Culture Trip explores her pioneering life and work.

Calypso Rose, the ground breaking singer and premier ambassador of Caribbean music, was born McArthur Linda Sandy-Lewis on the small island of Tobago in the West Indies on April 27th 1940. At age nine McArthur left the small inland village of Bethel, where she lived with her parents and ten siblings, to live with her aunt and uncle on the neighboring island of Trinidad. By the age of fifteen she had begun her song writing career and by 1964 had turned professional. McArthur originally started out under the pseudonym Crusoe Kid but was later dubbed Calypso Rose, a name she has kept ever since.

However, it wasn’t an easy path to fame for Rose as her family were very traditional and opposed her singing in Carnival tents. It also wasn’t easy being female in a scene so heavily dominated by men. Rose had started singing in the Calypso competitions that were part of carnival season on the island and soon managed to gain the respect of many (though not all) of her fellow Calypsonians regardless of her gender. 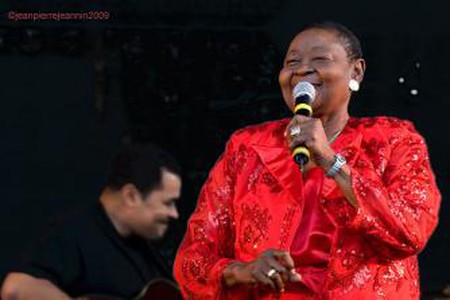 The point of the competitions during carnival season is to see who has the sharpest lyrics combined with the catchiest beat and this is a challenge that Rose took to with aplomb. Many of her lyrics are feminist in nature and offer up a social or political commentary on the state of her nation and the rest of the world. Her sharp tongue combined with party beats were to be the springboard for her enduring success.

In 1963 she travelled outside of Trinidad and Tobago for the first time and won the Roadmarch and the Calypso King competitions in St Thomas with her first recording Cooperation. In 1966 she wrote the now iconic Calypso anthem, ‘Fire in Me Wire’ which went on to become the first ever calypso sung for two years running at the Trinidad Carnival in 1966 and 1967. It has been translated into eight different languages.

Despite all this, it wasn’t until the mid-70’s that Calypso Rose won any of the major calypso competitions. In 1972 her run of a five-year streak as the Calypso Queen began and in 1977 she became the first woman to win the Trinidad Road march with her song ‘Gimme More Tempo’. A year later she stormed her way to the title again with ‘Come Leh We Jam’ as well as scoring another first for womankind when she won Calypso King Competition which, in turn, prompted the name change to the Calypso Monarch competition.

By now Calypso Rose was the undisputed Queen of the genre and continued success put her on the global map; she has gone on to headline major venues and festival around the world including in the US, Europe and Australia. In 1983 Calypso moved to Jamaica, Queens in downtown New York City and has continued to live there ever since.

By the early 90’s the awards were still rolling in but this time they were lifetime achievement and outstanding contribution awards. In fact, so highly regarded in her field is Calypso Rose that as of 2011 she is the most decorated Calypsonian in Trinidad’s history, and was awarded the Trinidad and Tobago Gold Humming Bird Medal, an award given to Trinidadians ‘for loyal and devoted service beneficial to the state in any field, or acts of gallantry’.

So influential on the world music scene is Calypso Rose that she has shared the stage with other such musical legends like Miriam Makeba, Tito Puente, Mahalia Jackson, Michael Jackson, Roberta Flack, Bob Marley and many others. She has also been the focus of several documentaries, including Lioness of the Jungle which is a full length feature about her career path as well as her life and work both within and outside of Calypso music.

Undoubtedly one of the most recognizable faces in the world music scene her success can be attributed to her unstoppable stage persona, where her charisma acts as a beacon to the crowd, and her unrelenting pushing of boundaries. Calypso’s music manages to fuse the rhythms and melodies of Africa and Central America into something that is uniquely Caribbean in spirit.

Check out the Trailer for The Lioness of the Jungle: