Zeb Hogan and the Hunt for the Megafish 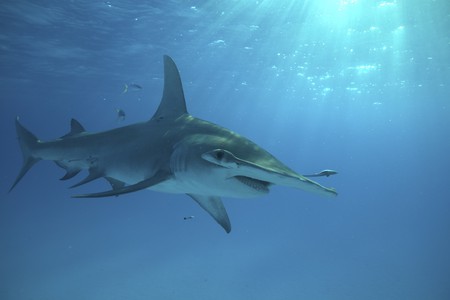 Zeb Hogan, the aquatic ecologist best known for Monster Fish on National Geographic, is back to unravel one of nature’s great unsolved mysteries: why do hammerhead sharks migrate to one tiny Caribbean island for three months every year?

Culture Trip (CT): Tell us about your new show, Zeb’s Big Fish: Hammerhead Invasion.
Zeb Hogan (ZH): In Hammerhead Invasion, I visit the Bahamas to learn why large numbers of adult hammerhead sharks frequent the shallow waters around South Bimini at certain times of year. I team up with the Bimini Shark Lab to satellite tag a large hammerhead shark to follow its migration. Along the way, we catch and tag large bull and tiger sharks, swim with huge schools of reef sharks and stingrays, and explore a mangrove that’s a nursery for lemon sharks. Over the course of the two-week expedition, I see more large sharks, in higher concentrations, than I’ve ever seen in my life. 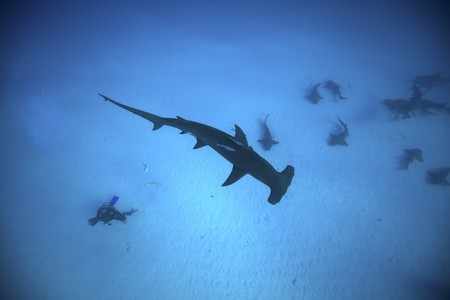 CT: We don’t know much about hammerhead sharks. How have they remained so elusive?
ZH: Fish, generally speaking, are more difficult to study than terrestrial animals. They can be hard to find, harder to catch, and more complex technology is often needed to study them. Great hammerheads are endangered: populations in many areas have collapsed; in some places, they’ve disappeared. On top of that, they are extremely large, powerful, and potentially dangerous animals. They are also oddly sensitive to the stress associated with capture and so can be easily hurt or killed if researchers are not careful.

CT: How wary were you of not disturbing their natural migration patterns?
ZH: We spend a lot of time thinking about both the safety of the crew and the safety of the animals that we film. In the case of great hammerheads, we were working with a research team that has been studying and handling them for over 10 years. They have perfected their research techniques to minimize disturbance to natural behavior and migration patterns. 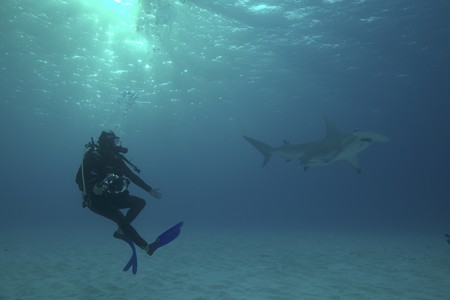 Zeb dives with a Great Hammerhead shark. These nomadic sharks come to Bimini from the deep waters of the gulf stream in search of food. | © National Geographic/Paulo Velozo

CT: What are some of the biggest challenges of filming these creatures?
ZH: Honestly, the biggest challenge is finding the fish. Once we’ve found one, the hardest part of filming is capturing the action in conditions that are less than ideal for the camera crew and equipment. We want the audience to experience the action as intensely as we do as scientists and filmmakers but this takes a lot of planning and forethought. Do we have the right gear? How do we get the angles and shots we need? How do we film underwater or at night when much of our equipment doesn’t work well? Add to that the need to work very quickly for the safety of the animals and it’s a huge challenge.

CT: What are the biggest challenges of filming in the ocean?
ZH: Rough seas, storms, salty water, huge, powerful creatures, lots of complicated and expensive gear, boats, and all the other logistics normally associated with filming. Also, I get seasick, so I have to be able to think and act quickly through it! 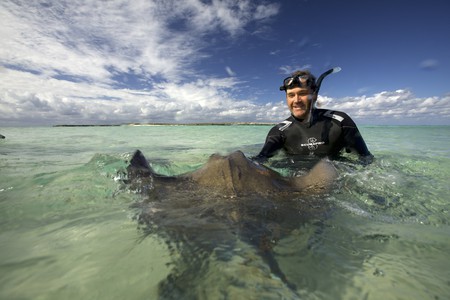 These rays are found in abundance around Bimini and are a favorite food source of Hammerhead sharks. | © National Geographic/Paulo Velozo

CT: What is so special about Bimini for hammerhead sharks?
ZH: Bimini is located inside a huge shark sanctuary, where all species of sharks are protected. They are not the target of commercial fishing when they are in the area and prey species such as stingrays are abundant.

CT: Did you learn anything new about hammerheads or the process of migration?
ZH: I hadn’t worked with great hammerheads before, so everything that I learned was new! Massive, awkward, and odd-looking, they are known for hunting prey hidden in the sand, for making quick turns, and for cruising in shallow water, the huge dorsal fin often breaking the water’s surface – like we’ve all seen in Jaws. The sharks in Bimini are surprisingly unperturbed by divers and it’s possible to get very close. Sometimes we would stay still on the ocean bottom and they would swim by and even bump into us as they searched for prey. Satellite tagging and ultrasound indicate that many of the hammerhead sharks in Bimini may be pregnant females.

CT: Are these megafish misunderstood?
ZH: Many people think of megafish as food or ugly and scary creatures that are best avoided. In reality, they are, more often than not, endangered species that need our help to survive. They are a diverse set of unusual, often beautiful creatures: six-foot trout with green heads and coppery red tails; freshwater sawfish with shark-like bodies and a snout that resembles an old-fashioned lumberjack’s saw. In many parts of the world, megafish are culturally important. They are carved in the walls of the ancient temples of Angkor Wat and depicted in 3,000-year-old paintings on cave walls in northeast Thailand. 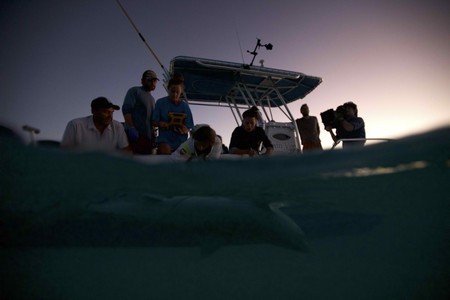 Zeb and the researchers catch and tag a 3 meter Tiger shark in the dark. The shark is upside down in a semi-sleep state known as tonic immobility. This helps the researchers conduct their study and protects the shark from thrashing around and hurting itself on the boat. | © National Geographic/Paulo Velozo

CT: What are the environmental dangers facing these creatures?
ZH: The primary threats to megafish include overharvesting, habitat degradation, and pollution.

CT: Are things getting better or worse?
ZH: For many species, things are getting worse. Many populations, including that of the great hammerhead, have seen dramatic declines in the past 100 years. But it’s not all doom and gloom. Perceptions are changing. Think about our perception of sharks when Jaws premiered in 1975 – people were terrified of sharks and there were programs to catch and eradicate them. Harvests were largely unregulated and shark populations were unprotected. Today, the three largest shark species – great whites, whale sharks, and basking sharks – are all protected. Most people understand that sharks are an important component of a healthy marine ecosystem.